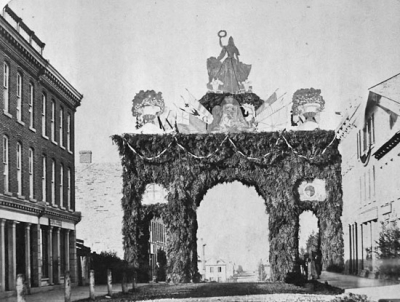 In May 1859, the Legislature of the Province of Canada invited Queen Victoria and her husband Prince Albert to come to British North America “to witness the progress and prosperity of this distant part of your dominions.” Specifically, the Legislature hoped that the Queen would officially open the Victoria Bridge (le pont Victoria), the first bridge to span the St Lawrence River, which joined Montreal on the north shore with St Lambert on the south shore, that was nearing completion. The visit would also “afford the opportunity the inhabitants [of the Province of Canada] of uniting in their expression of loyalty and attachment to the Throne and Empire.”

Queen Victoria regretfully declined the invitation, saying that “her duties at the seat of Empire prevent so long an absence.” Transatlantic travel in the mid nineteenth century was still an arduous journey, taking two weeks or longer, even if the weather was favourable. Instead, she offered to send her eldest son, Albert Edward, the Prince of Wales. It would be a “coming out” event for the nineteen-year old prince who would later become King Edward VII. Her suggestion was enthusiastically embraced. On hearing that the prince would be visiting British North America, U.S. President Buchanan invited him to tour the United States as well.

The extended North American tour took the young prince to all the major cities of the British colonies of North America, as well as to the major cities of the United States as far west as St Louis, Missouri. The prince’s tour naturally included Ottawa, the city selected by his mother to be the new capital of the United Province of Canada in 1857. Fortuitously, construction of the new Parliamentary buildings had commenced at the end of 1859, and the prince was invited to lay the cornerstone of the Legislature building while he was in the city.

The Prince of Wales departed England for North America on 10 July 1860 on board HMS Hero, a 91-gun, screw and sail powered ship of the line, accompanied by HMS Ariadne, a wooden, screw frigate, and was met in Newfoundland by the screw steam sloop HMB Flying Fish. On board the Hero was a true hero–William Hall. The son of a slave who had escaped to Canada during the War of 1812, Hall, was the first Canadian seaman and the first black man to receive the Victoria Cross for gallantry. He received the honour for heroism at the siege of Lucknow in 1857 during the Indian Mutiny.

The Prince and his entourage arrived in St John’s during the evening of 23 July, after having encountered heavy seas and dense fog on the crossing. Although the Newfoundland government knew roughly when the prince’s would arrive, his ship’s entrance through the Narrows caught people by surprise; ship-to-shore telegraph communications was still in the distant future. That night, the city hastily finished erecting ceremonial arches made of evergreens, and put up flags and bunting, in preparation for the prince’s official landing the next morning.

Over the following month, the prince made his way across the Atlantic colonies with considerable pomp and ceremony. After St John’s, he visited Halifax, St John, Fredericton, and Charlottetown, before the royal squadron left for the Province of Canada. It arrived in Canadian waters on 13 August where it was met by the Governor General, Sir Edmund Head, and members of the Canadian government on board two Canadian steamers in the mouth of the St Lawrence River. The flotilla reached Quebec City on 18 August. The first major event was a reception at Parliament House where he was greeted by the Legislative Council and the Legislative Assembly. The prince then knighted the speakers of the two houses of Parliament. He subsequently visited Trois Rivières and then Montreal, where he officially opened le pont Victoria, laying the cornerstone to the entrance to the bridge as well as setting in place a ceremonial “last rivet.” In truth, the bridge, the longest in the world at the time, had been completed the previous year, and was already open for rail traffic.

After a tour of the Eastern Townships, Prince Edward proceeded from Montreal to Ottawa on 31 August. As there was no direct train link, he travelled by way of a special train to Ste Anne-De-Bellevue, followed by boat trip to Carillion, another train ride to Grenville, where he picked up the steamer Phoenix for the last stage of his journey up the Ottawa River. He arrived in Ottawa at 7pm to be met by an armada of one hundred and fifty canoes paddled by several hundred lumbermen dressed in white trousers and red shirts with blue facing. The canoes, flying banners, escorted the steamer the last two miles to the Ottawa wharf. When the Phoenix rounded the Rockcliffe promontory, the Ottawa Field Battery fired a royal salute.

Little Ottawa, with a population of less than 15,000 people, was abuzz with excitement. Nothing like this had ever happened in the rough-and-tumble lumber town. Bunting and flags bedecked every home and office building. Ceremonial arches were built along the route to be taken by the prince and his party through the city. One such arch, spanning Spark’s Street near the Bate building, was constructed of evergreens, interspersed with heraldic shields, mottos, and 60 foot towers. It was topped by two immense urns of flowers and a huge statue of the goddess Minerva clad in armour.

In front of St Andrew’s Presbyterian Church, “four chaste and elegant towers” were erected across Wellington Street “draped and festooned at their caps with cornucopias of flowers, royal standards, shields, and various other appropriate devices.” At the Ottawa end of the Union Suspension Bridge (where today’s Chaudière Bridge stands) to Hull was a massive wooden arch made of 180,000 feet of sawn lumber assembled without a single nail. The wood, worth $3,000, a huge sum in those days, was provided by the company Perley, Pattee & Brown. The suspension bridge itself was decorated with transparencies of the Queen, the Prince Consort, and the Prince of Wales which were illuminated after dusk. Similarly, Sappers’ Bridge, which connected Lower Town and Upper Town, was festooned with hundreds of Chinese lanterns. The Ottawa Citizen commented that “Ottawa appeared lovely and anxious as a bride awaiting the arrival of the bride-groom to complete her joy.”

Unfortunately, the start to the prince’s Ottawa visit was marred by a torrential rain shower just as Mayor Alexander Workman, dressed in his robes of office, commenced his dock-side welcome speech. While he soldiered on despite the soaking, the thousands of onlookers scattered for cover. After the prince thanked the mayor, he and his entourage were taken by carriage to the Victoria House Hotel at the corner of Wellington and O’Connor Streets. In their wake followed a somewhat bedraggled parade of soldiers, firemen, and government employees.

But the next day was bright and sunny for the laying of Parliament’s cornerstone. At 11am, the prince, followed by the Governor General, members of the prince’s party, Canadian Cabinet ministers dressed in blue and gold, and other dignitaries, entered the Parliamentary grounds through yet another triumphal arch; this one decorated in a Gothic style. The cornerstone ceremony was held on a dais under an elaborate canopy, surrounded by wooden bleachers to allow several thousand Ottawa citizens to view the proceedings. Following prayers offered by the chaplain to the Legislative Council, the prince approached the white Canadian marble stone. It bore the inscription This corner stone of the building intended to receive The Legislature of Canada was laid by Albert Edward, The Prince of Wales, on the first day of September MDCCCLX. The stone was suspended from a pulley above a Nepean limestone block in which there was a cavity. Into the cavity was placed a glass bottle containing a parchment scroll detailing the cornerstone ceremony and the names of the day’s participants. A collection of British and Canadian coins were also placed in the hole. The clerk of the works then supervised the laying of mortar, with the prince providing the last touch with a silver trowel engraved with a picture of the Parliament buildings. After the cornerstone was lowered into position, the prince tapped the stone three times. Following more prayers, and after officials had checked the stone with a plumb in the shape of a harp, and a level held by a lion and unicorn, the prince declared the stone to have been well and truly laid. At the end of the ceremony, Thomas Fuller and Chilion Jones of Toronto and Thomas Stent and Augustus Lever of Ottawa, the architects of the three Parliament buildings under construction, were presented to the prince. The royal party then went to view a three-dimensional model of the future library made by Charles Emil Zollikofer, a Swedish-born sculptor.

After a lunch hosted by the legislature in a wooden building on the Parliamentary grounds, the afternoon was taken up with fun and games. After the prince and his entourage had toured the city on horseback to admire the city’s decorations and the many triumphal arches erected for the occasion, they were taken to the Chaudière Falls for a singular Ottawa experience—a ride down the Government log slide used to send wood down river to avoid the falls. Two cribs of timber had been constructed to accommodate the royal party and journalists. Cheered by thousands who stood on the shore or on the many bridges over the slide, the prince shot through it to be met by hundreds of canoes mid river. While the two cribs descended without incident, the Ottawa Citizen reported that “the visages of some of the occupants of the cribs were considerable elongated on descending the first shoot.” A regatta with several canoe races followed.

The evening was marked by a very curious event—a mounted torchlight procession of “physiocarnivalogicalists” to the residence of the Prince of Wales. The members of this obscure order, who billed themselves as “the tribes of Allobrentio Forgissario,” were dressed in some sort of costume. The procession was the source of considerable amusement on the part of onlookers. On reaching the prince’s residence, the group raised a loud cheer, which the prince acknowledged through the window, before they dispersed.

After Sunday services at Christ Church (the predecessor of the current Anglican cathedral) the following morning, the prince visited Rideau Hall, the home of John McKay, the noted New Edinburgh lumber baron, and toured its magnificent grounds. Five years later, the Canadian government leased the mansion for the home of the Governor General; it purchased the home in 1868.

At 8am, Monday, 3 September, the prince and his party, escorted by the Durnham Light Infantry, left Ottawa for Brockville, the next stop on the Canadian leg of his North American tour, via Aylmer, Chats, and Armprior. He did not get back to Britain until the middle of November.

Fifty-six years to the day after the Prince of Wales had laid the cornerstone, his brother, the Duke of Connaught, re-laid it as the cornerstone of the new Parliament Building that replaced the original building, gutted in a mysterious fire in February 1916.

Cellem, Robert, 1861. Visit Of His Royal Highness The Prince Of Wales To The British American Provinces And United States In The Year 1860, Henry Rowsell: Toronto.

The Ottawa Citizen, 1860. “Preparing To Receive The Prince! The Council & Citizens At Work!” 18 August.