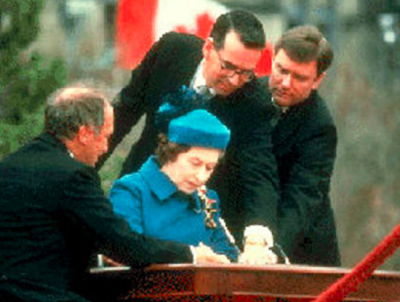 There is no definitive moment in history that marks the birth of Canada as an independent nation. Instead, we have a series of dates representing steps along a constitutional continuum from colonial subordination to complete independence. To complicate matters further, Canada became effectively independent decades before the legal papers were signed. Confusingly, none of the dates coincide with Canada Day on 1 July. Canada Day commemorates the passage of the British North America Act (BNA Act), a piece of British legislation that took effect on that date in 1867, giving birth to the Dominion of Canada. The Act, which set out religious and linguistic rights as well as the respective responsibilities of the federal and provincial governments, became Canada’s constitution. One thing it did not do was change Canada’s status within the British Empire.

Notwithstanding the fuzziness over when Canada became independent, there are two strong contenders for a Canadian “independence day.” The first is 11 December 1931, when the Statute of Westminster received Royal Assent in London. The second is 17 April 1982, when Queen Elizabeth assented to the Constitution Act 1982 in Ottawa. While the former date has its merits, I favour the latter.

When the Statute of Westminster became law on 11 December 1931, the British Parliament renounced its right to enact laws for a dominion without the consent of the dominion government, or to overturn dominion legislation that was considered “repugnant” to English law under the Colonial Validity Act of 1865. The Statute was the culmination of work undertaken by Canadian Prime Minister Mackenzie King, in concert with other dominion leaders, especially South Africa’s J.B.M. Hertzog, at the Imperial Conference of 1926. Leaders agreed that the United Kingdom and dominion governments (Canada, Australia, Union of South Africa, New Zealand, Newfoundland, and the Irish Free State) within the British Empire were in no way subordinate to each other in both domestic and foreign affairs, though all were united through a common allegiance to the Crown, and were freely associated members of the British Commonwealth of Nations.

However, whether the Statute of Westminster implied independence is debatable. In 1959, Maurice Allard, the Progressive Conservative MP for Sherbrooke, was sufficiently convinced that he submitted a private member’s bill in the House of Commons to declare 11 December Canada’s Independence Day. Like most private members’ bills, however, his proposal went nowhere.

Back in 1931, the Statute’s passage was largely ignored; there were no independence-day fireworks. The Ottawa Evening Citizen’s brief coverage was sandwiched between a story on an abducted American co-ed and another on four Christmas turkeys left at an Ottawa police station. Toronto’s Globe covered the Statute on page fourteen. While calling it “an admirable piece of legislation,” the newspaper stated, “But let us be honest, who in Canada, barring a few gentlemen suffering from ‘status’ on the brain, worries about the Statute of Westminster?” In another article, the Globe wrote “As far as Canada is concerned, everything remains virtually as it was before the constitutional hair splitting commenced. Canada has governed herself without any interference from any outside source since 1867; She will continue to do so.”

The Globe was partially right. The last time Britain overturned a Canadian law was in 1873 with respect to an act dealing with oaths. But while Canada was effectively independent when it came to domestic matters, it remained subordinate in foreign affairs. Consequently, when Britain declared war on Germany in August 1914, Canada was automatically committed on Britain’s side. Things were different following the passage of the Statute of Westminster. Britain’s declaration of war on Germany in September 1939 did not mean Canada was at war. To stress Canadian independence, Prime Minister Mackenzie King waited a week before joining the Allies. While Canada and Britain had the same monarch, the Crown had effectively been divided. There was now a British Crown and a Canadian Crown, with the same person wearing both “hats.” The divisibility of the Crown subsequently became a generally-accepted constitutional principle throughout the Commonwealth, with the Queen speaking on the advice of her Canadian prime minister when she is in Canada, and on the advice of her Australian prime minister when she is in Australia, etc.

Notwithstanding the Statute of Westminster, legal and constitutional links with Britain remained after 1931 which continued to place Canada in a subordinate position. The Judicial Committee of the Privy Council in London was Canada’s highest appellant Court until 1949 for civil cases. Canada’s Governors General continued to be Britons for another twenty years; the first Canadian appointed to the post, Vincent Massey, didn’t take office until 1952. Most importantly, the Statute explicitly exempted changes to the BNA Act from its purview. In other words, Canadians were unable to make changes to their own constitution without the consent of the British Parliament. This was not a task the British government had insisted on retaining. Rather, the anomalous situation was due to the inability of the federal and provincial governments to agree on a formula to make constitutional amendments. Consequently, Canada’s Parliament remained subordinate to the British Parliament in one vestigial but important way until the BNA Act was finally patriated in early 1982 by the government of Pierre Trudeau.

On 29 March 1982, Queen Elizabeth, wearing her “hat” as Queen of the United Kingdom, assented to the Canada Act 1982, legislation passed by her British Parliament at the request of the Canadian government to patriate the BNA Act to Canada. Three weeks later, on 17 April 1982, as Queen of Canada, she assented in Ottawa to the Constitution Act 1982, legislation passed by her Canadian Parliament. This Act, which includes Canada’s Charter of Rights and Freedoms, and a constitutional amending formula, forms part of Canada’s Constitution. Other key parts of the Constitution include the BNA Act, renamed in Canada as the Constitution Act 1867, and subsequent amendments.

The decision to patriate the Constitution was highly controversial. Two years earlier, with the failure of a separatist referendum in Quebec on “sovereignty association,” Prime Minister Trudeau had promised constitutional renewal to Quebec. But despite lengthy negotiations, a federal-provincial consensus could not be reached. A major sticking point was the proposed charter of rights and freedoms which many provinces feared would transfer powers from legislatures to the courts. Only Ontario and New Brunswick supported Trudeau. The others, known as the Gang of Eight, which included Quebec, held out. Following last ditch talks in Ottawa in November 1981, and threats by Trudeau to patriate the Constitution without provincial support, a position that the Supreme Court ruled as being legal though not desirable, the Gang of Eight collapsed. In what later became known as the “Night of Long Knives,” a late-night agreement was reached in Ottawa among the leaders of the federal government and nine provinces after Levesque had left the negotiations to go to bed. In his memoirs, Levesque said that “he had been stabbed in the back by a bunch of carpetbaggers.” 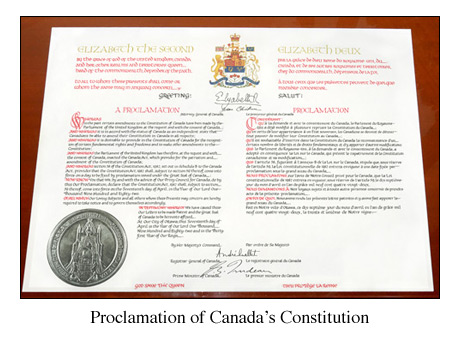 17 April 1982 was a drab, rainy day in Ottawa when Queen Elizabeth appended her signature to the Constitution Act on an outdoor dais setup on Parliament Hill. The proclamation document was also signed by Prime Minister Trudeau, André Ouellet, in his capacity as the Registrar-General, and Justice Minister Jean Chrétien. 32,000 spectators watched the historic occasion, undaunted by torrential rain showers. People started to show up on the Hill as early as 5.30am, five hours before the scheduled event. But the event was clouded by more than just the weather. Quebec, under the separatist Parti Quebecois government of René Levesque, boycotted the event. Instead, Levesque led a demonstration in Montreal against the new Constitution attended by 20,000 people. With considerable hyperbole, the demonstrators called Quebec’s Liberal MPs who supported the new Constitution “traitors,” and the Constitution, a “charter of genocide.”

Trudeau made reference to Quebec’s absence at the patriation ceremony on Parliament Hill. Speaking to the “silent majority” in Quebec, he remarked that the Charter and the amending formula which allows Quebec to opt out of any constitutional change that might touch on language and culture with full financial compensation, did not sacrifice anything “essential to the originality of Quebec.” For her part, Queen Elizabeth, speaking in French, expressed sorrow for Quebec’s refusal to participate in the proclamation of Canada’s new Constitution. She ended her remarks saying “Today, I have proclaimed the new Constitution – one that is truly Canadian at last. There could be no better moment for me, as Queen of Canada, to declare again my unbounded confidence in the future of this wonderful country.”

In the years that followed, attempts were made by the federal government under Brian Mulroney to find a formula acceptable to Quebec. With the failure of both the Meech Lake and Charlottetown Accords in the late 1980s and early 1990s, the constitutional issue was put on the back burner, the nation fatigued by its constitutional problems. The Province of Quebec has still not endorsed the Constitution Act.

Story written by James Powell, the author of the blog Today in Ottawa's History.
Retired from the Bank of Canada, James is the author or co-author of three books dealing with some aspect of Canadian history. These comprise: A History of the Canadian Dollar, 2005, Bank of Canada, The Bank of Canada of James Elliott Coyne: Challenges, Confrontation and Change,” 2009, Queen’s University Press, and with Jill Moxley, Faking It! A History of Counterfeiting in Canada, 2013, General Store Publishing House, Renfrew, Ontario. James is a Director of The Historical Society of Ottawa.
Published in Momentous Events in the City's Life
back to top