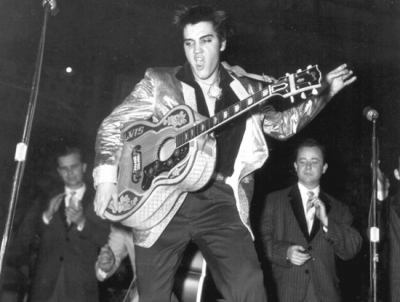 Elvis Presley on stage at the Ottawa Auditorium, 3 April 1957

In 1956 came a musical phenomenon the likes of which the world had never before seen. Elvis Aaron Presley, a poor, twenty-one year old boy from Nashville Tennessee with a ducktail haircut, smoldering good looks and deep blue eyes, took the world by storm. His seductive, wide-ranging voice, and tunes that combined black rhythm and blues with country music, electrified the youth of America, starved for a fresh sound. “Heartbreak Hotel,” released by RCA Victor in January 1956 and Elvis Presley’s eponymous debut LP released two months later were instant successes. Both rocketed to the top of Billboard charts, and stayed there for weeks. On stage, Presley’s singing prowess and sexually-charged performances wowed teenagers, and shocked a deeply conservative American establishment.

After his first album was released, Presley’s career, astutely managed and promoted by Colonel Tom Parker, went into overdrive with multiple appearances by the young singer on U.S. nationwide television, including the CBS Stage Show, the Milton Berle Show, and the Steve Allen Show. An estimated 60 million viewers watched Presley perform on the iconic Ed Sullivan Show in early September 1956. At this appearance, Presley sang the title song of his up-coming movie Love Me Tender for the first time in public. Advance sales of the song went gold before the movie’s release by 20th Century Fox that November. Owing to the wild success of his first appearance on his show, Sullivan invited Presley back twice more over the next four months. Many of his viewers were in Canada, able to pick up the American television signals.

Now a celebrity, Presley went on a multi-city eastern tour in March 1957 which brought him and his backup group, the Jordanaires, to Fort Wayne, St Louis, Philadelphia, Buffalo, and, across the border for the first time, to Toronto and Ottawa. Other than a stop in Vancouver later that year, it was the only time Presley was to perform outside of the United States. After back-to-back shows at Maple Leaf Gardens wearing his famous Nudie Cohen-design gold lamé suit in front of 30,000 adoring fans, Presley and his entourage boarded the overnight train to Ottawa. They arrived in the nation’s capital at 8am on 3 April 1957.

The Ottawa Journal disparagingly reported that Presley skipped lightly like a girl through Ottawa’s downtown Union Station, passing bemused and largely unmoved commuters on his way to an awaiting taxi. The singer was described as “red-eyed and rumpled with sleep,” with “traces of makeup and what looked like mascara” failing “to hide tired lines around the wobble-singer’s Grecian nose.” Presley, who looked like “any Canadian boy who needs a haircut,” was wearing a dark suit, and a velvet shirt, covered by a “crumpled rosy beige raincoat, with smudgy white buckskin shoes.” Protected by “a flying wedge” of police guards and his entourage, he was taken by taxi to an undisclosed location for some much needed sleep, safe from the prying eyes of teenaged fans who were laying siege to the city’s hotels in hopes of catching a glimpse of the young singer.

Later that day, Presley played two sold-out gigs at the old Ottawa Auditorium, located on the corner of O’Connor and Argyle Streets where the YMCA is today. Ticket prices ranged from $2 to $3 for the 5pm show, and $2.50 to $3.50 (roughly $20 to $30 today) for the 8.30pm performance. While Presley was the headline performer, also on the program were Frankie Trent, a tap dancer, and Frankie Connors, an Irish tenor. Needless to say, the warm-up acts were at best tolerated by fans who were there to see Elvis in the flesh. Many had come from afar to be part of the fun. Busloads of teenagers made their way from Cornwall, Ontario, and from upstate New York. A special 10-car special CPR train called the “Presley Special,” or the “Rock N’ Roll Cannon Ball,” brought hundreds of fans from Montreal who paid $11 for the roundtrip, which included the price of admission. Some of the riders were the lucky winners of a Montreal, city-wide contest which asked them to answer the question “Why I would like to go to Ottawa April 3.” En route, four rock and roll guitarists got the fans into the mood.

16,000 mostly teenaged fans saw Elvis at the Auditorium, though a number of adults sporting “I love Elvis” buttons were spotted in the crowd. The singer again wore his trademark gold lamé jacket and gold accessories, but this time chose to wear dark trousers. Keeping to the adage of always leaving them wanting more, his sets were only 40 minutes long, consisting of nine songs. But he played most of his big hits of the day, including Don’t be Cruel, You Ain’t Nothin But a Hound Dog and Heartbreak Hotel. He also sang Love Me Tender, his adaptation of an old U.S. Civil War love ballad Aura Lee (or Aura Lea). Now considered a classic, ranked by Rolling Stone magazine as one in the greatest 500 songs of all time, the Ottawa Journal reporter called Presley’s rendition “a travesty.” It was reported that the gate for the two performances amounted to $45,000, of which Elvis’s cut was $20,000.

Elvis’s trip to Ottawa was not without controversy. As was often the case south of the border, many adults considered Presley’s on-stage gyrations immoral and un-Christian. Across the city, students were warned to behave themselves, and to do nothing that would bring disrepute on themselves or their schools. The nuns at Notre Dame Convent went further, pressuring their students to promise that they would not take part in the Elvis festivities. They kids were obliged to copy from the blackboard and sign a letter that read “I promise that I shall not take part in the reception accorded Elvis Presley and I shall not be present at the program presented by him at the Auditorium on Wednesday April 3 1957.” Some went notwithstanding the pledge. Those caught were suspended by the school, though they were later reinstated following complaints from their parents.

Fearing that crowds of screaming, near hysterical, teenagers might become disorderly as they had been at previous Elvis performances, a hundred special police and guards were on hand to keep control and to stop spectators rushing the stage. But the guards had relatively little to do besides keeping the aisles clear. Although the throngs of fans proved to be well behaved, they were extremely loud. So loud were they that it was difficult for anybody except those at the very front rows in the arena to hear Presley sing. Poor audio facilities at the Auditorium didn’t help either. But most spectators didn’t appear to mind, content to watch Presley do his thing on stage and be part of the event. As reported by the Journal “With every shimmy the idol’s knees further beckoned the floor. The closer they came, the louder became the screams and when he finally rested on the stage floor—thunder!” 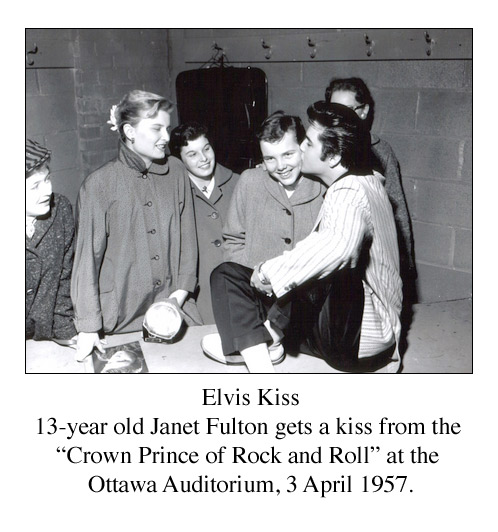 Between performances, a quieter, more subdued Elvis Presley was on display. He greeted a number of young female fans that had been chosen to come backstage, and was photographed with them. Young Janet Fulton, only 13-years old at the time and, fortunately for her, a student at the Sacred Heart Catholic School rather than at the Notre Dame Convent, not only met her idol but received a kiss on the cheek. Presley also gave an interview to Gord Atkinson, host of the CFRA radio’s popular weekly program Campus Corner. Presley politely answered Atkinson’s questions about his sudden popularity, his purchase of Graceland mansion the previous week, his music, and family life. Atkinson then presented him with a scroll indicating that he had been chosen the “Top Artist” by the listeners of Campus Corner. Presley courteously thank him, and replied that he had received more fan mail from Toronto, Ottawa and Montreal than anywhere else.

Pictures were also taken of Elvis Presley with Ottawa jazz musician, drummer Arni May. As union rules required local talent to be hired for the performance, Presley requested that the Ottawa drummer, then only 18-years old, and his orchestra, play with him and the Jordanaires. May recalled that Elvis was a “first-class gentleman,” and had treated him like a friend. May was paid $30 as the band leader; his band members each received $20. May reprised his performance in August 2007 at an Elvis tribute concert at the Pacific National Exposition, fifty years after the singer’s only western Canadian event.

At the end of the evening performance, Elvis left the stage and quickly left the Auditorium never again to return to Ottawa. But behind him, he left memories of a lifetime for thousands of Ottawa teenagers.