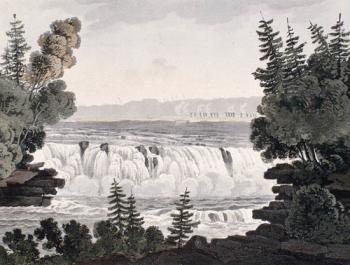 Chaudière Falls on the Ottawa River.

Almost everybody knows that Queen Victoria selected Ottawa as Canada’s capital. But few are aware that the city’s selection was anything but a gentile affair. In fact, the Queen was only asked to help after years of sterile political wrangling between contending factions in Parliament. There were more than 200 votes on the issue. Even after the Queen had made her choice, it didn’t go down well with some and was challenged in Parliament. At the end of the day, Canadian legislators only narrowly ratified the Queen’s decision; a change of three votes from yea to nay would have nixed it.

It all began with the merger of Upper and Lower Canada to create the united Province of Canada in 1841 consisting of Canada West (Ontario) and Canada East (Quebec), each equally represented in Parliament, under the joint leadership of a premier from each of the two Canadas. The Governor-General, Lord Sydenham, convened the first opening session of the united parliament at Kingston on 14 June 1841. While Kingston residents were delighted to be living in the de facto capital of Canada, others were less enamoured with Lord Sydenham’s choice. Canada East representatives had hoped that either Quebec or Montreal would have been chosen as both were far larger in population and had more to offer in the way of amenities for debate-weary members of parliament. However, Canada West was insistent on hosting the new capital. As Kingston satisfied Canada West’s requirement, Canada East representatives reluctantly acquiesced on the grounds that at least it wasn’t Toronto.

But Toronto-area MPs weren’t satisfied either. They submitted a bill calling for Parliament to meet alternatively in the old capitals of Toronto and Quebec City. This bill passed though the outcome satisfied few. MPs agreed in 1842 to examine three resolutions each favouring a different city as the permanent capital—Montreal, Toronto, or Bytown, as Ottawa was then called. All motions were defeated, with Bytown receiving the fewest votes, only 6 for against 57 opposed.

In 1843, Canada’s Attorney General moved that Montreal be chosen as the capital. This motion passed on a vote of 55 to 22. Toronto and Quebec City were rejected as being too far from the geographic centre of the newly united Province of Canada. Bytown too failed despite its favourable geographic attributes—it bordered both provinces, was pretty much equidistant between Toronto and Quebec, and was located at the mouth of the militarily important Rideau Canal, safely distant from the United States. But politicians and bureaucrats looked in horror at the idea of decamping to an isolated “Arctic lumber village,” with a population of perhaps 5,000. Its tumbledown wooden buildings offered few creature comforts, especially in the midst of a harsh Canadian winter. Cosmopolitan Montreal was a far better choice. There, public servants could enjoy the social and commercial attractions of a well-established city that boasted a population ten times that of Bytown. It was also located on the St. Lawrence, Canada’s vital trade route to the Atlantic.

In November 1844, Parliament moved from Kingston to Montreal on news that Queen Victoria had graciously approved the selection of that city as Canada’s capital. Montreal had seemingly won the day. However, less than five years later, Montreal blotted its copy book when a mob protesting the passage of the Rebellion Losses Act that compensated “rebels” as well as “loyalists” for property destroyed in the 1838 Rebellion burnt down Canada’s Parliament buildings. Reconvening in Toronto, politicians decided against returning to unstable Montreal and instead agreed once again that Parliament would alternate between Toronto and Quebec City. This was a patently nutty decision given the difficulty and cost of moving Parliament and its supporting bureaucrats and files every few years—the Grand Trunk Railway linking Toronto to Quebec had yet to be built.

In 1854, Sir Richard Scott, the mayor of Bytown and later member of the Legislative Assembly for Ottawa, renewed the campaign to make Bytown the capital. In 1856, Canada’s Attorney General moved for a definitive selection of a permanent capital. MPs were given a choice between Toronto, Hamilton, Quebec, Montreal, Kingston, and newly re-named Ottawa. In a veritable blizzard of motions for and against each city, Quebec City emerged the victor by a vote of 64 to 56. The lower house also voted in favour of providing £50,000 ($250,000) to fund the construction of new legislature buildings. Unfortunately, the Legislative Council (equivalent to today’s Senate) refused to support the funding. No funding meant no capital for Quebec City.

The political impasse continued into 1857. In a series of motions, Ottawa garnered only 11 supporters out of a 130-member house though no other city could attract a majority. To break the impasse, a resolution asking Queen Victoria to make the choice passed the Legislative Assembly, though only over stiff opposition by members who considered royal mediation as undermining the Canadian government’s newly-gained responsibility for domestic affairs. The mayors of Toronto, Montreal, Ottawa, Kingston and Quebec City subsequently received letters from the Governor-General, Sir Edmund Head, asking them to prepare papers setting out their respective cities’ merits. 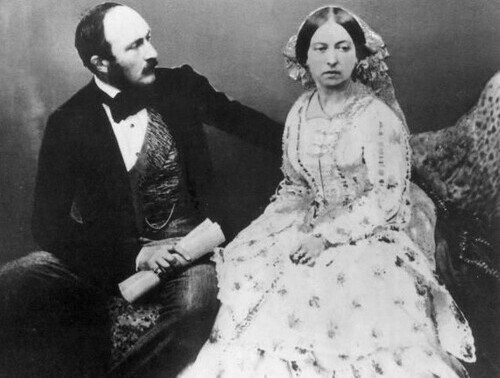 Queen Victoria and Prince Albert, 1854. Photo by Roger Fenton.This set in motion feverous activity in candidate cities. In Ottawa, the City Council set up a special meeting of leading citizens, including Sir Richard Scott and Mr. R. J. Friel, to draft a memorial to the Queen setting out Ottawa’s many advantages.  Other cities did likewise. Kingston, Montreal and Quebec also sent delegations to London to lobby for support. In the end, Ottawa won the day, a choice favoured by the Governor General. Some say that Ottawa also received unofficial support from Lady Head, the G-G’s wife, who apparently was a good friend of the Queen. The story goes that the Heads had been invited to a picnic lunch in Ottawa held at what would later become Major’s Hill Park. Enchanted with the area and its wonderful river views, Lady Head, an amateur watercolourist, made a number of sketches that she shared with the Queen. Ottawa apparently had other high placed supporters, including Prince Albert, Queen Victoria’s Consort.

The Queen received all the documents by October 1857. After reviewing the material sent to her and consulting with her advisers, she selected Ottawa. Her decision was officially relayed to Canada’s Governor General by Henry Labouchere, the Colonial Secretary, in a letter dated 31 December 1857.

This did not end the debate, however. A motion asking the Queen to reconsider her decision was  introduced in July 1858 by the opposition led by The Globe newspaper’s radical editor George Brown. The opposition motion passed the House by a vote of 64 to 50. Then things got really weird. The defeated Conservative-led government of John A. Macdonald and George Étienne Cartier, his Canada East confederate, resigned, howling that the opposition motion was an affront to the Crown. With George Brown and his Canada East ally, Antoine-Aimé Dorion, assuming power, it looked like Ottawa’s hopes to be the capital were to be dashed. But the Brown-Dorion government fell after only four days. 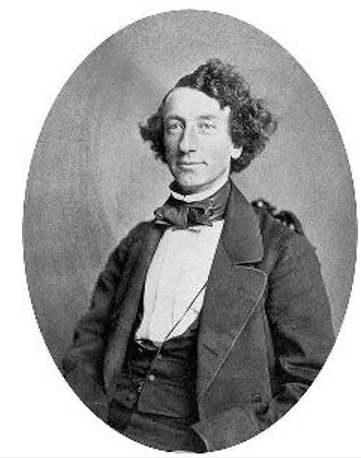 J. A. Macdonald, 1858. Unknown photographer.Under the legislative rules of the day, newly appointed Cabinet ministers were obliged to resign their parliamentary seats and seek re-election before assuming their positions. Brown’s newly minted ministers duly resigned following their appointments. In a snap vote of no confidence, Macdonald and Cartier defeated the new Brown-Dorion administration shorn of its Cabinet ministers. When the Governor General refused to call a general election, Brown resigned, and Macdonald and Cartier were asked back to form a government.

Everybody thought that Macdonald and his new ministers would also resign their seats and seek re-election, leaving the new Conservative government at Brown’s mercy. But, taking advantage of another Parliamentary rule that allowed ministers to change portfolios within a 30-day period without having to seek re-election, Macdonald simply appointed the ministers in his old government to different Cabinet posts before reshuffling them back to their original positions. Macdonald, temporarily Postmaster General, ended up as Deputy Premier rather than Premier in the new government. It seems that the Governor General was worried about the optics of Macdonald regaining the premiership and insisted that Cartier become Premier, at least officially. This sneaky, or brilliant (depending on your point of view), political manoeuvre became known as “The Double Shuffle.” With Brown-Dorion out and MacDonald-Cartier back in, Ottawa’s prospects were restored.

There was one more vote to ratify Queen Victoria’s decision. Held in early 1859, the vote in favour of Ottawa squeaked through with a majority of only 5 votes.

The Ottawa Evening Citizen 1925. “How Ottawa Was Chosen The Capital of The Dominion,” 25 June.