The History of Ottawa 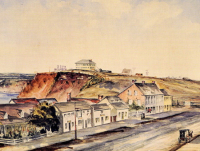 We are fortunate to live in one of the world's most beautiful cities and history is all around us. Most of us really don't know of more than a few of the contributions that have been made by Ottawa citizens and institutions.

Ottawans have contributed much to Canadian folklore, inventions, science and economic, social and cultural growth of Canada, not to mention the political goings on that have been part and parcel of the City's history since 1867 and before.

... to tell the stories of some of the people who have lived here over the last 175 years.

One purpose of this series of columns is to provide information on some of these happenings and also to tell the stories of some of the people who have lived here over the last 175 years. First, the native peoples and then the French explorers and Courieres-de-bois. Then came some people up from the new United States who had stayed loyal to the British Crown during the American Revolution After the War of 1812, the British government decided military preparedness had to be improved and Colonel John By was sent here to build the Rideau Canal. With him and his construction plans came English officials, Scottish stone masons and Irish labourers to join the Natives and French who were already here.. From this earliest time, we have the stories of Colonel By, Duncan McNabb (who, it is said, still haunts the Bytown Museum and the famous lumberjack Joseph Montferrand, better known to Stompin' Tom Connors as Big Joe Mufferaw. Early settlers built their homes, churches and schools. In 1831, a publication that sought to attract emigration to Canada said the lands “about the Canal” should soon become very valuable and ecouraged settlers there “lest some lynx eyed American be attracted”. He commented that the country around there is very beautiful and suitable for farming.

“The scenery about Bytown is, next to that at the Falls of Niagara, the most picturesque of the inhabited regions of Canada”.

Wm. Catermole who wrote the pamphlet achieved his purpose. The “Smith's Gazetteer” published in 1846 gives a goodly amount of detail about the place then called Bytown. Smith's report also speaks to the beauty of the area. He says “The scenery about Bytown is, next to that at the Falls of Niagara, the most picturesque of the inhabited regions of Canada”. He notes the town has some 7000 inhabitants divided between Upper and Lower towns, and is principally supported by the lumber trade. Inhabitants of Lower Town are said to be about one third French and that the remainder are “principally Irish” There are five churches in Lower Town and three in Upper Town. There are three weekly newspapers—the “Ottawa Advocate”, the Bytown Gazette” and the “Packet”. .. Mail was available each day, carried on horseback from Kingston.

On the entertainment front there were a “Commercial Reading room” and a “Mercantile Library Association”, four taverns in Upper Town and thirty five taverns plus twenty beer shops in Lower town. Two breweries manufactured products for the above! Health care was provided by a physician and surgeon and four druggists, while legal needs were served by seven lawyers Economically, allowing five dollars to the pound sterling, over $1,700,000 in timber was shipped—white pine, red pine, oak and elm and saw logs. Logs were worth about $2.50 each and timber pieces were anywhere from 15 to 25 cents a foot.

Land values had risen rapidly eg “The land on which the Upper town is erected, together with a portion of that comprising the Lower Town, was purchased some years ago for the sum of $400, and is now computed to be worth some $250,000 to $300,000” Much more is contained in the “Gazetteer” on the various trades in Bytown, educational facilities and stores. If readers are interested more can be published later. Catermole's prediction was achieved!. Bytown had grown considerably in fourteen years and much more was to come!

A few questions:
(1) By what margin did drinking establishments outnumber churches?
(2) What year is represented by the facts above?
(3) From what source do you think those seven lawyers made their incomes?