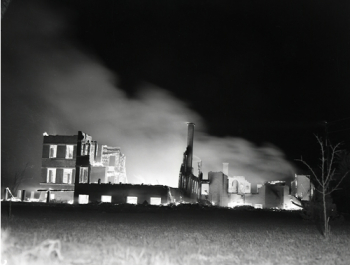 Tuesday, the 15th of May 1956 was an unremarkable spring day. The Grey Nuns of the Cross who were staying at Villa St-Louis on the bank of the Ottawa River in Orléans a few miles east of Ottawa went about the timeless routine of convent life. After celebrating Compline, the final church service of the day, the thirty-five mostly elderly residents retired to their spartan cells for the night. There should have been more people staying at the 70-room rest and convalescent home built just two years earlier for $1 million. A group of sixteen student nurses who were about to start a two-week vacation at Villa St-Louis had delayed their arrival to see a play in downtown Ottawa.

As the nuns slumbered, two CF-100 “Canuck” Mark V interceptor jet fighters from the 445 Air Squadron based at RCAF Station Uplands were in the dark skies above Ottawa. The fighters had been scrambled to seek out and identify an intruder that had entered their operational airspace. The CF-100s were the most sophisticated flying machines in the RCAF arsenal. They were built by A.V. Roe Canada Ltd, also known as the Avro Canada Company, at the time one of the largest corporations in Canada. The company later became famous for the ill-fated Avro Arrow (CF-105), possibly the most advanced fighter aircraft of the age, cancelled by the Diefenbaker government in 1959.

The fighters were scarcely in the air when the intruder was identified as an RCAF North Star cargo airplane, a four-engine propeller aircraft, travelling from Resolute Bay high in the Arctic to St Hubert, near Montreal. Although the airplane had filed a flight plan, the information had not been received at Uplands. So when an unidentified “ping” appeared on the radar screen, the interceptors were sent up, consistent with military protocol at the height of the Cold War.

With the mystery quickly resolved, one CF-100 returned to base. While accounts vary, the other aircraft, number 18367, piloted by Flying Officer (FO) William Schmidt (age 25) with navigator FO Kenneth Thomas (age 20), apparently asked Uplands for permission to join up with two other Canuck fighters that were heading south at 35,000 feet. The request was denied. So, Schmidt continued west to burn off excess fuel before landing. It was the last flight control heard from the aircraft that vanished from the radar screen over Orléans, falling from 33,000 feet in less than a minute. There had been no hint of trouble. 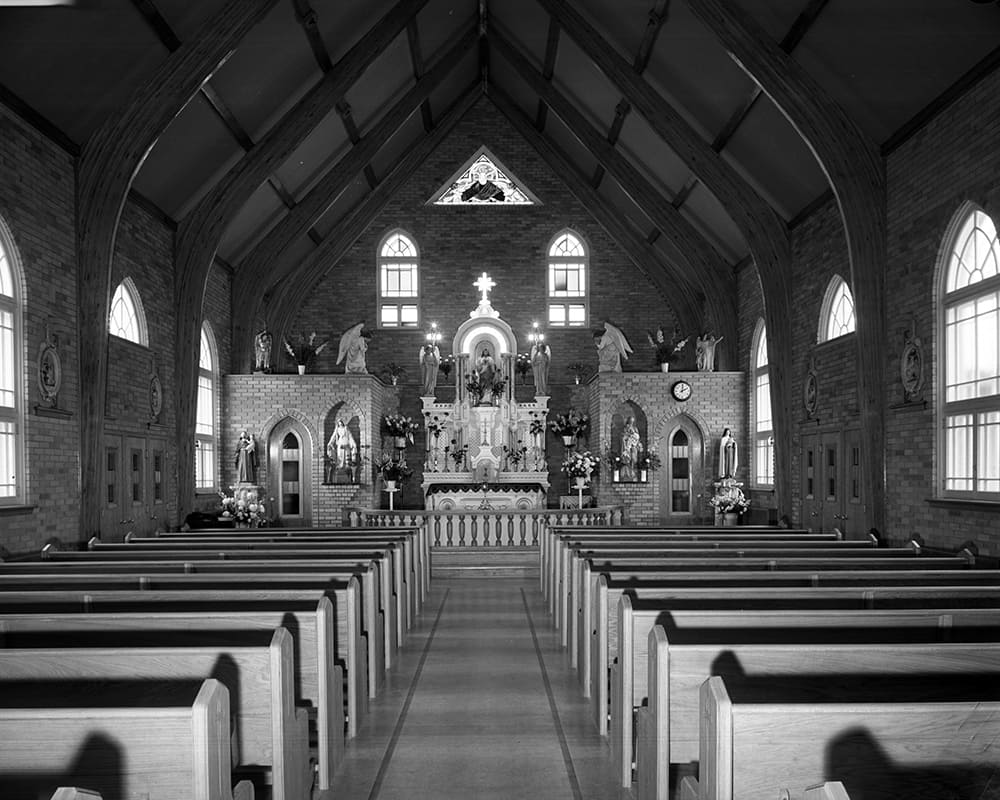 Interior of the Villa St-Louis Chapel, Orléans, circa 1956, City of Ottawa Archives, MG393-NP-31447-001.At 10:17pm, the CF-100 fighter, fully armed with rockets and machine guns, and with its two crew members aboard, plunged into the chapel of the Villa St-Louis rest home at a speed approaching 700 mph. In an instant, the three-storey, brick building was shattered by a thunderous explosion that sent debris and flames hundreds of feet into the air. Eyewitnesses said the jet had plummeted to ground in an almost vertical dive, the airplane spinning in tight circles, its wing lights flashing in the dark.

The blast could be heard fifteen miles away. A red glow in the sky was seen in distant Richmond and Manotick. A Trans-Canada Airway (TCA) pilot flying from Montreal to Toronto witnessed an orange ball of fire that lit up the whole sky for seconds. The Villa’s neighbours in the nearby residential area known as Hiawatha Park were thrown from their beds by the force of the blast that also shattered twenty-four windows in St Joseph’s School a mile and a half away. The explosion and ensuing fire, stoked by gallons of aviation fuel and tons of coal stored in the convent’s basement, totally destroyed Villa St-Louis. Within five minutes, the roof of the building collapsed. Two hours later, there was virtually nothing left save a forty-foot chimney and steel girders twisted in the white heat of the blaze.

The speed and intensity of the fire left little time for survivors from the crash to escape. Sister Marie des Martyrs recounted that she had gone to bed at about 9.30pm but had trouble falling asleep. Shortly afterwards, she heard the sound of a low flying airplane—not an unusual sound given that Rockcliffe air force base was but a short distance away. Suddenly, the building was shaken by a terrific explosion that sounded like a thunderclap, followed by splintering wood and breaking glass. There was fire everywhere. Putting on her slippers and robe, she joined other nuns making their way to the fire escape. There was no panic. She descended to the bottom of the fire escape but flames had already reached the lower floor, partially blocking her exit. However, she managed to jump clear and landed uninjured. She believed that she was the last to get out alive.

On being awakened by the explosion, neighbours of Villa St-Louis in Hiawatha Park courageously ran across farmers’ fields to the stricken rest home to help. Many were regular attendees at Mass in the convent’s chapel and knew the resident nuns by name. Rhéal (Ray) Rainville, whose home was less than a mile from the Villa, helped a number of sisters escape from the burning convent. He broke the fall of one elderly resident who leapt from the third floor. He also witnessed the death of Father Richard Ward, the chaplain of the Grey Nuns, who had been blown 150 feet from the Villa by the force of the blast. The priest died in the arms of Joseph Potvin, another neighbour. Lorne Barber, who managed to enter the building, tried to force his way into bedrooms but flames turned him back. He could hear the screams of nuns pounding on the walls for help. Meanwhile, others tried to enter the burning building through its ground floor doors.

Rescued nuns, many burnt or with broken bones, huddled together in the nightclothes on the lawn outside of the burning building. The distraught sisters were taken in neighbours’ cars or by ambulance to the hospital or to their mother-house in downtown Ottawa. The first survivors arrived at about midnight. Many of the injured were sent to the Ottawa General Hospital where they were cared for by the student nurses who were to have begun their holiday that evening at the destroyed home.

Three fire departments, Orléans, Gloucester and the Rockcliffe Air Station, responded to the blaze. But there was little that they could do. RCAF personnel set up road blocks in a vain attempt to stop thousands of spectators from approaching the area. People simply climbed over fences and walked through ploughed fields to get a good look. Cars were parked alongside roads for miles before police began turning vehicles away. People stayed until the early hours of the morning before returning home when the blaze was finally extinguished, aided by a light rain. Many were back at first light.

The next day, the grim task of recovering and identifying the bodies began. Of the thirty-five residents of Villa St-Louis, there were thirteen deaths, eleven Grey Nuns, a lay-woman cook, and Father Ward. Also dying in the crash and explosion were the two young flying officers. Many others were injured by the fire or suffered broken bones. As well as looking for human remains, RCAF specialists combed through the debris to recover the unexploded rockets that the CF-100 carried. Within hours, all but one had been safely found. Souvenir hunters were warned that the missing rocket was dangerous in the wrong hands.

The improbability of the disaster shook Ottawa and neighbouring communities. How could an airplane on a routine interception mission fall out of the sky and strike an isolated convent? Even a slight deviation in the airplane’s flight path would have spared the Villa. Why was such pain and suffering inflicted on a religious order devoted to the care of the sick and injured? What was God thinking? There were no answers to these questions.

Despite subsequent inquiries, the cause of the fatal crash was never ascertained. The two flying officers never sent a distress signal, nor did they use their ejector seats that were standard equipment on CF-100 airplanes. The most likely explanation for the crash was a malfunction in their oxygen system that caused the two men to lose consciousness. This would explain the radio silence in the seconds prior to the crash. The accident report also raised two other possibilities. It was conceivable that the pilot had tried to descend through a gap in the cloud cover and experienced a “tuck under” at supersonic speeds. A “tuck under” can occur when the nose of an airplane continues to rotate downward (i.e. tuck under) at an increasing speed during a high-speed dive. This phenomenon has been known to be fatal if the pilot cannot control the descent owing to high stick forces. Alternatively, Schmidt might have lost control of his aircraft in heavy turbulence caused by the wash of the two other CF-100 fighters that were in the area.

The funeral for Father Ward, who in addition to being the chaplain to the Grey Nuns was also assistant Roman Catholic chaplain to the Fleet, was held the Friday after the disaster at St Patrick’s Church. Archbishop Roy of Quebec, the Bishop Ordinary of the Canadian Armed Forces, officiated. Along with the Grey Nuns, representatives of every congregation of nuns in Ottawa attended. He was buried in Toronto. The following day, a joint funeral service was held for the eleven nuns at Notre Dame Basilica. Thousands of Ottawa citizens lined Sussex Street to witness the funeral cortege—eleven coffins covered by simple grey cloths followed by seven hundred mourning Grey Nuns. Archbishop J.M. Lemieux officiated at the funeral Mass. The deceased were buried in Notre Dame Cemetery.

The following week a memorial service was held for FO William Schmidt and FO Kenneth Thomas, the two flying officers who died in the crash, as well as for a third airman, Flight Lieutenant Al Marshall, who had been killed in the crash of another CF-100 Mark V at a U.S. Armed Forces airshow at Sault Ste. Marie, Michigan on the weekend after the Villa St-Louis tragedy. 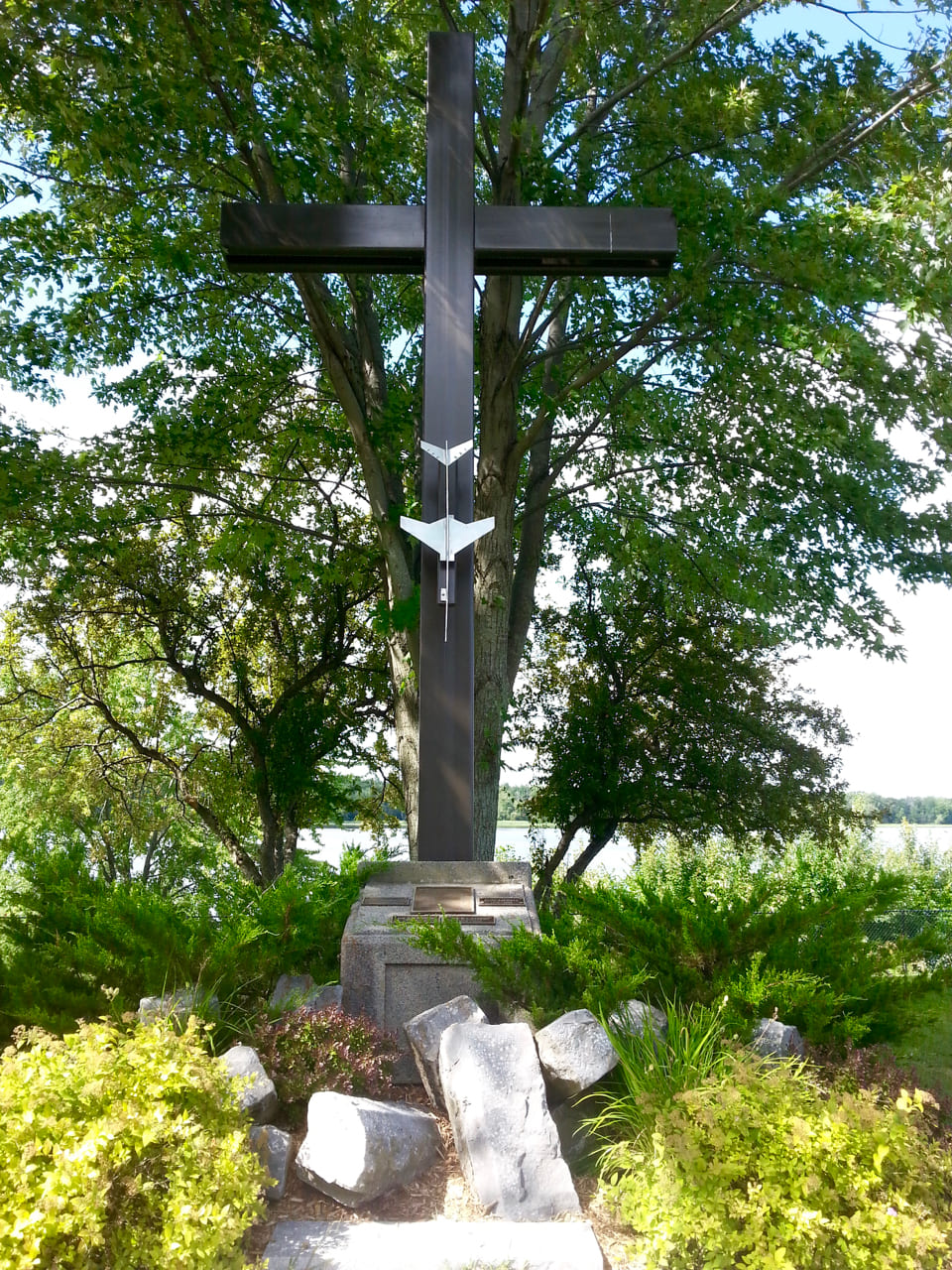 Memorial Cross at the site of the Villa St-Louis disaster, August 2017 by Nicolle Powell.

Today, not far from Residence St-Louis, a francophone seniors’ home that replaced the ill-fated Villa St-Louis, a twenty-foot cross embellished with a jet fighter pointing downwards, marks the spot of the tragedy. At its base are fifteen stones, one for each victim, taken from the convent’s rubble. Plaques list the names of the nuns, the priest, the lay cook, and the two flying officers who lost their lives.

In 2016, sixty years after the disaster, sixty veterans and RCAF members, along with friends and family of those who perished, gathered at the site to remember the lives that were lost that dreadful night in 1956. A bagpiper played the Piper’s Lament.