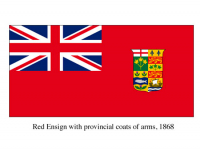 Of course, views evolved and shifted over time. During the early, uncertain years immediately after Confederation, support for the British connection was very strong, politically and emotionally. With the United States casting an avaricious eye northwards, you can appreciate this sentiment. Even Quebecers were content to live under the British flag, in a land that provided a constitutional guarantee for their religious and linguistic rights. The flag most commonly, but unofficially, flown at that time was the British Red Ensign with the provincial shields of the four founding provinces on the fly. As additional provinces joined Confederation, their arms were added.

While a Red Ensign with a Canadian coat of arms on the fly was approved by the British Admiralty for use by Canadian-registered ships in 1902, at home things seemed to go backwards. The federal government began flying the Union Flag, or Jack, over Parliament Hill after the Boer War reflecting the prevailing strong imperial feelings. But nationalist sentiment surged during World War I. Although Canadian soldiers fought under the Union Flag, they were identified by a maple leaf emblem on their uniforms. With Canada coming of age on the battlefield, and amidst growing national confidence, there was heightened interest in developing a distinctive Canadian flag. In 1922, the government of Mackenzie King replaced the provincial crests on the Red Ensign with the arms of Canada. Two years later, this new Canadian Red Ensign was authorized for use abroad to help identify Canadian foreign legations. However, the Union Flag continued to fly at home. 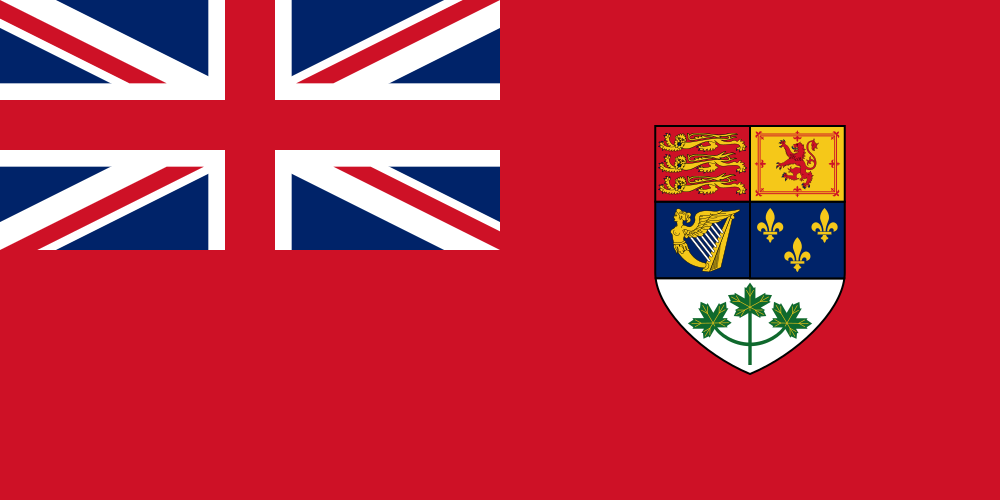 Canadian Red Ensign used from 1922-1957. In 1957, the colour of the maple leaves was changed to red.The first flag debate started innocuously. In 1925, the Department of National Defence, noting that the Canadian Red Ensign was used on Canadian-registered ships and at overseas legations, asked for something distinctive to fly at home. King set up a committee of civil servants to come up with something. When news leaked to the press, a firestorm of opposition was ignited, especially in loyalist Ontario. Demands were made for a parliamentary resolution to confirm the Union Flag as the only official Canadian flag. Heading a minority government, King wilted under the pressure. Disbanding the flag committee, he said that there would be no change in flag unless sanctioned by Parliament.

The Statute of Westminster which effectively gave Canada its independence in 1931 spurred renewed efforts to design a national flag. World War II provided an additional fillip as Canadian servicemen abroad strongly favoured fighting under distinctive Canadian symbols. When Prime Minister King met Winston Churchill and Franklin Roosevelt in Quebec City in 1943 to plan the invasion of Nazi-occupied Europe, the Canadian Red Ensign flew proudly between Britain’s Union Flag and the American Stars and Stripes over La Citadelle. The following year, the Canadian Red Ensign was authorized for use by the Canadian Army on land. It temporarily replaced the Union Flag on the Peace Tower at Parliament Hill on Victory-in-Europe Day (8 May 1945), and became a permanent fixture there following an order-in-council on 5 September 1945. 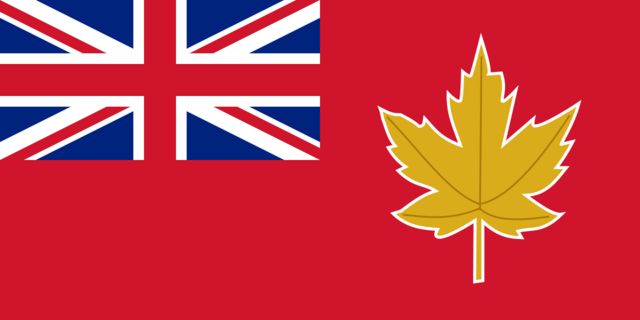 Proposed Flag, 1946Late in 1945, King tried again to come up with a new national flag. A committee examined roughly 2,700 designs submitted by the general public, the majority of which featured some sort of maple leaf motif. But the committee, like its 1920s’ predecessor, struggled to find a compromise between nationalists and imperialists. A vocal minority demanded the Union Flag to be retained. The committee finally agreed to a modest change—the Red Ensign adorned with a gold maple leaf instead of the Canadian arms on the fly. Although it received King’s approval, it didn’t go over well among nationalists both inside and outside Quebec who wanted to eliminate all foreign symbols. With the country still divided, the flag issue returned to the back burner and left to simmer for another twenty years.

The great flag debate of 1963-64 pitted Lester B. Pearson against John G. Diefenbaker. Pearson, at the head of a minority Liberal government, promised that Canada would have a new flag in time for its 1967 centennial. His point man on the flag issue was John Matheson, the Liberal MP for Leeds. Drawing on earlier maple-leaf proposals, and using the red and white colours of Canada proclaimed by King George V in 1921, he suggested a design of three red maple leaves on a white field. Matheson’s simple but striking proposal was subsequently modified by designer Allan Beddoe who added two vertical blue bars on either side to represent the Pacific and Atlantic Oceans. A delighted Pearson presented this design to Parliament in June 1964. 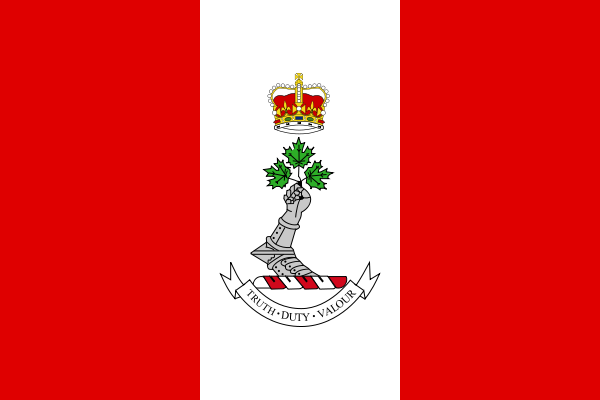 Flag of Royal Military College, Kingston, Ontario As in the past, the country was riven over the flag question. Diefenbaker, the old Conservative who cherished the imperial connection, fought tooth and nail against what he derisively called the “Pearson pennant.” Canadian veterans, who favoured retaining the Canadian Red Ensign, booed and hissed at Pearson when the prime minister came to address the Winnipeg Legion in May 1964. But a majority of Canadian were ready for change. A special 15-member committee, chaired by Herman Batten, was given the herculean task of finding a new flag. After gruelling discussions and the consideration of roughly 3,500 suggestions sent in by Canadians, three design archetypes made the finals: a flag containing the Union Flag or fleur-de-lys, a three-leaf flag represented by the Pearson pennant, and a one-leaf flag represented by the red and white maple leaf flag. The third design was inspired by the flag of the Royal Military College in Kingston, Ontario. In March 1964, Col. George Stanley, the Dean of Arts at RMC, suggested to John Matheson that the RMC’s red and white flag might make a suitable national standard if the RMC crest were replaced with a red maple leaf. With a little tweaking of the design to enlarge the white central panel to better display the single, eleven-point red maple leaf of designer Jacques St. Cyr, our flag was conceived.

When the committee came to choose among the designs, Matheson outmanoeuvred the Conservatives. On a series of votes, the Canadian red ensign was eliminated, as was any new design containing the Union Flag or fleu-de-lys. That left in contention the Prime Minister’s three-leaf flag and Col. Stanley’s one-leaf flag. Expecting the Liberals to support their leader’s cherished “pennant,” the Conservatives voted for the one-leaf flag. But Matheson, realizing that Pearson’s choice was a non-starter, had already solicited the other members’ support for the one-leaf design. When the secret ballots were tallied on 22 October 1964, Conservative members were horrified to discover that it was a unanimous committee decision for the red and white, single-leaf flag. 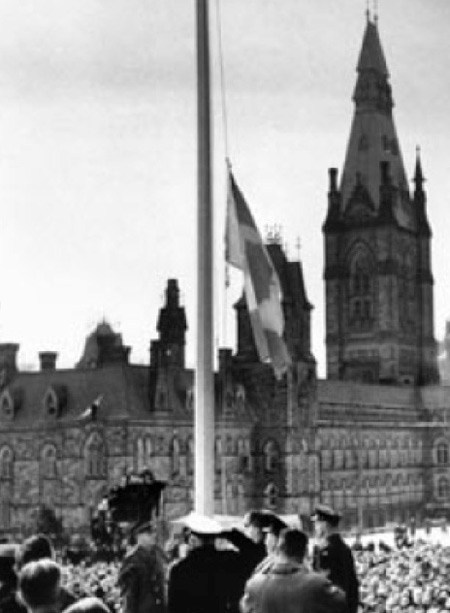 The Maple Leaf flag flies for the first time, 15 February 1965The kicking and screaming continued in the House of Commons for the next two months but this time the end was in sight. After closure was applied to limit debate, weary MPs voted 163-78 for the single-leaf design at 2:00am on 15 December 1964. Two days later the Senate passed the necessary legislation, and on 24 December Queen Elizabeth gave her approval. A Royal Proclamation, describing Canada’s new flag in appropriate heraldic terms, was released on 28 January 1965.

At noon, on 15 February 1965, in front of a crowd of 10,000 on Parliament Hill and in the presence of the Governor General, Georges Vanier, Prime Minister Pearson, and an unhappy Diefenbaker, RCMP constable Gaetan Secours lowered the old Canadian Red Ensign for the last time and raised Canada’s new national standard. As the Governor General’s flag was flying on top of the Peace Tower as protocol demanded, our new national flag was raised on a temporary flagstaff set up specially for the occasion. When it reached the top of the pole, a timely puff of wind unfurled our now much-beloved, red and white, Maple Leaf Flag for all to see. Canada’s official national flag was born.

Canada Heritage, 2014. Birth of the National Flag of Canada.