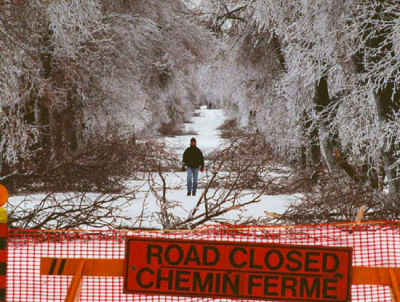 Ottawa’s citizens claim that their city is the second-coldest capital city after Ulaanbaatar, Mongolia. While this may or may not be accurate, it’s undeniably true that you better pack your woollies if you are planning a winter visit. During the month of January, the city experiences frigid temperatures of below -9°C more than half the time, with the thermometer occasionally dipping to -30°C, or lower.

Despite Ottawa’s frosty reputation, the winter of 1997-98 began significantly milder than usual, with the city’s temperatures moderated by the impact of el Niño, a warm current that arrives around Christmas off the Pacific coast of Latin America. Usually, the current is relatively weak and is of little meteorological consequence. However, every several years, the current is warmer than usual and can have a major effect on atmospheric conditions across North America. In the fall of 1997, el Niño arrived much earlier and was far warmer than usual. The water temperature in the eastern Pacific rose by more than 4 degrees Celsius, the most in more than 50 years. In December 1997, Ottawa’s average temperature was several degrees above normal leading to complaints from winter enthusiasts about the lack of snow.

With mild weather persisting, a powerful low pressure system stalled in early January 1998 across the Great Lakes, its eastward path blocked by a large high pressure system over Labrador as well as an unusually strong Bermuda-Azores high over the North Atlantic. As the Labrador high pressure swept cold Arctic air southward into Ontario and Quebec, the low pressure system pumped warm moist air from the Gulf of Mexico northward. Slipping below the warm Gulf air, the heavier Arctic air began to collect in the Ottawa and St. Lawrence River valleys. The conditions were ripe for a significant accumulation of freezing rain.

Freezing rain is precipitation that falls when the temperature is below 0°C in the form of super-cooled rain rather than as snow or ice pellets. The water droplets freeze on contact, coating all exposed surfaces with a layer of ice. This phenomenon occurs when a thin layer of cold air is trapped beneath a thick layer of warm air. Moisture, which at high altitudes may start to fall as snow, melts when it passes through the warm air zone. The resulting water drops have insufficient time to re-freeze into ice pellets when they pass through the thin layer of cold air immediately before hitting the earth. Located in a valley, Ottawa and its neighbouring communities are frequently hit by freezing rain, experiencing at least a dozen episodes in an average year. But what they were about to experience in January 1998 was anything but average.

At 3.00am on the morning of 5 January, freezing rain began to fall in Ottawa. With temperatures hovering close to the freezing point, it didn’t stop, other than for an occasional pause, until 4.00pm four days later. The storm was massive. At its height, freezing rain was falling from southern Ontario, through to Kingston, Ottawa, Montreal, the eastern townships of Quebec, parts of New Brunswick and Nova Scotia, upstate New York and New England. In total, Ottawa received 85 millimetres of precipitation over that period, most of it in the form of freezing rain. Montreal and Cornwall, located in the St. Lawrence River Valley, fared even worse, each getting more than 100 millimetres of precipitation.

Quickly, all exposed surfaces— every road, sidewalk, building, branch and power line—became layered with a thick coating of ice exceeding three centimetres thick. Roads became impassable. Branches littered the ground. Trees, bent double under as much as two tonnes of ice, snapped with a sound like cannon fire. Many of the Arboretum’s rare specimen trees were destroyed. Behind the Nepean Sports Centre, the recreational pathways used in winter for cross-country skiing were blocked with downed trees and branches. Often only splintered trucks were left standing, reminiscent of images of World War I.

Falling branches and the weight of the ice brought down tens of thousands of kilometres of power lines and thousands utility poles. High-tension transmission pylons that fed power to Ottawa, Montreal and other major cities were felled, leaving more than 4 million hydro customers without electricity for days, some for weeks. At night, the sound and flashes of transformers shorting out provided an eerie accompaniment to the tinkling of freezing rain and the crash of falling branches.

Regional Chair Bob Chiarelli declared a state of emergency throughout the region. Rural communities, such as Rideau, Osgoode, and Goulbourn, were particularly hard hit. There, the lack of electricity meant water pumps could not operate. Barns collapsed and livestock perished. Across the Ottawa River, emergencies were declared throughout west Quebec. Thousands of government workers were told to stay home. Universities and colleges closed. In an unprecedented move, Bayshore, St. Laurent and the Place D’Orléans shopping centres were also closed and transformed into emergency shelters.

The army was called out to assist emergency workers to clear debris and to deliver supplies to shelters. Called Operation Recuperation, 2,000 soldiers from Petawawa and Borden helped in the Ottawa area, with their headquarters set up in the Cartier St Drill Hall. Many thousands more helped through the rest of Ontario and Quebec. In total, more than 15,000 troops were mobilized.

By 14 January, the city, and the region more generally, was getting back to normal. Power had been restored to most urban areas through the truly heroic efforts of hydro linesmen, many brought in from neighbouring provinces and U.S. states. Rural communities continued to suffer, however; some unfortunate residents remained without power for more than a month through the worst of a Canadian winter. It is believed that 28 deaths were caused directly by the storm, most from hypothermia. Roughly 600,000 people had to leave their homes. More than 30,000 utility poles and 130 major transmission towers collapsed. Millions of trees were destroyed, with an estimated 100,000 downed in the Ottawa area alone. The damage done to maple trees severely affected maple syrup production for years to come. The storm was Canada’s largest natural disaster with estimated losses of roughly $5 ½ billion.