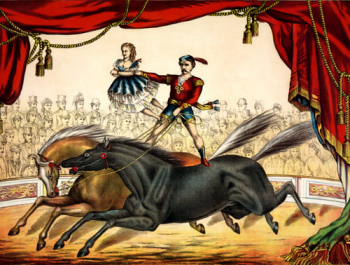 Life was hard in Bytown during the mid-nineteenth century. The small community, which was to become Ottawa, had perhaps 7,000 souls. People laboured long hours, six days of the week, for low pay. For tired workers after-work entertainment options were limited. Many simply repaired to their neighbourhood watering hole. For the well-to-do, Hough’s Dramatic Company, a troupe of five ladies and ten gentlemen, put on dramatic productions—tragedies, dramas and farces—at the Union Hall. A seat at their performances cost 1s. 3d., the equivalent of 25 cents. Those looking to improve themselves could join the Mechanics Institute and Athenaeum or l’Institut canadien français d’Ottawa. Both organizations, which were established in the early 1850s, put on edifying lectures and organized reading rooms and small libraries for their subscribers. For the sportsman, pigeon shooting on Major’s Hill was another popular activity during the annual spring and fall migrations—at least it was until most of the trees were cut down sometime before 1860 destroying the birds’ roosting sites.

Given this limited range of entertainment possibilities, imagine the excitement when a circus came to town. For most people, it was their only exposure to the outside world, enabling them to see exotic animals, mysterious peoples, and astonishing acts that they could otherwise only dream about. 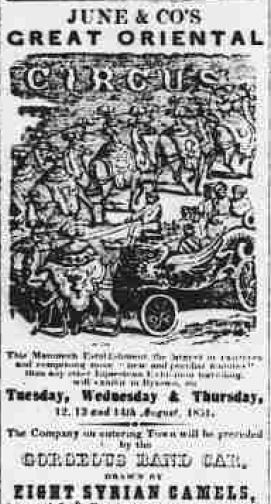 Advertisement for the June & Company’s Great Oriental Circus, The Ottawa Citizen, 26 July 1851.The June & Company’s Great Oriental Circus operated by James M. June with his partner Seth Howes came to Canada in 1851 with stops in Montreal and Toronto before coming to Bytown for a three-day visit from the 12 to 14 August, 1851. This was at least the second visit by Seth Howes. In the summer of 1840 he had brought the Equestrian Exhibition of the National Circus of New York to little Bytown which what was then little more than a remote lumbering village.

As the railway had not yet linked Bytown to the outside world, the circus must have travelled to the town by road—an onerous journey given the quality of inter-city highways of that era. The entrance fee was 1s. 3d. There was no price reduction for children; early circuses did not cater to youngsters.

The June & Company circus entered Bytown with the band car in front drawn by its eight Syrian camels “imported at vast expense expressly for this Establishment.” The circus’s advertisement also promised “a greater variety of startling and attractive entertainments than ever before been given by any single Troupe, for the effectual production of which an ‘Unparalleled Array of Talent’ has been secured.” As you can see, circus bombast started early. Most of the circus performances were equestrian in nature. Featured artists included Laverter Lee, the “great English EQUILIBRIST and DOUBLE RIDER, and his Talented Children.” The very large Lee family, which had immigrated to the United States in the 1840s, was a notable show family that provided a number of fine equestrians. The family is also reputed to have invented the “perch act,” where one performer conducts a series of acrobatic tricks on top of a pole that is being balanced by another performer. William H. Cole and his wife Mary Anne also performed. William Cole was a famed contortionist and clown. His wife was a renowned equestrienne who was billed to have come from Astley’s Amphitheatre in England. Astley’s was a famed London circus performance venue during the nineteenth century. Mary Anne Cole was the star of a show called “EXERCISES OF THE MANEGE.” Other featured equestrians were Mrs Caroline Sherwood, Mr. Lipman, “the distinguished dramatic rider” and Mr Sherwood, “the rapid rider.” The acrobats Messrs MacFarland and Sweet also performed. MacFarland was renowned for having executed eighty-seven successive somersaults. To round out the show was the clown John Gossin. Gossin, who was coming to the end of his career when he performed with the June circus, was a witty raconteur as well as a rider and tumbler. In the course of each performance, which started at 2.30 pm and 7.30 pm each day, the camels were introduced in “a new and magnificent Oriental Pageant” called the Caravan of the Desert, “representing the means of travelling in in the East and an Encampment of Wandering Arabs.”

News of the circus’s arrival in Bytown prompted controversy as well as excitement. A week prior to its appearance, a small critical article appeared in The Ottawa Citizen. It read “He of the Gazette,” in noticing the June & Company’s advertisement in the newspaper, invited readers to “a lecture on the immorality of such exhibitions.”  While unnamed, “he of the Gazette” was William F. Powell, a prominent Bytown citizen who had been the editor of the Bytown Gazette. He was to become the Conservative Member of Parliament for Carleton Country in 1854. (Powell Avenue in the Glebe neighbourhood is named in his honour.)

Robert Bell, the reformist and liberal-minded editor of The Ottawa Citizen, mocked Powell. He opined that June & Co. was a “most respectable company,” and that he was “at a loss to appreciate justly the various performances, and the decent and becoming manner with which it was carried on.” He added “Really the Editor of the Gazette is impayable [priceless], when forgetting who he is, he robes himself in the garb of the casuist, and decides for the spiritual benefit of his townsmen, what sort of amusement they are to have, and what are those which might prove detrimental to their morals.” Given the warm reception given to the Circus by Bytown’s residents, Bell said Powell was “preaching in the desert.”  Bell described the performance of Mrs Cole as “lady-like,” and that she had managed her spirited horse in an elegant manner. He also thought Mrs Sherwood was a good equestrian performer. As well, he praised highly the performance of the circus men especially that of John Gossin who Bell described as “a spirited and merry Clown of the troupe who kept the audience in a constant fit of laughter.” In one of the Circus’s performances, Gossin’s jokes about Powell, elicited “a roar of laughter.” Bell hoped that that would teach Powell that his position in the community “is not such as to warrant his giving advices as to what is morally becoming to the ladies of Bytown.”

After June & Company, other circuses stopped regularly in Bytown and later Ottawa through the remainder of the nineteenth century and well into the twentieth. Once the city was accessible by rail, productions also became bigger and more elaborate owing to both supply and demand reasons. Rail service lifted the constraints on what travelling circuses could transport from town to town at reasonable cost. This allowed them to respond to competitive pressures for new and more bizarre acts from increasingly jaded audiences who had become bored with equestrians, tumblers and clowns, the mainstay of early circuses. Perhaps the greatest circuses of the late nineteenth century that came to Ottawa was the famous Barnum & Bailey Circus, billed as “The Greatest Show on Earth.”  So fantastic was the Barnum & Bailey Circus, it warrants its own story.