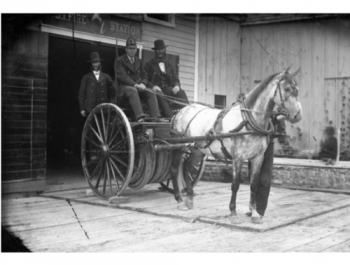 Hose Reel being drawn by horse outside of Ottawa’s No.1 Fire Station, undated. Topley Studio, Library and Archives Canada,PA-013103.

The crowds had started to gather at the train station hours ahead of the arrival of the St. Lawrence and Ottawa Railway train from Prescott, anxious to get a glimpse of their “boys.” On board was the Chaudière No. 1 Hose Reel team, the newly crowned “Champions of America” who were returning from an international meet held in the small town of Malone in upstate New York.

Arriving at 6.30 pm, the team was met by an official welcoming committee that included Fire Chief William Young, head of the Ottawa Fire Brigade. At that time, the Brigade consisted of eighteen professional fire fighters located in five stations, each equipped with a two-wheeled hose reels that could be pulled by one horse, or manually if necessary. Also present were Aldermen Lauzon, Coleman and Heney. Outside of the train station, a hook and ladder truck along with No. 1, 2 and 3 hose reels were drawn up in preparation for the parade through the streets of Ottawa. After the customary greetings, a procession formed up, starting with the team’s reel which was decorated with flags and bore a banner strung between two brooms with the word “Champion” written on it. The time being long past sunset, the parade was lit by torches. On their route to the City Hall on Elgin Street, the “boys” were cheered by crowds of Ottawa residents and supporters.

At City Hall, in the absence of the Mayor, Alderman Lauzon welcomed back the champion hose real team of America. He said that after the team’s earlier defeats at Canton and Potsdam, New York, the victory showed what perseverance can accomplish. The victory was being “hailed with pleasure throughout the Dominion.”  Alderman Coleman remarked that the win “added another to the long list of trophies won by Ottawa representatives.” Somewhat more tangibly, Alderman Heney promised that as soon as the City was in better financial shape, the fire brigade would get a pay raise.

Hose reel racing was a very popular activity during the late nineteenth century, with competitions organized among fire departments across North America.  Agricultural shows often hosted hose reel races, offering significant prize purses to attract the best teams. With serious money to be had, team members were often professionals selected for their speed or brawn to represent a particular fire hall rather than true fire fighters. Betting on these races was fierce.

In a typical hose reel race, a team of up to 18 men competed to draw a 450-pound reel cart carrying 350 feet of hose yards to a fire hydrant. They would then attach and lay 300 feet of hose, break the couplings and screw on a nozzle. Typically, a total of 400 yards would be run from start to finish. The races were timed. A good team could complete the course in a minute or less. Sometimes, two or more teams would race side by side. In early competitions, a team would push the hose reel cart along the track by hand. In later events, the men were tied to the carts, allowing them to put their entire bodies into the push, leaving their arms free. This was a dangerous sport. If a team member couldn’t keep up, he risked falling and being trampled by his team mates or run over by the hose reel cart. Serious injury could result. 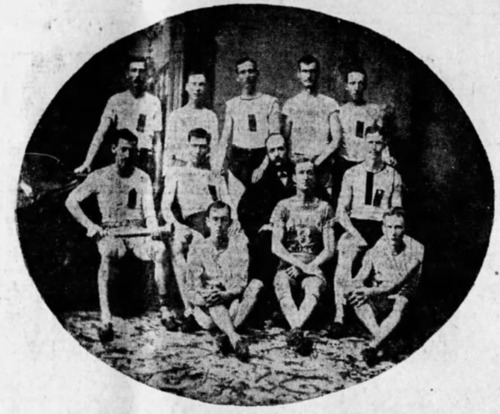 The Chaudière Hose Reel team was formed in LeBreton Flats in 1880. There were in fact at least two hose real teams in Ottawa at this time. At the Fourth Annual Fireman’s Picnic held in early August of that year, the Chaudière Hose Reel team faced the Union Company Hose Real Team which was captained by Cyrille Crappin, a legitimate fire fighter, who belonged to the “Queen Company” stationed at the Nicholas Street Station. At the Fireman’s picnic, organizers had expected that hose real teams from Prescott and Ogdensburg to compete in the same event. But at the last moment, both teams pulled out leaving only the two Ottawa teams in competition. The Chaudière team won the $75 first prize, with the Union team taking home the $30 second prize. Divided among the participants the prizes didn’t amount to much, though it was nice pocket money. This was about to change.

After that early August competition, Crappin joined the Chaudière team. Already a fast team with all its members noted runners—Peter Duffy reportedly ran the 100-yard dash in 9 4/5 seconds—the addition of Crappin took the Chaudières to a new level. He had competed in a number of professional foot races over the previous several years, invariably winning. Most famously, he had defeated a field of a dozen competitors from Montreal, Toronto and the Mohawk First Nation of Caughnawaga in a four-day racing event. Race participants ran continuously for four hours for four consecutive days. Whoever ran the furthest won the competition. The race took place in Powell’s Grove on Bank Street, opposite the Muchmor race track. The hotel located in the Grove sponsored the race. Crappin emerged the victor, having run 119 miles.

With the extra speed and endurance brought by Crappin, the Chaudière Hose Reel team was ready to take on all challengers. Chief Young of the Ottawa Fire Brigade said that he had “from $100 to $1,000 that says that Ottawa can produce a hose reel team…that can beat, and make better time than any hose reel team belonging to any part of the Dominion of Canada.” In September 1880, representatives of the St. Lawrence County Agricultural Society of Canton, New York, who had heard of the Chaudières’ prowess, came to Ottawa to invite the team to compete in Canton’s upcoming hose reel meet. The purse was US$250—a considerable sum of money in those days, equivalent to over US$6,000 today.  The Chaudières came in second at the Canton competition behind the Relief Company of Plattsburgh, New York. A few days later, at another meet in Potsdam, New York, the same thing occurred—the Chaudières fell short against the first-place Relief squad. According to hose reel race aficionados, while the team had the necessary speed to win, it lacked an expert coupler. This deficiency was filled by Johnnie Shea who became the new captain of the Chaudière Hose Reel team. Shea hailed from Burlington, Vermont where he had been the coupler for the renowned Barnes Hose Reel team. At Postdam, he asked if he could join the Chaudière team.

After their return to Ottawa with Shea, the Chaudière Hose Reel team practiced on Parliament Hill in front of a large crowd of onlookers and fans to prepare themselves for their next competition to be held in Malone, New York. This time, the purse totalled $450, of which $225 went to the winning team. The Ottawa team arrived two days ahead of the competition which was held on Friday, 1 October on the track of the Franklin County Agricultural Society. They had to borrow all their equipment—the reel from the Blake Hose Company of Swanton, NY, couplings from Chief Engineer Drew of Burlington, Vermont, and the hose from the Blake Hose Company and the Frontier Hose Company of St. Albans, Vermont.

The Ottawa team was met at the Malone train station by the Chief Engineer of the Malone Fire Department and members of the Active Hose Company of Malone. Owing to their late arrival, all the restaurants in the town were closed. Fortunately, the foreman of the Active Hose Company supplied an excellent meal to the hungry Chaudière team who stayed at Hogle House hotel. Owing to rain the next day, the team practiced indoors in a rink. Prior to their arrival, betting had strongly favoured the Relief team. However, once it was known who was on the Chaudière team, the odds shifted heavily in favour of the Ottawa team.

At 10 am Friday morning, six hose reel teams formed up in order of their turn to race—Chaudière Company No.1 of Ottawa, Blake Hose Company of Swanton, NY, the Relief Company No. 2 of Plattsburgh, NY, Washington No. 1 of St. Albans, Vermont, Chamberlin No. 1 of Canton, NY, and the Frontier No.2 of St. Albans, Vermont. The Chaudières and Reliefs came in first tied at 59¼ seconds, necessitating a tie-breaking run. The Ottawa team offered to run the tie-off as a direct race against the Relief squad instead of against the clock. But the Plattsburgh team declined. Betting odds were 2 to 1 on the Ottawa team.

There was considerable excitement among the 8,000 spectators as they waited for the drop of the umpire’s flag. As the Chaudières raced to the finish line, disaster almost happened. A boy who had been running alongside the Ottawa team was apparently pushed “violently” by one of the Relief’s team members into the way of the Ottawa team nearly tripping one of the members. The Ottawa Citizen reported that “fortunately this despicable action did not accomplish what was evidently intended.” Instead,  at the finish line, “Shea caught the coupling as it came over the reel…and broke it in a twinkling, with a team member quickly screwing the pipe on “in a masterly and satisfactory manner.” Their time was a phenomenal 58 seconds, easily out classing the Relief Company team who ran next. To great cheers, the Ottawa team drew their reel through the streets of Malone to their hotel. It was reported that the team “carried brooms to show that they had swept the day and also a rake to show the had racked in the cash.”

After their victorious return to Ottawa. Mr. Topley of Topley Studios took the team’s picture in their “full running costume.” Topley had planned to take the picture outside on Parliament Hill, the site of the practice runs. However, inclement weather forced him to take the photograph inside.

The Chaudière Hose Reel team competed the following year in Malone, and won their second American championship, again against the Relief Company of Plattsburgh, NY, taking home the $225 first prize. As a follow-up, the team was slated to race side-by-side with the Wentworth Hose Reel Team of Malone for a $100 prize. Controversially, the Malone team refused to race unless the course was shortened from 400 yards to 300 yards, citing an implicit agreement. The judges ruled against Malone. With the Wentworth Hose Reel team still refusing to run, the $100 was awarded to the Chaudière team. Subsequently, the Franklin Gazette, the Malone newspaper, reported that the Wentworth team was disbanded for their unsporting behaviour.

The success of the Chaudière Hose Reel team may have gone to members’ heads. The Montreal Gazette reported that the team was not willing to compete in any tournament where first prize money was less than $500. By 1882, the Chaudière Hose Reel team appears to have disbanded. In August of that year, Cyrille Crappin, the running star who had helped to bring victory to the Chaudière team in 1880 and 1881, was once again part of the Union Hose Reel Team that was competing in a race for a prize of only $50. There was no mention of the great coupler, Johnnie Shea.