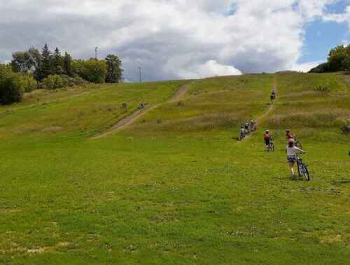 If Ottawa residents wish to go skiing on a typical winter weekend afternoon, they probably think about heading to the slopes of the beautiful Gatineau Hills in Quebec, the home of Camp Fortune, Edelweiss and Vorlage ski resorts in the Chelsea-Wakefield area, less than thirty minutes from Parliament Hill. Some might venture a bit further to Monte Ste Marie, or even Mont-Tremblant, the latter located 140 kilometres from the capital in the Laurentians. On the Ontario side, Mount Pakenham, found to the south-west of Ottawa near the village of Pakenham, provides good family fun. Calabogie Peaks, located “in the heart of the Ottawa Valley” slightly more than an hour’s drive from the city, offers slopes for all levels of expertise. Until 1990, there was another possibility, Carlington Hill, located but a hop, skip and a jump from downtown Ottawa, just south of the Queensway.  The hill was accessed from Kirkwood Avenue.

A ski resort at this site was the dream of Ottawa developer, John Clifford, the president of City Ski Centres Ltd, who brought the project to Ottawa City Council during the early 1960s, during the tenure of Mayor Charlotte Whitton. But it took almost five years for his dream to become reality. A significant part of the delay was due to Mayor Whitton’s appropriate mistrust of any city deals with developers that did not involve competitive tenders. As it turned out, Clifford’s company was the sole bidder on the contract when it went to public tender.

The site for the ski resort, Carlington Hill, was the location of a former dump. Reportedly, some fifteen feet of garbage had been deposited at is base where fetid water, draining from the hill in springtime, laid stagnant. While the home for frogs and other wild creatures, the area was also known for its noisome odours. On one occasion, a fire sent foul-smelling fumes into the surrounding neighbourhood.

Building the ski hill was a joint venture between the Ottawa’s Recreation Department and Clifford’s company. The Recreation Department of the City of Ottawa paid roughly $50,000 for extensive grading and filling of the site, a small ski lodge at the bottom of the hill, and the planting of trees and other landscaping. Clifford’s company invested another $50,000 for state-of-the-art Larchmont snowmaking equipment, a special Bombardier machine to groom the hill, a high-capacity T-bar lift able to carry 1,400 skiers up the hill every hour, as well as mercury-vapour lighting to permit night-time skiing. Clifford was granted the concession for the ski facility for ten years, with the City receiving five per cent of gross revenue.

Once completed the hill was 500 feet wide, with a vertical drop of 100 feet with a run of 600 feet. The lodge at the bottom of the hill was equipped with a canteen, a ski rental, an equipment room and a first aid room. Clifford boasted that it was “the biggest little ski area in the East.” He hoped that the hill would appeal to mothers with families who found it too difficult to take their children to Camp Fortune. By being right in the heart of Ottawa close to bus lines and with ample free parking, skiing was in reach of everybody. Clifford also opined that the hill would attract a lot of “housewives’ classes.” (This was not an enlightened age!)

At the beginning of December 1965, with temperatures dropping below the freezing point, crews at Carlington Hill began to make snow and groom the hill in preparation for upcoming ski season. On Thursday, 9 December 1965, the ski hill welcomed Ottawa skiers for the first time. Over the following week, employees worked out the kinks in preparation for the hill’s official opening. The price for a half day (four-five hours) or an evening of skiing was $1.50. The hill was open weekdays from 9:00 am to 10:00 pm, closed on Saturday mornings, and open from 1:00 pm to 6:00 pm on Sundays.

Mother Nature looked kindly on Carlington Hill for its official opening day. On the day before officials descended upon it, three inches of fresh snow fell, making perfect ski conditions. At 7:00 pm on Thursday, 16 December, Santa Claus snow-ploughed down the hill with a sack of candy for the hundreds of children waiting with their parents at the bottom. The grand old elf was accompanied by members of the Gatineau Ski Patrol who slowly descended the slope to the tune of Jingle Bells. At 7:30 pm, Mayor Reid cut the ribbon officially opening Ottawa’s newest and only in-town ski hill. Reid declared “Our dreams have come true.” Event organizers experienced a momentary panic just prior to the official launch when the T-bar lift failed owing to a loose bolt that fell into the machinery. Fortunately, embarrassment was avoided when the lift’s engineers quickly repaired it.

In addition to Mayor Reid, also in attendance that first official evening were other members of city council and George Gowling, the vice-president of the development company, who subbed for John Clifford who was out of town on a business trip. Following Reid’s ribbon-cutting speech, the Gatineau Ski Patrollers began a series of intricate, torchlit manoeuvres on the hill which led into five minutes of fireworks. More than 1,000 skiers then took advantage of the free skiing until closing.

Unfortunately, the Carlington ski hill was judged to have been a “colossal flop” during its first year of operation. Warm weather reduced the number of days of skiing and converted the car park, the site of the former dump, into a muddy mire. However, things improved in subsequent years. 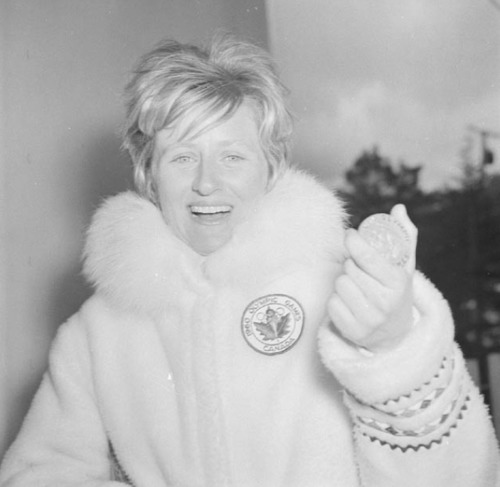 Anne Heggtviet with her gold Olympic Medal, 1960, Squaw Valley, California by E. Ferrat, National Film Board, Library and Archives Canada.In 1969, another ceremony was held when Carlington Hill was re-named the Anne Heggtviet Hill in honour of Ottawa’s ski hero. Anne Heggtviet, nicknamed “Ottawa’s first lady of snows,” was born in the capital and grew up in New Edinburgh. She was the first Canadian to win an Olympic gold medal in skiing, accomplishing this feat at the 1960 Olympic Games held at the now controversially named Squaw Valley, near Lake Tahoe in California. Heggtviet took first place in the slalom, handily beating Betsy Snite of the United States who took the silver medal, and Barbi Henneberger of the “unified” German team who won the bronze medal. (West and East Germany fielded a joint team under a neutral flag—the German tricolour superimposed with the Olympic rings.) In front of a large crowd of her Ottawa friends and family, Heggtviet skied down the hill and broke a ceremonial ribbon. The re-named hill was the second ski slope in the region to be named in her honour. The first one was at Camp Fortune. By now married, and going under the name Mrs Ross Hamilton, she remarked that “The youngsters of Ottawa are lucky to have facilities like this so close at hand.” 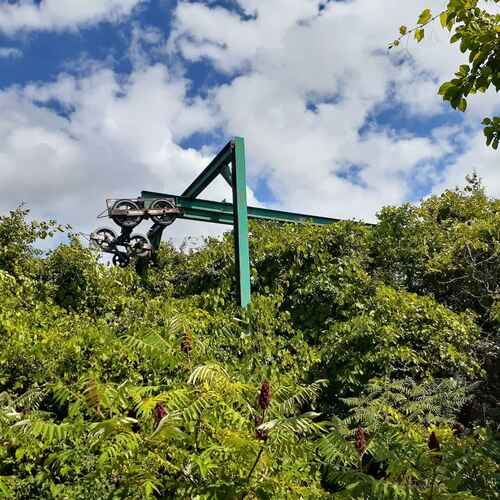 Rusting remains of the ski lift at the Anne Heggtveit Hill, August 2020, by James Powell.The Anne Heggtviet ski hill remained in operation for twenty-five years through to the end of the 1989-1990 ski season. But with declining attendance and aging equipment, the City’s Community Services and Operations Committee took the decision to close the facility. The biggest, little ski area in the East could no longer compete against more challenging, nearby ski resorts. The Anne Heggviet Hill with its 100-foot vertical drop and uninspiring run of only 600 feet was essentially a “bunny hill,” attractive to only the very young or the most novice skiers. Other ski resorts could offer something for all levels of experience. Camp Fortune in Quebec has twenty-five runs or trails, eight lifts, and a vertical drop of 590 feet. Calabogie Peaks boasts twenty-four runs, three lifts, a vertical drop of 780 feet, with a run of 6,961 feet long. The vertical drop of Mont-Tremblant, the greatest of all regional ski resorts, is 2,116 feet. Its longest run is four miles in length. 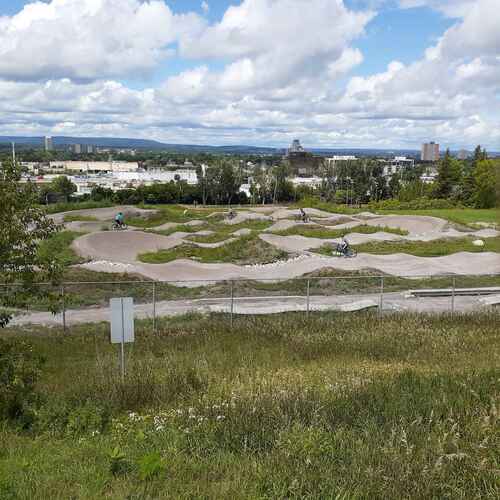 Bike Park at the top of Anne Heggtveit Hill, August 2020, by James Powell.Today, reminders of the Ann Heggtviet Hill’s skiing past can still be seen in the old tow equipment slowly rusting away. But the hill remains one of the city’s premier winter sports locations. Instead of downhill skiers, it draws hundreds of tobogganers on a winter day when snow conditions are just right. In 2020, a bicycle park opened at the top of the old ski hill despite neighbourhood opposition upset about the likely impact of the facility on wildlife and the area’s tranquility. Fortunately, the toboggan hill was not affected.