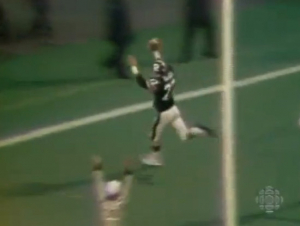 "The Catch" by Tony Gabriel

The afternoon of 28 November, 1976 was chilly and overcast in Toronto, with the temperature hovering about the freezing point. A stiff northwesterly breeze made it seem even colder. But the weather did not deter the more than 53,000 exuberant Canadian football fans that crowded into Exhibition Stadium that afternoon for the 64th Grey Cup Championship between the Saskatchewan Roughriders and the Ottawa Rough Riders. It was a record crowd and a record gate of $1,009,000. Both teams had finished the regular season in first position in their respective divisions. To reach the Grey Cup, Ottawa had bested the Hamilton Tiger-Cats in the eastern divisional final held the previous weekend in a close 17-15 contest, while Saskatchewan had topped the Edmonton Eskimos 23-13 in the west. The western Riders were five-point favourites owing to the strong arm of their veteran, all-star quarterback, Ron Lancaster, and the best defence in the Canadian Football League. Saskatchewan had also beaten Ottawa 29-16 in their only meeting of the regular season. Despite the youthful Ottawa team’s lacklustre play during the second half of the season, it was no pushover. Its coach, George Brancato, had been named the CFL’s coach of the year in 1975, and had put together back-to-back first place finishes for the eastern Riders.

Televised coast-to-coast by both CBC and CTV, this Grey Cup game promised to live up to its pre-game hoopla. But fans could not have known that they were about to be treated to one of the greatest, if not the greatest, championship game in CFL history. It featured the heroics of unlikely players, broke Grey Cup records, and, with the outcome in doubt into the last minute, ended in one of the most thrilling plays seen in Canadian football. Sports fans will always remember it as “The Catch.”

Ottawa was the first to draw blood. With slightly more than five minutes left to play in the opening quarter, Gerry Organ scored a field goal from Saskatchewan’s 30-yard line. With the western Riders retaking control of the ball, Ottawa’s defence held tough, forcing Saskatchewan to punt, setting the stage for Bill Hatanaka, the 22-year rookie kick returner out of York University. Catching the ball booted by Saskatchewan kicker Bob Macoritti, Hatanaka scampered 79 yards for a touchdown, the first punt return touchdown in Grey Cup history. It was also the longest Grey Cup punt return to that time, and only subsequently surpassed twice. It was 10-0 Ottawa at the end of the first quarter.

Late in the second quarter, Ottawa’s fortunes soured when Macoritti finally put the western Riders on the board with a 32-yard field goal. With the Ottawa offence under the direction of sophomore quarterback Tom Clements (“Captain Cool”) unable to sustain a scoring drive, this was quickly followed by a Saskatchewan major when Ron Lancaster found wide receiver Steve Mazurak who ran 15 yards for the touchdown. With Macoritti’s convert, the game was tied at 10. Seconds later, Ted Provost intercepted an errant pass from Tom Clements, intended for Ottawa’s star receiver, Tony Gabriel. This set the stage for another Lancaster touchdown throw, this time to tight end, Bob Richardson. Again Macoritti converted. The score was 17-10 in Saskatchewan’s favour at half time. Despite the score, everything had not gone in Saskatchewan’s way. Running back, Molly McGee, suffered a rib injury late in the quarter after a bruising tackle, crimping Lancaster’s running game.

In the third quarter, the two teams traded field goals. With a stiff wind favouring Saskatchewan, the Ottawa defensive team did great work in holding the western champions to only three points. Late in the quarter, Ottawa fans were brought to their feet by Jerry Organ, who faked a punt and ran 52 yards to bring his team deep into Saskatchewan territory. Organ’s gamble, caught Coach Brancato by surprise. After the game, Organ revealed that the play originated in a half-time dressing-room discussion with linebacker Mark Kosmos about Saskatchewan not rushing punts. Organ said that he “ran like a scared rabbit,” and had planned to kick the ball had he got into difficulty. Unfortunately, his heroics were snuffed out when Saskatchewan linebacker Cleveland Vann intercepted another one of Tom Clements’s passes. Seven points continued to separate the two teams as they entered the final quarter.

With only 7.33 minutes left of the final frame, Gerry Organ kicked a 32-yard field goal to bring Ottawa to within four points of their rivals. On the next series of plays, the Ottawa defensive squad stopped Saskatchewan midfield. With third down and less than a yard to go, the Saskatchewan’s coach, John Payne, decided to punt the ball instead of trying for the first down. It was an uncharacteristic conservative play. It was also a fateful decision with huge consequences.

Macoritti’s punt gave the Ottawa Rough Riders the ball on their 26-yard line with five minutes to go. Tom Clements then went to work, methodically working the sticks down field to bring Ottawa just outside the Saskatchewan 10-yard line. After a short pass to Art Green, Clements attempted to run the ball in himself but was tackled short of the first down, and tantalizingly close to the goal line. It was third down and less than a yard to go. With 1:32 remaining on the clock, and Ottawa needing at least four points, Coach Brancato decided to gamble. But the Saskatchewan’s defensive wall stopped the eastern Riders inches short of the first down. With the western Riders taking possession of the ball, it looked like Saskatchewan had the Grey Cup in the bag.

But they hadn’t counted on the Ottawa defence. Promising Coach Brancato one last chance, the defensive team gave up only six yards, forcing Saskatchewan to punt into the wind from their own 7-yard line. Ottawa’s Hatanaka, returned the ball to the western Riders’ 35-yard line. In two plays, Clements moved the ball down to the 24-yard line, with a pass to Tony Gabriel picking up the first down. With only 31 seconds remaining on the clock, everybody knew that Clements would try to find Gabriel again, his go-to-man the entire season…everybody, that is, except the Saskatchewan Roughriders who failed to double cover the scoring threat. Waving off a play from Coach Brancato, quarterback Tom Clements sought out Tony Gabriel who, first faking a post pattern, had turned instead to the outside. Clements found him in the clear, five yards behind Saskatchewan’s Ted Provost in the end zone. The Ottawa quarterback launched the ball. Gabriel reached above his head and pulled it in. Touchdown! Fans poured onto the field and mobbed Gabriel in the end zone. With Gerry Organ’s convert, the Ottawa Roughriders went ahead 23-20.

Although Saskatchewan had one more opportunity to score, with only 20 seconds left in the game, there was simply not enough time. Ottawa became the 1976 Grey Cup Champions. The perfectly executed 24-yard touchdown pass from Clements to Gabriel went down in CFL lore as simply “The Catch.” Clements was named the game’s most valuable offensive player, while Gabriel was named the most valuable Canadian. Saskatchewan’s Cleveland Vann was the game’s most valuable defensive player. Members of the winning team each received $6,000 bonus, with the losing team members each receiving $3,000. Tom Clements, as the top offensive player of the game, was also given a new car, a timely prize as is old one was the “team’s joke.”

Back home in Ottawa, the place went wild as fans poured onto the streets. Bank Street turned into a parking lot as fans celebrated their Rough Riders’ victory, honking horns and consuming vast quantities of beer as police turned a blind eye to minor infractions. At noon the next day, the team returned home, greeted at the airport by hundreds of fans and a brass band. A civic celebratory dinner was held for the team that night. The event totally eclipsed a black tie dinner hosted by Prime Minister Trudeau on Parliament Hill for Team Canada, winner of the 1976 Canada Cup Hockey Tournament the previous September.

The 1976 Grey Cup was the Ottawa Rough Riders’ ninth and last CFL Championship. Although the team again made it to the finals in 1981, they went down to defeat 26-23 to the Edmonton Eskimos. The Ottawa Rough Riders team collapsed in 1996 owing to falling attendance, poor management, and growing debts. Founded in 1876, the oldest professional sports team in North America was no more. In 2002, a new team, the Ottawa Renegades, briefly played out of Landsdowne Park, but it too folded after only four years. In 2014, another Ottawa team, the Redblacks, wearing the familiar colours of their storied predecessors, took the field.

UPDATE (27 November 2016): Ottawa Redblacks win the Grey Cup! In an exciting contest in Toronto, the underdog Ottawa Redblacks held off a fourth-quarter surge by the Calgary Stampeders to take the Cup 39-33.