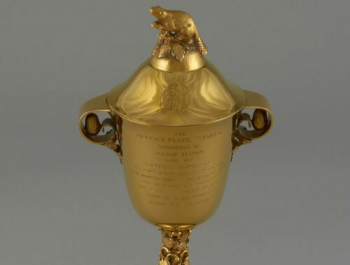 The most famous and prestigious thoroughbred horse race in Canada is the Queen’s Plate, open to Canadian-bred, three-year-old horses. It’s also the oldest continuously-run horse race in North America, dating back to 1860, seven years before first running of the Belmont Stakes, the oldest of the “Triple Crown” races in the United States. Over its illustrious history, many members of the Royal family have attended this storied event from Princess Louise in 1881, to the Queen Mother in 1965, and to Queen Elizabeth in 1959, 1973, 1997 and, most recently, 2010. Horse racing is indeed the “sport of kings!”

Advertisement for the 1872 running of the Queen’s Plate, Ottawa Daily Citizen.

The story of the Queen’s Plate begins in 1859 when Sir Casimir Gzowski, the president of the Toronto Turf Club, petitioned the Governor General for an annual horse racing prize to be awarded by Queen Victoria to horses bred and reared in Upper Canada (Ontario). He correctly believed that the cachet of winning a royal prize would encourage the development of horse breeding in Canada. Queen Victoria graciously agreed to the request providing an annual prize of 50 guineas for a race to be called the Queen’s Plate. (A guinea is defunct British gold coin no longer minted by the mid nineteenth century but widely used as a unit of account in horse racing, the art world, and certain professions well into the twentieth century. It had a value of 21 shillings sterling.)

The Royal Privy Purse continues to provide this annual prize though instead of 50 guineas, it reportedly sends a bank draft for the sterling equivalent except when a member of the Royal Family is present for the race. Then, the winner receives 50 gold sovereigns in a purple bag. The winner also receives 60 per cent of the race purse of $1 million. Confusingly, the “Plate” is a foot-high golden cup on a black base rather than a plate. (The traditional royal prize for a horse race had been a silver plate, hence the name. However, over time the nature of the prize changed but the name stuck.)

The first running of the Queen’s Plate took place at the end of June in 1860 at the Carleton Race Course in Toronto. It was open to all horses reared in Upper Canada which had never won public money. During the early years of the Queen’s Plate, horses competed in three heats rather than a single race as is the case today. The first winner was a five-year old horse by the name of Don Juan, owned by a Mr. White and ridden by Charles Littlefield. Don Juan came in second in the first heat, but won the second and third heats of the competition over a one-mile track with his best time of 1 minute 58 seconds.

Although the next several Queen’s Plates were held at the Carleton Race Course, it subsequently moved around the province depending on the lobbying powers of various racing clubs and politicians before it settled down for good at the Woodbine Race Course in Toronto in 1883. Until 1956, the race was held at the old Woodbine site at the end of Woodbine Street in Toronto close to Lake Ontario. It then moved to the current Woodbine location on Rexdale Boulevard, north of the Pearson Airport in Etobicoke.  During the Queen’s Plate’s journey around Ontario, the race came to Ottawa on two occasions, the first in 1872 and the second in 1880.

The organization that brought the Queen’s Plate to Ottawa in 1872 was the Ottawa Turf Club, founded in 1869 with the patronage of Sir John Young, later known as Lord Lisgar, the Governor General, who was an avid horseman. The President of the Club was Joseph Aumond, Vice-President was Nicholas Sparks, and  Edward Barber was the Secretary.  While the lobbying of Sir John A. Macdonald, the Premier, may have helped the new Ottawa Turf Club win the event, Lord Lisgar was likely the one most responsible for bringing the race to Ottawa. With His Excellency as its patron, the Ottawa Turf Club definitely had the inside track for hosting the event. News that the Queen’s Plate had been conferred on Ottawa was officially relayed to the Ottawa Turf Club in February 1872, with the race planned for late spring. The conditions of the race were: “For horses, geldings or mares, bred, raised, trained and owned, in the Province of Ontario, who have not previously won public money at any race meeting. The whole stake to go to the winner.”

The Club organized a two-day racing extravaganza for Friday and Saturday, the 31th of May and the 1st of June, 1872. The event was held at the new Mutchmor Driving Park which had opened the previous year. The race track and the adjoining Turf Hotel were owned by Ralph Muchmor and Edward Barber, the Turf Club’s Secretary. Total prize money for the two-day event amounted to $2,850—a fair sum in those days.

Long before race time, pedestrians and carriages packed Bank Street, all heading for the race track located now where the Mutchmor Public School is today. Race conditions were perfect with the track having just been rolled after a recent rain. The main attraction of the day was, of course, the Queen’s Plate, the third race of the afternoon. By the time Lord and Lady Lisgar arrived at 3 pm, every vantage point was taken up, the stands filled to capacity with ladies and gentlemen, while less fortunate punters made do with fence tops, and the seats of cabs and wagons. According to the Ottawa Daily Citizen, it was difficult to estimate the size of the crowd, but the stands scarcely accommodated a quarter of the numbers. Many of the visitors came from other parts of Canada and even from the United States to witness the Queen’s Plate which was already the highlight of the Canadian racing calendar.

The first race of the day was the $300 Hurdles Race, a two-mile run with eight hurdles 3’ 6” high, which was won by Duffy by three lengths. The second race was the $100 Steward’s Race won by Mohawk who took both heats. Up next was the Queen’s Plate. The prize was 50 guineas ($256), the gift of “Her Most Gracious Majesty.” The winning horse may have received an additional purse but the report relating to this was obscurely written. It read: “T.C.W. Entrance, $10 p.p. to go with the plate.”[1] The Ottawa Turf Club provided $100 to the second-place horse.

Six horses were entered in the 1½ mile race (no heats): Blacksmith, a 4-year old, black horse, with its jockey wearing a black jacket and blue cap; Fearnaught, a bay horse with its jockey in scarlet with a dove colour cap; Alzora, a chestnut mare, whose jockey wore brown and white; Jack Vandall, a bay gelding, its jockey in blue and white; Bay Boston, a 5-year old, bay horse, (colours not identified), and Halton, a 5-year old bay horse whose jockey wore scarlet. Halton was the favourite. Three of the horses in the running, Fearnaught, Alzora and Jack Vandall, had the same sire, Jack the Barber, a celebrated thoroughbred horse originally from Kentucky. 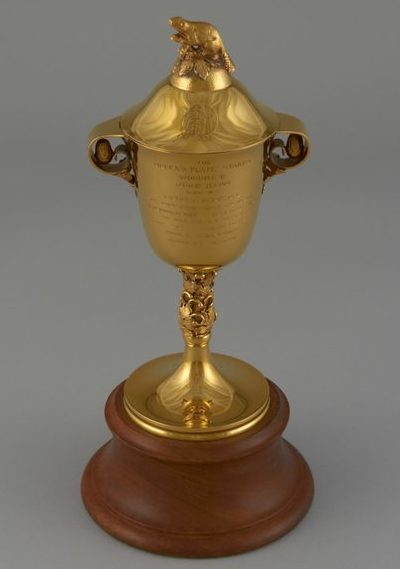 The Trophy awarded for winning the Queen’s Plate. Canadian Museum of History.

At post time, there were four false starts. But after they were finally off, it was deemed a “splendid race.” After the first half mile, it became apparent that the race belonged to Fearnaught, with the favourite, Halton, fading. In a time of 2 minutes 54 ½ seconds, Fearnaugh, ridden by Richard Leary and owned by Alexander Simpson, won the 13th running of the Queen’s Plate. Jack Vandall came in second and Halton third. Richard Leary, the winning jockey who was also a resident of Ottawa and the horse’s trainer, was presented with a gold-mounted riding whip by Mr. William Young of the firm Young & Radford, a watchmaker and jewellery manufacturer located at 30 Sparks Street.

Two more races followed the Queen’s Plate to round out the racing for the afternoon. These were the $300 Tally Ho! Stakes and the $150 Memorial Plate.

Betting had been fierce in the lead-up to all the races. But all the favourites came up short that day causing “a monetary twinge among the sporting fraternity,” according to the Ottawa Citizen.

Pelting rain almost caused the postponement of the second day of racing from the Saturday to the following Monday. Racing on a Sunday, the Sabbath, was forbidden. However, as many of the horses were slatted to race in Montreal the following week, the decision was made to go ahead on the principle “run, rain or shine.” Fortunately, at race time the clouds cleared, though attendance suffered. Four more races were held: the $600 Carleton Plate; the $400 Lumbermen’s Purse; the $300 Merchants’ Plate; and, finally, the $150 Consolation Stakes. There was a bit of excitement surrounding the running of the Lumbermen’s Purse. Owing to “a misunderstanding or improper interference,” the race had to be run twice. People almost came to blows before the Club Secretary announced that all pools and bets were off for the race.

The Ottawa Turf Club, the host of the 1872 Queen’s Plate, disappeared from the Ottawa racing news in the decade following its big race weekend but not before becoming mired in controversy. At the end of a racing fixture held in October 1874, the Club held a “deer hunt” as a grande finale to the day’s events. A half-starved deer was released onto the field. It was barely able to run having been cooped up in a small cage, its joints stiffened from lack of use. Instead of taking off into the nearby bush to be hunted by a pack of dogs followed by riders, it stumbled into the crowd. It only took ten seconds for it to be taken down and torn to pieces by the hunting dogs amidst the spectators’ carriages. The Ottawa Daily Citizen thought that this was a case for the S.P.C.A. and “hoped that the people of Ottawa will never be asked to patronize such a “sport” again.”

The Ottawa Racing Association hosted the 21st running of the Queen’s Plate at the end of June 1880. It was the second race of the first day of racing entertainment again held at the Mutchmor track. Five horses were at the post come race time; a sixth, the mare Footstep, had been pulled on a challenge on the grounds of ineligibility since it had not been trained in Ontario. The winner was Bonnie Bird, owned by John Forbes and ridden by Richard Leary, the same jockey who rode to victory in the 1872 Queen’s Plate. Bonnie Bird also ran he following day in the first Dominion Day Derby carrying five pounds extra owing to having been the Queen’s Plate winner. Owing to a very bad send off, Bonnie Bird was virtually out of the race at the start but Richard Leary, the jockey, somehow manage to close the gap with the leaders on the turn but was unable to catch Lord Dufferin who won by a length.

Today, Ottawa horse-racing fans can enjoy standard-bred harness racing at the Rideau Carleton Raceway on the Albion Road. But if you want to dress up, wear a fascinator, and otherwise enjoy the excitement of the annual running of the Queen’s Plate, you will need to head to the Woodbine Race Track in Toronto.

[1]This cryptic phrase likely means that the Queen’s Plate was an entry in the Triple Crown Winner series and that the $10 per entry free was included in the prize.