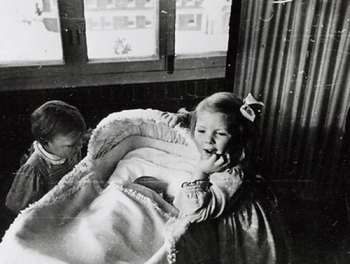 If there ever was a time for an emotional pick-me-up, you couldn’t have found a better moment than mid-January 1943. It was brutally cold, and Canada was in its fourth year of war with the Axis Powers with no end in sight. Hundreds of thousands of Canada’s young men and women had left their homes, families and jobs to serve in the armed forces, or in the merchant marine bringing much needed food and other supplies to embattled Britain. Coupon rationing for gasoline and tires had been introduced the previous spring and had been extended through 1942 to cover many food staples, including sugar, tea, coffee and butter. And it was only to get worse. On 19 January 1943, Ottawa’s Evening Citizen reported that meat rationing was about to be introduced. “Bacon, ham and even pork sausage [was] unable to be had for love or money in many places.” The butter ration was also about to be reduced by a third to 5 1/3 ounces per week per person. But there was one piece of news that bleak mid-winter that raised spirits and boosted the morale of a war-weary population. At 7pm on that snowy January day, a princess was born at Ottawa’s Civic Hospital, the third daughter of Princess Juliana of the Netherlands.

Three years earlier in May 1940, the Dutch Royal Family had fled to Britain from the Netherlands, one step ahead of the invading German army. While Queen Wilhelmina and the Dutch Government established a government-in-exile in London, her daughter, Crown Princess Juliana, and her two young daughters, Princess Beatrix, aged 2 ½ years and Princess Irene, 9 months, were evacuated to Canada. Her German-born husband, Prince Bernhard, now a Dutch subject, was stationed in London becoming an active RAF spitfire pilot.

Princess Juliana and her two daughters arrived in Halifax on 11 June 1940 on a Dutch cruiser. She had been offered asylum by Canada’s new governor general, the Earl of Athlone. His wife, Princess Alice, was an aunt of Princess Juliana. After staying temporarily at Rideau Hall, the Governor General’s residence, the young family settled in Ottawa at 120 Landsdowne Road in Rockcliffe Park. They dubbed their home “Nooit Gedacht,” meaning “Never Imagined.” Princess Juliana later leased Stornaway at 541 Acacia Drive, now the official residence of the Leader of the Opposition.

In September 1942, Prince Bernard announced over Radio Orange that Princess Juliana was pregnant with their baby due sometime in late January the following year. In anticipation of the royal birth, the Canadian Government declared in December the hospital room in the Civic Hospital where the birth was to occur “extraterritorial” to ensure that the child would not be born a Canadian citizen and British subject; an important consideration should the child be a boy and hence heir to the Dutch throne.

Suffering from mumps and with the birth due anytime, Princess Juliana was admitted to hospital by her physician, Dr. Puddicombe, on Monday, 18 January 1943. Princess Margriet Francisca, the first and only North American-born princess, was born the following day. She was named after the marguerite, a daisy-like flower and symbol of Dutch resistance. Prince Bernhard who flew to Ottawa for the birth reported the glad tidings by telephone via Montreal and New York to Queen Wilhelmina in London. The news was then sent to reporters waiting at the Château Laurier Hotel, and broadcasted around the world.

At 7.45pm, the Civic Hospital released its first press statement saying that both mother and daughter were doing well, with the new princess weighing in at seven pounds, five ounces. The next day, the Peace Tower carillon on Parliament Hill played the Dutch National Anthem and other Dutch songs, while the Dutch tricolour flew overhead; the first time a foreign flag had flown from the Tower. In keeping with Dutch tradition, the baby’s birth was celebrated by eating beschuit met muisjes—a rusk topped with sugar and anise seed sprinkles. Typically coloured white and pink, the sprinkles were coloured orange in honour of the Dutch Royal House of Orange-Nassau. The rusks were wrapped in orange paper and tied with a red, white and blue ribbon. A journalist described one as “hard as a chunk of the city’s ice encrusted pavement” but “with rationing what it is” it tasted “pretty good.”

News of the princess’s birth, was a major morale boost for oppressed Dutch citizens living in occupied Netherlands. The underground Dutch newspaper De Oranjerkrant wrote: “Little Margriet, you will be our princess of peace. We long to have you in our midst…Come soon Margriet. We are awaiting you with open arms.”

Princess Margriet was christened in St Andrew’s Presbyterian Church on Wellington St on 29 June 1943 at 1:00pm. It was a bright, sunny afternoon. Among the dignitaries in attendance for the occasion were her father, Prince Bernhard, her grandmother, Queen Wilhelmina who was making her second trip to Ottawa, the Governor General and his wife, and Prime Minister Mackenzie King. The packed service was conducted in Dutch by Rev. Dr Winfield Burggraaff, a Dutch naval chaplain and a minister of the Reformed Church on Staten Island, NY. Also presiding were Rev. A. Ian Burnett, minister of St. Andrew’s and Rev. Robert Good, former moderator of St. Andrew’s. Godparents for the little princess included U.S. President Franklin Roosevelt, Queen Mary, the widow of King George V, the Governor General, and the entire Dutch merchant marine who were represented at the church by seven of its members. Marine Roell, who had accompanied Princess Juliana into exile in Canada, was also made a godmother, though she was identified only as a widow of a Dutch martyr who gave his life for his country in order to protect her family still in Holland from reprisals. The christening service was broadcasted by short-wave radio live to London via New York and was rebroadcasted to the occupied Netherlands. Prince Bernhard advised his countrymen not to celebrate too openly for fear of German retaliation. Following the ceremony, hundreds of Ottawa citizens welcomed the little princess with loud applause as the Royal Family emerged from the church.

The Dutch Royal Family stayed in Ottawa for the remainder of the war, returning to the Netherlands in early May 1945 after its liberation for the most part by Canadian troops. Before leaving, Princess Juliana gave an oak lectern to St Andrew’s Church carved with the royal coat of arms, marguerites, and the four evangelists. The birth of Princess Margriet helped cement a lasting bond between the peoples of Canada and the Netherlands. Princess Juliana is reported to have said “My baby will always be a link with Canada not only for my own family but for the Netherlands.” As way of thanks for her family’s treatment in Canada, Princess Juliana sent 100,000 tulips to Ottawa in the fall of 1945. It was the start of a beautiful friendship that has lasted to the present day.

Retired from the Bank of Canada, James is the author or co-author of three books dealing with some aspect of Canadian history. These comprise: A History of the Canadian Dollar, 2005, Bank of Canada, The Bank of Canada of James Elliott Coyne: Challenges, Confrontation and Change,” 2009, Queen’s University Press, and with Jill Moxley, Faking It! A History of Counterfeiting in Canada, 2013, General Store Publishing House, Renfrew, Ontario. James is a Director of The Historical Society of Ottawa.
Published in Personalities: Very Famous to the Lesser Known
back to top