An Assassination in Ottawa 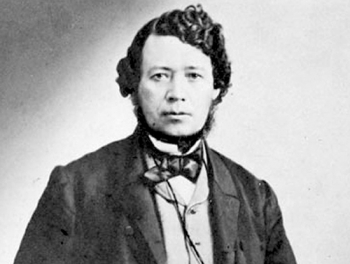 Back in April, 1868 the only murder of a federal MP happened right here on Sparks Street! It was, in fact , the murder of a “Father of Confederation “as the individual had played an active part in the Constitutional conference at Charlottetown P.E.I in 1864 that brought us the British North America Act of 1867. Charlottetown was the original conference concerned with the foundation of Canada as a nation. The murdered man's name was Thomas D'Arcy McGee, of Irish extraction. The man who was convicted of murdering him, Patrick Whelan, the last individual subject to a public hanging in Canada was also an Irishman and a member of the Fenian Brotherhood.

The Fenian brotherhood was dedicated to freeing Ireland from British rule and were the last official invaders of Canada in 1866 and 1870. The presence of the Fenians, who were largely US Civil War veterans, probably added extra pressure to the idea of forming the Canadian nation. Their aim was to conquer Canada and then trade it back to Britain for Irish freedom. McGee had begun his political career as a strong proponent of Irish freedom, but became a stronger proponent of Canadian Confederation and argued against Fenian ambitions, which may have convinced the Fenians that he was a traitor to their cause. In any event, McGee was shot with a bullet to the back of the head outside his lodgings at 142 Sparks Street on April 7, 1868. He was retuning late from the House of Commons and there was no witness to his shooting.

McGee was born in Ireland in 1825 and first came to Canada in 1857 after a career as a journalist and political activist both in Ireland and the United States. He argued vigorously for Irish freedom, but was opposed to the measures expressed by the Fenian brotherhood He rose in Canadian politics and, at the time of the Charlottetown Conference was Minister of Agriculture in John A. Macdonald's government. He was a fiery orator in th e days when oratory was an art form. There are several pictures of McGee on pages 372 and 376 in Charlotte Gray's excellent book The Museum called Canada. There is also a pamphlet available from the Bytown Museum that fully discusses McGee's career.

Needless to say, McGee's death caused an uproar in local circles. Extreme pressure was exerted on the local police authorities to find arrest and punish the perpetrator. Suspicion fell on a local Fenian, Patrick Whelan and Gray's book has examples of the wanted posters offering substantial rewards for Whelan's capture, even though there was little evidence available to connect him to the crime. He was eventually captured and incarcerated in the Ottawa gaol. The story of Whelan's trial, conviction and execution is a story in itself and will appear here in the not too distant future.

McGee's funeral in Montreal was a large one with literally thousands of people lining the streets. Special testimonial dinners were held in Ottawa and Montreal, speeches were made and the threat of the Fenians was underscored. In those days, it was usual to make a plaster cast of a famous dead person's face so that people would remember what the deceased looked like. This was especiallytrue if no painting existed. While photography was rapidly developing, it was not yet to the level of popularity it would later enjoy. One problem existed—McGee had been shot in the back of the head and there probably was extreme facial damage. Therefore, to commemorate McGee's oratorical skillsa plaster cast was made of his hand with which he used to gesticulate while making his speeches! A picture of this cast appears in Gray's book also but you only have to visit the Bytown Museum to see the real thing. The Museum has a section devoted to the memory of McGee and the death cast is there together with other mementos. For a while, the Museum also exhibited the gun that was used to shoot McGee. This gun belonged to a descendant of the Judge that tried Whelan, but was recently acquired by a National Museum which loaned it to the Bytown for an exhibit.

The next time you are walking down the Sparks Street mall, between Metcalfe and O'Connor look for the plaque that marks the spot where McGee was shot.

Who says. Ottawa doesn't have stories to tell?

Since 1992, he has been active in the volunteer sector and has held executive positions with The Historical Society of Ottawa, the Friends of

the Farm and the Council of Heritage Organizations in Ottawa. He also inaugurated the Historica Heritage Fair in Ottawa and still serves on its organizing committee.