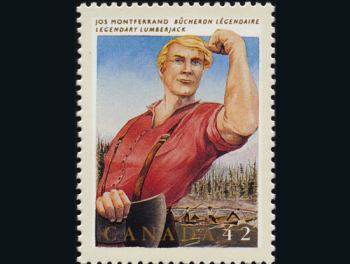 A lot of people think Joe was a legend. There are even some who say he was the model for Paul Bunyan, the legendary North Woods logger. In his book, “The Lumberjacks”, Donald MacKay has the following word about it, quoting Charlie MacCormick of Port Menier, Anticosti. "My God, my grandfather worked with him! He and my grandfather, Michael MacCormick rafted wood on the Ottawa River. Together! Sure!" So, the song sung by Stompin' Tom Connors tells a real story, even allowing for a little poetic license.

...he was fair haired and blue eyed and very popular with the ladies.

Joseph Montferrand was born in 1802 and grew up with the square timber trade. He died in October of 1864 and is buried in Notre Dame des Neiges cemetery in Montreal. He was a big man for his time, standing 6'2” and was famous for his boxing prowess before he left Montreal to take part in the timber trade in the Ottawa Valley as well as parts of Quebec. His origins were in the north east of France and he was fair haired and blue eyed and very popular with the ladies. One of his favourite tricks was to do a back flip and put the imprint of his logging boots on an eight foot ceiling. The story is that he got his athletic ability and balance from his grandfather who had been a fencing master.. Joe is famous locally for two memorable fights on the bridge that spanned the Ottawa between Bytown and Hull. In one case he is said to have held off a crowd of 150 “Shiners” or Irish labourers who had worked on building the Rideau Canal and were competing with the French Canadian “bucherons” for work in the timber industry. There are actually three famous stories of his ”doings” in Ottawa about the same time Colonel John By was getting the Rideau Canal built.

One night while drinking...
Joe explained the situation to a new, pretty barmaid and explained they had no money.

One night, Joe and his confreres were out drinking, probably in what is now Lower Town or in the Byward Market. There were certainly enough pubs to go around. They went to the pub of an old acquaintance only to find ownership had changed hands. Joe explained the situation to a new, pretty barmaid and explained they had no money. She said they could stay and be served because they looked like men of honour. Montferrand thanked her; and from the centre of the tavern did his famous back flip and kicked his boot marks into the ceiling to show that he had been there! It is said visitors came from miles away to admire the work of Joe Montferrand and the pub prospered! Maybe the mark is still there if you visit the right pub.

Another story also involves a pretty girl! Joe was taken with a girl in Bytown and decided to court her. She was also of interest to a large Highlander named Macdonald, who had six large brothers. The seven MacDonalds decided to jump Big Joe and teach him a lesson. They cornered him on the Bytown side of the bridge to Hull. Joe grabbed a pole from the bridge and, swinging it like a , club damaged the seven brothers badly and drove them all off.

The competition between the Irish “shiners” and the French “bucherons” was fierce. Joe ws the leader of the French loggers and the shiners decided that if they eliminated him, there would be more work for them. According to Peter Mackay it was in 1829 that a gang of 150 ambushed Joe on the same bridge, armed with clubs Saying a little prayer for the odds were pretty bleak, Joe walked forward and picked up the largest Irishman by his feet. Swinging this gentleman like a club, Joe did terrible damage to the front rank of his enemies. The carnage was terrific and, avoiding the same treatment, the balance of the Shiners ran up the road.

Lots of stories
He was a character in early Bytown and the fact that he actually existed is not disputed.

These are only a few of the stories about the almost legendary logger. He was a character in early Bytown and the fact hat he actually existed is not disputed. There are stories of his life all over eastern Ontario and Quebec. Bytown, Kingston and Montreal are prominently featured. How many recognize names like Johnny Appleseed, Daniel Boone and Davy Crockett, who were real people as well. Our friends to the south seem to do a much better job of remembering their heroes. Joseph Montferrand married at the age of sixty and had one son. He died quietly at home in Montreal (212 Rue Sanguine) on October 4, 1864.

Questions:
(1) What was the family name of the brothers Joe defeated on the bridge?
(2) What was Big Joe's trademark?
(3) Could Colonel By and Joe have met?

Since 1992, he has been active in the volunteer sector and has held executive positions with The Historical Society of Ottawa, the Friends of the Farm and the Council of Heritage Organizations in Ottawa. He also inaugurated the Historica Heritage Fair in Ottawa and still serves on its organizing committee.
Published in Personalities: Very Famous to the Lesser Known
back to top