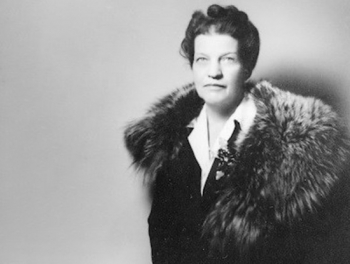 At roughly 3.30 pm on Thursday, 20 February 1930, two newly-appointed senators to Canada’s Upper House of Parliament were introduced and took their seats. They were the Hon. Robert Forke of Pipestone, Manitoba, and the Hon. Cairine Mackay Wilson of Ottawa, Ontario. In and of itself, this event was not unusual, senators are routinely appointed by the Governor General on the advice of the Prime Minister when vacancies result from retirement or death. What made this occurrence special was that it was the first time a woman had taken a seat in Canada’s Senate. Only four months earlier, the Judicial Committee of the Privy Council in London had ruled that women were indeed “eligible persons” to sit in Canada’s Upper House, overturning an early judgement to the contrary by Canada’s Supreme Court.

The elevation of Cairine Wilson to the Senate, announced a few days earlier on 15 February 1930, did not come as a great surprise. Her name had been mooted as a likely candidate almost immediately after the Privy Council had made its ruling. On her appointment, Prime Minister Mackenzie King said that “the government [had availed] itself of the first opportunity to meet the new conditions created by the finding of the Privy Council as to the eligibility of women for the Senate.” However, her appointment was almost stillborn as her husband was apparently opposed to her taking paid employment, and had informed the Governor General that she would decline the nomination. She quickly set the record straight and accepted the Prime Minister’s nomination over her husband’s objections.

Press reports of her appointment were positive, though they focused more on her personal attributes and family connections rather than her qualifications. Wilson was described as a tall women, still in her 40s, with a “dignified bearing.” She was “highly educated, tactful, and had unaffected manners,” with “dark hair and bright blue eyes.” The bilingual mother of eight lived at 192 Daly Avenue in Ottawa, though she and her husband were in the process of renovating and moving to the old Keefer manor house in Rockcliffe. The family also owned a summer residence in St Andrews in New Brunswick. Newspapers speculated on how she would be addressed when she entered the Senate, and on what she would wear. One newspaper article thought that she would bring to the Senate, “the feminine and hostess touch.”

Born in 1885, Wilson came from a wealthy and socially prominent Montreal family that had strong ties to the Liberal Party of Canada. Her father, Robert Mackay, a director of many leading Canadian firms including the Bank of Montreal and the Canadian Pacific Railway, had been appointed to the Senate in 1901 by his good friend Sir Wilfrid Laurier, a position he held until his death in 1916. Cairine Wilson’s husband, Norman Wilson, had been a Liberal member of parliament for Russell County in Eastern Ontario prior to their marriage in 1909. She herself was a Liberal Party activist, having chaired the first meeting of the Ottawa Women’s Liberal Club in 1922, and was Club president for the following three years. In 1928, she was a key organizer of the National Federal of Liberal Women of Canada.

Perhaps surprisingly, given her political credentials, Cairine Wilson had not been active in the suffrage movement, nor had she been involved in the legal suit, known as the “Persons Case,” that challenged the exclusion of women from the Senate. However, in her first Senate speech, given in French to honour her natal province, she saluted the “valiant work” of the five women, Emily Murphy, Henrietta Edwards, Nellie McClung, Louise McKinney and Irene Parlby, commonly referred to as the “Famous Five,” who made her appointment possible. She also expressed “profound gratitude to the Government for having facilitated the admission of women to the Senate by referring to the courts the question of the right to membership.” She added that she had not sought the “great honour of representing Canadian women in the Upper House,” but desired to eliminate any misapprehension that “a woman cannot engage in public affairs without deserting the home and neglecting the duties that Motherhood imposes.”

The “Persons Case,” launched by the “Famous Five” in 1927, was a landmark decision in Canadian jurisprudence that not only opened the door for women to participate more fully in public life, but also determined how Canada’s Constitution, the British North America Act, now called the Constitution Act 1867, should be interpreted. Although women were given the vote in federal elections in 1920, with Agnes McPhail of the Progressive Party of Canada elected in the 1921 General Election in the Ontario riding of Grey Southwest, women were still barred from sitting in the Senate on the grounds that the BNA Act referred only to male senators. Successive governments did nothing to change the law despite evincing support for women’s rights.

After years of frustration, the “Famous Five” petitioned the federal government in 1927 to refer the issue to the Supreme Court for its judgement. After some discussion on the exact wording of the question, the government did so, with the Supreme Court reaching its decision on 24 April 1928. The Justices unanimously ruled against admitting women into the Senate. While they agreed there was no doubt that women were “persons,” the Justices contended that women were not “qualified persons” within the meaning of Section 24 of the BNA Act. In contrast, women could become members of the House of Commons as Parliament had the authority under Section 41 of the Act to determine membership and qualifications of Commons’ members, a latitude that did not extend to senators.

The Justices argued that under English common law women were traditionally subject to a legal incapacity to hold public office, “chiefly out of respect to women, and in a sense of decorum, and not from want of intellect, or their being for any other reason unfit to take part in the government of the country.” While the word “person” was often used as a synonym for human being, and there was legal precedent that allowed for the word to be interpreted as either a man or a woman, such an interpretation was deemed inapplicable to this case. The Justices argued that it was important to examine the use of the word in light of circumstances and constitutional law. When the BNA Act was drafted in 1867, it was clear that the drafters intended that only men would be “qualified persons” as this was the convention of the time. The section, which listed the qualifications of members of the upper house, had also been clearly modelled on earlier provincial statutes, and under those statutes women were not eligible for appointment. This restrictive interpretation of the word “person” was underscored by the use of the pronoun “he” in the relevant sections of the Act. The Justices argued that had the BNA Act’s drafters intended to allow women to become senators, something that was inconsistent with common law practices of that time, they would have explicitly included women in the definition of “qualified persons” rather than rely on an obscure interpretation of the word “person.”

The Famous Five, with the support of the Government, took the case to the Judicial Committee of the Privy Council in London, at the time the highest appellant court of Canada. On 29 October 1929, the Judicial Committee overturned the Supreme Court’s judgement ruling that women were indeed “qualified persons” to sit in Canada’s Senate. Speaking on behalf of the Committee, Lord Chancellor Viscount Sankey said that the “exclusion of woman from all public offices is a relic of days more barbarous than ours.” Standing the question on its head, he asked why the word “person” should not include women. He put forward a “living tree” interpretation of Canada‘s Constitution, viewing it as something organic “capable of growth and expansion within its natural limits.“ Consequently, the Committee interpreted the Act in “a large and liberal” fashion rather than by “a narrow and technical constraint.“ Lord Sankey’s “living tree” doctrine subsequently became, and continues to be, the basis of how Canada’s Supreme Court interprets the Constitution to this very day.

Cairine Wilson went on to have a long and distinguished career in the Senate. She was the first woman to chair a Senate Standing Committee, presiding over the Public Works and Grounds Committee from 1930 to 1947. She chaired the important Immigration and Labour Committee from 1947 to 1961, a time when Canada was welcoming hundreds of thousands of immigrants from Europe each year despite its population being less than half of what it is today. In 1957 alone, Canada welcomed more than 280,000 immigrants, of which more than 37,000 were refugees who had fled Hungary after the failed Hungarian Revolution. In 1955, she was appointed Deputy Speaker in the Senate.

As chair of the Canadian National Committee on Refugees, a position she held from 1938 to 1948, Wilson controversially went against her own government’s support for British and French efforts to appease Nazi Germany in the late 1930s. She was also an outspoken opponent of anti-Semitism, and fought (sadly with only limited success) to open Canada’s doors to Jewish refugees fleeing fascism in Europe. In 1945, she became the honorary chair of the Unitarian Service Committee of Canada founded by Lotta Hitschmanova. The USC Canada became one of Canada’s leading non-governmental organizations, providing food, educational supplies, and housing to refugees, notably children, in war-ravaged Europe during the late 1940s and 1950s. It continues to be active today in developing countries. France made Wilson a knight of the Legion of Honour for her humanitarian efforts.

Cairine Wilson died on 3 March 1962, still an active senator. A secondary school in Orleans, Ontario, now a part of Ottawa, is named in her honour.

As a postscript to this story, it took the federal government four years to nominate the second woman to the Senate. Iva Fallis was appointed in 1935 by the Conservative government of R.B. Bennett. In 2009, the “Famous Five” were posthumously made senators. As of September 2015, 32 of 83 senators were women.

The Evening Citizen, 1930. “Woman Senator Is Appointed By Gov’t of Canada,“17 February.