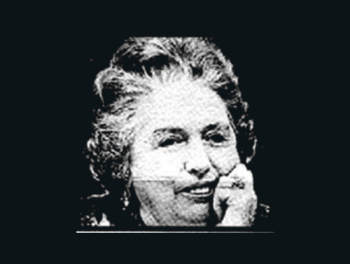 Birth control is an accepted part of modern life by all except the most religiously conservative. Competing brands of condoms in garish packages jostle for attention on the druggist’s shelves, while contraceptive pills, easily obtained by prescription, are covered by health insurance plans. It might therefore come as a surprise to learn that as recent as 1969 contraceptives were illegal in Canada. Even the dissemination of basic information about birth control was prohibited unless it could be shown to be “in the public good.” One of the big steps along the long road to repealing the law took place in Ottawa in the 1930s. However, the landmark legal decision that set change in motion had little to do with a woman’s right to control her body. Far more important were efforts to control the size of Canada’s poorer classes.

On 14 September 1936, Dorothea Palmer was arrested after visiting a welfare mother in the community of Eastview, now called Vanier. A week before her arrest, Palmer, who had received some training as a nurse in her native Britain before immigrating to Canada in 1928, had taken a part-time job in Ottawa with the Parents’ Information Bureau (PIB). The PIB, started in 1930 by Alvin Ratz Kaufman, a wealthy, Kitchener-based industrialist and philanthropist, provided poor families with pamphlets about birth control, as well as sample contraceptives. PIB workers would make house calls on poor mothers, typically by referral of a doctor or friend. After a mother filled out an application form, which asked a slew of questions, including her race, the number of pregnancies she had had, her husband’s occupation and salary, she could acquire contraceptives through mail order from the PIB for a small fee, or for free, if she were destitute.

Palmer was arrested by Constable Emil Martel and brought to the police station where she was questioned by Chief Richard Mannion. Believing she was not going to be charged, Palmer freely told the police what she was doing in Eastview, adding that “A woman should be master of her own body.” Mannion called the Crown Attorney who charged her with three counts under Section 207(c) of the 1892 Criminal Code for selling, advertising, and disposing of contraceptives. Although Palmer figured she would get in trouble with the Catholic Church, she was surprised to have been arrested. PIB workers had been told that what they were doing was legal as their actions were covered by the “public good” clause of the Act. However, the broad applicability of the clause, which was intended to protect doctors, was untested in court. Eager to set a legal precedent, Kaufman provided the $500 bail for Palmer’s release, and paid $25,000 for a top-rate legal team for her defence.

The trial, one of the longest in Canadian history, lasted six months. Witnesses, included social workers, clergy, and doctors, as well as twenty-one poor, francophone women visited by Palmer in Eastview. Judge Lester Clayton quickly dismissed two charges against Palmer, those of selling and disposing of contraceptives devices, due to lack of evidence, leaving the trial focused on whether or not the distribution of pamphlets on birth control fell under the “public good” clause of the Act.

The prosecution relied on medical opinions to show that birth control was unnatural, or dangerous, and that the distribution of birth control literature by lay people was not in the public interest. One obstetrician-gynaecologist called by the Crown argued that the control of a woman’s organs was above man’s law, and that birth control would lead to a woman experiencing “pathological conditions.” Another, a professor of gynaecology at the University of Montreal, spoke against all forms of birth control other than the rhythm method. On cross examination, he admitted that his objection was religious. Some doctors, while supporting birth control for existing mothers who wanted to space future pregnancies, argued that it should be handled solely by medical professionals. However, the testimony of medical experts was undermined when they acknowledged that they actually knew little about birth control; the subject was not taught in medical school.

Palmer’s defence team focus its arguments on the supposed sociological and economic virtues of birth control rather than human rights. Although the directors, both women, of the Toronto and Hamilton birth control clinics spoke about a woman’s reproductive rights, and the welfare of mothers, as did the Eastview mothers who didn’t want more children, their testimony was overshadowed by eugenic views expressed by male witnesses.

Prior to World War II, eugenics was a respected scientific theory, based on Darwinism, that aimed to improve mankind through selective breeding for beneficial human characteristics (positive eugenics) and the discouragement of negative traits through birth control or sterilization (negative eugenics). The Eugenics Society of Canada, established in the early 1930s, lobbied for the establishment of a national policy of “race betterment” by enacting legislation to “safeguard racial progress.” Many respected progressive Canadians were eugenics supporters, including Tommy Douglas and Nellie McClung. Both Alberta and British Columbia enacted legislation permitting the sterilization of unfit and feeble-minded individuals that wasn’t repealed until the early 1970s. Unfortunately, the terms “unfit,” and “feeble-minded” were open for interpretation. For many, racial improvement meant advancing the white, Anglo-Saxon, protestant “race” at the expense of others. Eugenics supporters also argued that the upper and middle classes were being outbred by the poor and mentally ill, leading to genetic, social, and economic disaster. To correct the birth differential, birth control should be made available to the masses. The reputation of eugenics crashed during World War II when Nazi Germany used the theory as justification for its racial policies that led to the death of millions in its concentration camps.

A number of prominent Canadian eugenicists testified at Palmer’ trial, including Alvin Kaufman, Treasurer and founding member of the Eugenics Society of Canada, Dr. William Hutton, the Society’s president as well as the Brantford Medical Doctor of Health, and the Reverend Dr. C.E. Silox, the Secretary General of the Social Service Council of Canada. Both Kaufman and Silox testified that since poor, unemployed workers were having large families, the only alternative to birth control was revolution or communism. Silox raised the Malthusian spectre of uncontrolled population growth requiring state intervention, or the “invention of new deadly diseases, more terrible famines, and bigger and better wars” to stop it. If that wasn’t controversial enough, Silox argued that French Canadians were deliberately outbreeding English Canadians while driving down their standard of living. By giving poor francophone families access to birth control, he claimed that Anglo-French tensions would be eliminated, and English dominance maintained. Le Droit, Ottawa’s French language newspaper, angrily retorted that the trial was all about killing French Canadians in the womb.

Dr. William Hutton presented dubious statistics purporting to show that the average intelligence of Canadians was declining due to a higher fertility rate of the less intelligent, a view supported by a University of Toronto psychiatrist who argued that Canada faced a biological crisis as a consequence. Further testimony by a Toronto economist underscored the burden to society of supporting the unemployed of Eastview, noting that the community’s unemployment rate was more than double the national average, and that births in the town outnumbered deaths by more than 150 per year. Similarly, the Secretary of the Toronto District Labour Council argued that birth control should be used to “govern the level of the nation’s population” until surplus workers were absorbed, or the economic system changed.

On 17 March 1937, Judge Clayton, swayed by the economic and social arguments made by the defence, ruled that Dorothea Palmer’s actions were indeed in the public interest. In his summing up, there was no mention of women’s rights. With the subsequent appeal by the Crown dismissed, Clayton’s ruling opened the door a crack for birth control in Canada.

Sadly, for all her courage, Palmer received little support from her husband, relatives and Church who disapproved of her stand. During her trial, a stranger, passing on the street, slapped her face. Palmer received obscene phone calls at all hours, and was sexually assaulted by a man who told her “I’ll show you what it’s like without any birth control.” Fortunately, a knee in the groin and a punch in the face stopped her assailant. After the trial, she quit the PIB, saying her work was done, and faded into obscurity. Palmer, a pioneer for women’s rights, died in 1992.