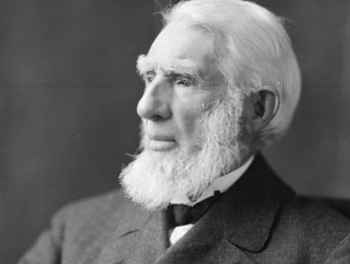 Once the Rideau Canal was finished in 1832, Bytown had to find a new economic base. Surrounded by trees and with England crying out for lumber, it was only natural that the timber trade, in different phases, would become a staple of the new town situated on a major transportation route. One of the giants of the lumber business was J. R Booth, born in Waterloo, Quebec, who arrived in Ottawa in 1857 and lived here until his death on Dec. 8, 1925.

There are many anecdotes about Booth and his various idiosyncrasies but a good, recent book is J. R. Trinnell's “J. R. Booth—The Life and Times of an Ottawa Lumber King” It is a mixture of anecdotes and business statistics and a chronological list of happenings in Booth's long life In that life, Booth built and operated three railways in Ontario, was burned out a number of times, but always rebuilt, married off one of his grand daughters to a Danish prince and lived almost 99 years, outliving five of his eight children in the process.

"Booth was known as a frugal man who didn't put on airs, despite his wealth and position."

Booth was known as a frugal man who didn't put on airs, despite his wealth and position. One anecdote concerns a particularly self satisfied salesperson who cane to meet Booth one morning for a business meeting. Spying a scruffy looking individual standing outside the office, he offered him a dime to carry his sample case upstairs to Mr. Booth's office. The man obliged and, when asked where Mr. Booth was, said “You're looking at him! ” Where's my dime? ” This is a story from my wife's grandfather who knew Booth in the early part of the last century. Another well known anecdote concerns the time Booth was criticized by a driver for only giving a ten cent tip. The rationale was tha t Booth's son always gave a quarter. Booth replied, gruffly “That's alright, the boy has a rich father, but I was an orphan! ”.

Booth came to the town now known as Ottawa in 1857 and, many years later, shortly before his death was asked about his earliest memories of the town. He responded by commenting on the smell of the place. Thomas Anglin, a Montreal MP also commented in Hansard about the smell and dirt of “Ourtown” in the early 1880's. One of my own recollections from when I first arrived in Ottawa in 1954 was the overwhelming smell of the pulp mills across the river early one April morning While the closing of the pulp mills was an economic disaster for some, it did improve air quality! Before the famous fire of April 26, 1900, Booth lived at the corner of Wellington and Preston streets, only a block or two from his mill. His neighbours on Wellington (also known as Richmond Road at the time) were the Salvation Army Rescue home and the Victoria Brewery. Further up Wellington were a “lying in” hospital, a Mr. Frank Morgan and the Victoria Hotel. All were destroyed in the fire. Mr. Booth then built his home on Metcalfe St., near Somerset which later became the Laurentian Club.

"The big event of the 1924 social season was the wedding of Booth's grand-daughter Lois, to Prince Erik of Denmark."

The big event of the 1924 social season was the wedding of Booth's grand-daughter Lois, to Prince Erik of Denmark. They were married at All Saints Anglican Church in Sandy Hill and the deputy chief of police at the time, Gilhooly, said “Yesterday afternoon, every available man was pressed into service, but ten men could not handle a crowd of ten thousand, 90% of whim were women who would not do as they were told but smiled and giggled all the time” (Ottawa Journal, Feb. 12,'24) J. R. Booth did not attend the wedding. There was no fairy tale ending to the wedding. The couple had two children but Prince Erik arranged an annulment of the wedding because of a friendship between Lois and Thorkeld Julesberg, the Prince's secretary. Lois married Julesberg after the annulment, bu t died in Denmark in 1941. Her body was transported back to Canada and she was buried in Beechwood cemetery Her father's home was at 285 Charlotte St., and was eventually sold to the Soviet government for their Embassy. The old building burned down on January 1, 1956, because the Embassy staff refused to allow Ottawa firefighters access to “Soviet Territory”!

So ends one of the interesting stories about Ottawa history, of a “poor boy” who made good and whose money was able to advance his family to the highest levels of society.

One final comment—on the day after the wedding, the bride's father joked that he was naming himself the Count de Cost for the proceedings. After his death in Dec. 1925, at his request, J.R. was buried in a relatively simple ceremony but crowds still lined the streets to honour the “Old man of the lumber industry”