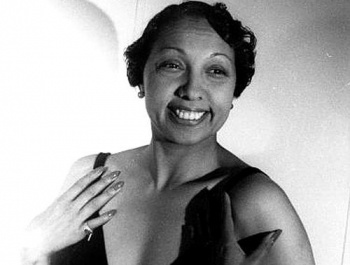 If you wanted great entertainment, especially jazz, in Ottawa during in the 1950s, you went to the Quebec side of the Ottawa River. Among the many nightclubs located there, the most prominent were probably the Standish Hall Hotel in Hull and the Gatineau Country Club in Aylmer. At these locales, one saw such legendary figures as Duke Ellington, Louis Armstrong, and Sarah Vaughn. On 26 August 1955, the curtain went up at the Gatineau Country Club on the incomparable Josephine Baker, known in her adopted France as simply “La Baker.” She was in Ottawa for a week’s engagement, her first and only visit to the nation’s capital. 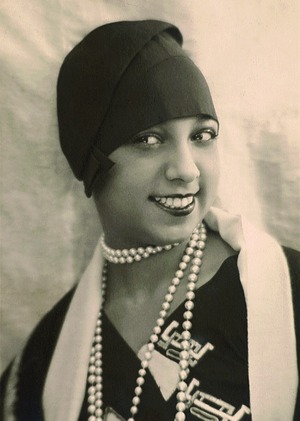 Joséphine Baker photographiée par Paul Nadar, 1930.Josephine Baker was born Freda Josephine McDonald in 1906 in St. Louis, Missouri, the daughter of a washerwoman and a vaudeville drummer who quickly abandoned his young family. A poor black girl growing up in the United States at its segregationist worst faced bleak prospects. As a young child she was cleaning houses for rich white people. By age thirteen she was waiting tables, and by age fifteen was already twice married and twice divorced. The only thing she got out of the second marriage, which lasted but a month, was her surname “Baker” which she kept throughout her life despite two more marriages…and two more divorces.

Despite this unprepossessing start in life, young Josephine Baker found her calling as an entertainer. In 1919, she joined a black vaudeville company. Two years later she came to New York, then in the midst of the Harlem Renaissance, to play in The Dixie Steppers. While initially judged too black to be in the chorus, she got her chance when a chorus girl got sick. She played the comic role of the inept dancer at the end of the chorus line who initially bungles the routine only to blossom into the troupe’s finest dancer.

Seizing an opportunity to dance in Paris, she voyaged to France in 1925 to join La Revue Nègre. Paris was a revelation. Here, a black woman could stay at the finest hotels and dine in the best restaurants without discrimination. Instead of being considered a second-class citizen or worse, she was admired and welcomed.

After touring Europe with La Revue Nègre, she joined the famous Folies Bergère. She was a huge success, her famed cemented by a dance in which she wore only a skirt made of sixteen, strategically placed bananas. Jaded French audiences had never seen such a performance. Its raw sensuality stunned them. By 1927, at the age of only twenty-one, she was the highest paid female entertainer in the world. 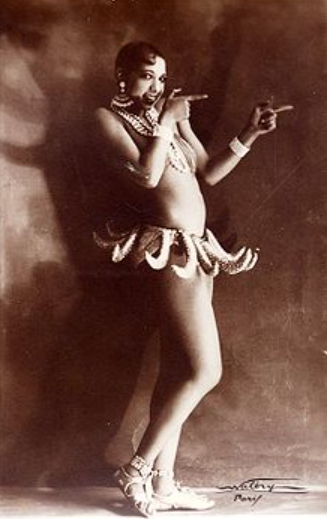 Josephine Baker, 1927, Folies Bergère, Un Vent de Folie, Waléry, Paris.She became a film star, appearing in Zouzou (1934) and Princess Tam-Tam (1935), as well as several other films. Princess Tam-Tam was banned in the United States. It was not clear what shocked white America more, showing a black woman in a relationship with a white man, or a black woman cast in the lead role. She became an inspiration to oppressed African Americans.

By the mid-1930s, her performance style began to change. Out went the primitive, catlike eroticism of her youth in favour of the mature, French chanteuse in the style of Edith Piaf. Parisian audiences adored her.

In 1935, Baker returned briefly to the United States to perform in New York in the famous Ziegfeld Follies. It was not a happy experience. Now a star, she was allowed to stay in one of New York’s big hotels, but only if she used the service entrance. Her performance, which included dancing with white men, was still beyond the pale of even a liberal New York audience. After newspapers insulted her and made racial comments, she returned disheartened to Paris.

In 1937, she married a wealthy Frenchman, Jean Lion. While the marriage didn’t last, she became a naturalized French citizen, renouncing her American citizenship. She famously said that the Eiffel Tower “looked very different from the Statue of Liberty, but what does that matter? What was the good of having a statue without the liberty?”

When war came, Baker took on a new role as spy and resistance fighter. Using her fame as a shield, she smuggled secret messages amongst her sheet music to the Free French. Later, after fleeing to North Africa, she performed for Allied soldiers. She insisted that she would only perform in front of integrated audiences. After the war, the French government awarded Baker the Resistance Medal with Rosette and made her a Chevalier d’honneur.

She also took on a new persona, that of a grande dame.  Once famed for dancing in skimpy costumes, she now showcased the finest in French fashion, wearing designer gowns from Christian Dior and other leading fashion houses. In 1947, she married Jo Bouillon, a French orchestra leader.

She tried another return to the United States in 1951. She again insisted that she would only perform in front of non-segregated audiences. Her U.S. tour, which began in Miami, was a great success until she was denied service at New York’s prestigious Stork Club. After making an official complaint to the Club, she got into a battle of words with the famed American journalist Walter Winchell who accused her of being a communist. This was at the height of Senator McCarthy’s anti-communist crusade that led to hundreds of American entertainers being blacklisted. Baker was banned from the United States for nine years. 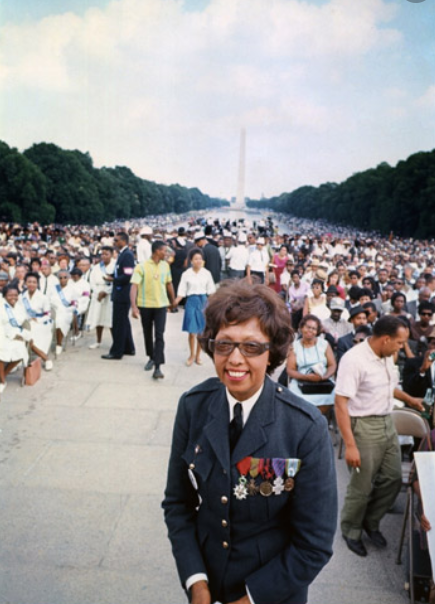 Josephine Baker, March on Washington, 1963, Château des Milandes.Through the 1950s, Baker and Jo Boullion raised a group of dozen adopted children of all races which they called The Rainbow Tribe at Baker’s chateau, Les Milandes, and 700-acre estate in the Dordogne region of France. It was Baker’s effort to demonstrate that people of all nationalities could live together in peace and harmony.

Maintaining a fifteenth-century chateau while raising such a large family became even more onerous when Baker’s fourth marriage failed. Never a good business person, and very generous, Baker ran up large debts. Eventually, she lost her chateau to creditors, and had to return to the stage to repay her debts. Helped by Princess Grace of Monaco, she and her Rainbow Tribe took up residence in a home in Monaco.

In 1963, Baker was invited to join the March on Washington with Martin Luther King Jr. and other civil rights leaders. Wearing her French military uniform with all of her medals, she appeared on the podium where she gave a short speech of support. She said that it was “the happiest day of her life.”

That summer of 1955, when Josephine Baker came to Ottawa, the great entertainer stayed at the Château Laurier Hotel while she performed at the Gatineau Country Club. Travelling with her were her French maid, Miss Jeanette Renaudin, her musical director, Mikos Bartek, nine trucks of clothes, and a photograph of her husband, Jo Bouillon. Press reports said that her wardrobe was insured for $250,000 ($2.5 million in today’s money).

She started her visit with a press conference and special performance at the Press Club in Ottawa a few days before the official start of her gig. Dressed in a slinky black dress, she wowed the journalists in the room who wondered whether she would have a wardrobe malfunction. “If accidents happen, well, c’est la mode,” she said. Bob Blackburn, the Citizen reporter, said there was no describing her, “even the most extravagant adjectives can’t do her justice.”

Talking about her decision to go to Paris back in 1925, Baker told that journalists that she had been looking for more freedom to express herself. In the United States, the only thing a black woman could do in show business was to wear a bandana on her head. She hoped that her example would open doors in other fields for other African Americans.

She also claimed to have been one of the first entertainers to appear before a television camera. The event occurred in 1935 in the BBC Studios in England. She said that she was put in a little cubicle with her face painted white since that was the only way she could be seen on the equipment of that time. “Image me with a white face!” she exclaimed. 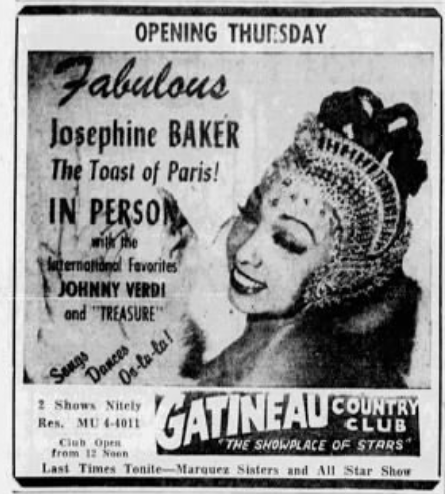 Advertisement, Ottawa Citizen, 24 August 1955.At the Press Club, she sang in both French and English, performing her old favourites such as J’attendrai. There was a lot of focus on her wardrobe for her performance which ranged from a simple white tailored blouse to extravagant evening gowns. One gown, “a sheath-like creation” was decorated in an oyster shell pattern. As she walked, the shells opened to reveal smaller shells and little pearls.

Other engagements in Ottawa included a visit to the French Embassy and radio interviews in both languages.

On opening night in the Carnival Room at the Gatineau Country Club, Josephine Baker received a standing ovation. She wowed the audience with her showmanship, her informal bantering with the audience, and her ability to sing straight from the heart. Among the many songs she sung were Unchained Melody and Begin the Beguine. She modelled gowns by Christian Dior, Jean Dessès, and others. The Ottawa Citizen reported “Here is an entertainer who deserves all the superlatives one can name. She will live in your memory for many years to come. This is Josephine Baker, the incomparable.”

Josephine Baker, entertainer sans pareil, World War II hero and civil rights leader, died in April 1975 at the age of 68, struck down by a cerebral hemorrhage, one day after opening a new show at the Bobino Theatre in Paris celebrating fifty years in show business. A week later, 20,000 people attended her funeral at La Madaleine in Paris. The French government gave her a twenty-one-gun salute. She was buried with full military honours in le Cimetière de Monaco in Monaco.

An inspiration to many, including Beyoncé, today’s megastar, Josephine Baker once said “Surely the day will come when colour means nothing more than the skin tone, when religion is seen uniquely as a way to speak one’s soul, when birth places have the weight of the throw of the dice and all men are born free, when understanding breeds love and brotherhood.”

We have a long way to go.

Ottawa Citizen, 1955. “They Call Her Fabulous But That Is Inadequate,” 24 August.