Lotta and the USC Canada 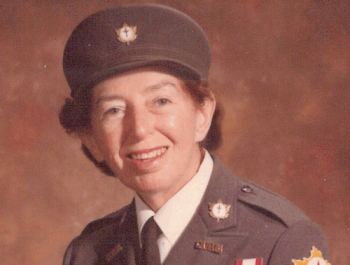 For older Canadians, Lotta Hitschmanova needs no introduction. Each year, until the early 1980s, her distinctive voice would be heard on the radio and television urging people to give generously to the Unitarian Service Committee of Canada (USC) located at 56 Sparks Street, Ottawa. She had established the Committee in 1945 to help the poor and suffering, especially children, in war ravaged Europe. Later, the USC shifted its attention to developing countries. Always dressed in a quasi-military, olive-green uniform complete with hat, maple leaf badges, and a chest full of medal ribbons received from grateful nations, Lotta was one of Canada’s most recognizable personalities. Overseas, she became the face of Canadian humanitarian efforts, always present where the need was greatest.

Lotta’s story began in Prague, in what is now the Czech Republic. Born into a loving family on 28 November 1909, her father was Max Hitschmann, a prosperous industrialist, and her mother Else, a prominent socialite. Lotta received a first class education, studying at the University of Prague and the Sorbonne in Paris. In addition to a PhD in philosophy, she received diplomas in five languages, English, French, German, Spanish and her native Czech, as well as one for journalism. Somehow, she also found time to earn a Red Cross nursing certificate. In the late 1930s, she became a journalist for Czech and other eastern European newspapers, earning a reputation for being an outspoken opponent of Nazi Germany.

Her comfortable life was shattered when the Nazis marched into Czechoslovakia following the Munich Agreement between the major European powers and Adolf Hitler. She was forced to flee for her life, leaving all she knew behind. She was never to see her parents again; they were to die in a German concentration camp. Her sister and brother-in-law fled to Palestine; years later they joined Lotta in Canada.

Almost penniless, Lotta first went to Paris and then to Brussels, where she resumed her journalism career before having to flee once more when Germany invaded Belgium in 1940. It was about this time that she began to go by “Hitschmanova,” the Slavic version of her name, instead of the Germanic “Hitschmann” as a personal response to Nazi aggression in Europe. Escaping to the south of France, she settled down to a precarious life in Vichy-controlled Marseilles, working for an aid agency as an interpreter. This is where she first came into contact with the Unitarian Service Committee, a Boston-based relief agency that ran a medical clinic in the city. Refused a visa to immigrate to the United States, she was later granted a visa “for the duration,” by the Canadian government at the request of the Czech government in exile in London. She arrived in Montreal in July 1942, having crossed the perilous, submarine infested Atlantic by boat, travelling via Spain, Portugal, Bermuda, and New York.

She almost immediately found a job as a secretary for a lumber company owned by a Czech family who knew her parents. Three months later, she got a job as a postal censor in Ottawa, working out of a temporary, wooden, war-time building at Dow’s Lake. She also used her journalist skills, writing for the Ottawa Citizen, and talking about Czechoslovakia on the local French-language radio station. In 1944, she temporarily moved to Washington D.C. to work with the refugee relief organization of the newly formed United Nations. But upset with how the agency operated, and concerned that she might not be able to stay in the United States or Canada after the war, she returned to her censor’s job in Ottawa.

On 10 June 1945, Lotta chaired in Ottawa the first meeting of the Unitarian Service Committee of Canada with the encouragement of the Boston-based parent organization. Four persons from the parish of the Ottawa Unitarian Association, whose church was then located at the corner of Elgin and Lewis Streets, attended this inaugural meeting. Lotta’s subsequent task was to contact the five other Unitarian churches in Canada to get their support. At the Committee’s second meeting, it was agreed that the purpose of the organization was to provide relief to distressed people, especially children, of Czechoslovakia and France. Encountering difficulty in registering with the government, Cairine Wilson, Canada’s first woman senator, was invited on board in the role of honourary chairperson, giving the fledgling agency political clout. Two months later, the Committee was registered under the War Charities Act as “The Unitarian Service Committee of Canada Fund.” 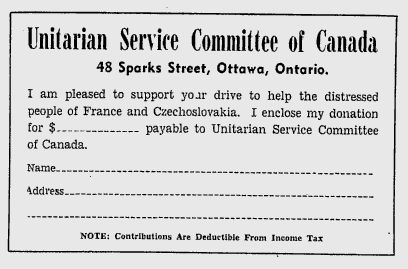 USC Canada Fundraising Advertisement,
The Evening Citizen, 14 April 1947Initially, the USC operated out of Lotta’s home at 668 Cooper Street, before moving into larger premises, first at 48 Sparks Street, then down the street to 78 Sparks, and finally, in the mid-1950s, to its quarters at 56 Sparks Street—which was to become one of Canada’s best-known addresses. During its first year of operation, volunteers, mostly women, collected and packed 30,000 kilograms of used clothing in 150-pound, wooden crates destined for destitute French and Czech children.  Shipping was provided free by Canadian Pacific Railway within Canada, and by a French aid agency from Canada to Paris. Also sent were medical supplies, “utility kits” consisting of toiletries and educational supplies for children, dried milk, and food. Among the USC’s first projects was a home for physically handicapped children in France, many of whom had lost limbs in Allied air raids. Later projects included apprenticeship programmes, the provision of artificial limbs to youngsters, and a foster-parents scheme where Canadians could sponsor a child for three months for $45.

That first year of operation also saw Lotta becoming a Canadian landed immigrant, giving her the security of a permanent homeland. She also began to travel extensively in Canada, meeting with service organizations and churches, and providing press interviews to spread the word about the extent of the misery in Europe, and what Canadians could do to help through the Unitarian Service Committee of Canada. In 1945, the Committee raised $64,000, equivalent to almost $900,000 in today’s money. The following year, it raised $180,000 in money and gifts-in-kind, equivalent to roughly $2.5 million today. It was about this time that Lotta adopted her military-style costume, which was based on a U.S. army nurse’s uniform. In addition to being practical, it identified the USC, and gave her an air of authority.

The establishment of the Unitarian Service Committee of Canada redeemed a pledge Lotta made to herself when she arrived in Canada that she would give back to society, and to the nation that had given her a new home. Initially, she thought that her work would last only a couple years. However, that naïve view was quickly dashed; there was always new crises and new needs. As the USC’s programmes in Czechoslovakia and France wound down, the Committee shifted its attention to southern Europe, including Italy and, most importantly, Greece which in 1950 was emerging out of a bitter civil war. Campaigns were organized, including “Bread for Greece,” the “March of Diapers,” and “Houses for Greece.” While broader community needs were not overlooked, children were always the focus of the USC’s activities. As Europe got back on its feet through the 1950s, the USC of Canada gradually moved its operations to areas of greater need including Korea, India, the Gaza Strip, Bangladesh, Hong Kong, Indonesia, and southern Africa. 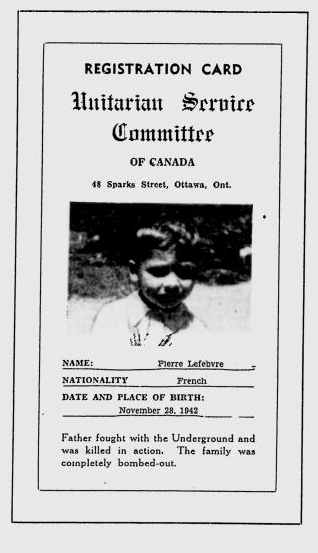 Sample Registration Card of a Child War Victim and case history that would be forwarded by the USC Canada to a Canadian “foster family.”
The Evening Citizen, 14 April 1947.

At all times, the Unitarian Service Committee’s aid programmes were founded on the basis of caring for fellow human beings, respect, and partnership. Projects were run locally, with donors and aid recipients equally responsible for success. USC involvement was also expected to wind down over time, with aid recipients becoming self-reliant, taking over the project themselves.

Through the decades that followed, Lotta Hitschmanova worked tirelessly, rising as early as 5am after putting an eighteen-hour day. She expected her staff to do likewise. She apparently preferred to hire middle-aged women with no children since they would be less distracted by outside activities, and able to devote themselves fully to the cause. She also stressed frugality; stretching the dollar was important, both as a way of providing more for her children abroad, and keeping donors happy. Despite being a harsh taskmaster on herself and staff, Lotta was much loved at home and abroad. Her success could be measured by the ribbons of honour which she proudly wore on the breast pocket of her uniform. These included the Order of Canada, first as Officer and later as Companion, the Canadian Centennial Medal, the Queen Elizabeth Silver Jubilee Medal, the Order of Civil Merit from Korea, la Médaille de la Réconnaissance française, la Médaille d’Honneur de la Croix Rouge, the Decoration of Honour and Peace from the Netherlands, the Red Cross Decoration and the Athena Messolora Gold Medal from Greece, and the Meritorious Order of Mohlomi from Lesotho.

In 1982, Lotta Hitschmanova, suffering from the early stages of Alzheimer’s disease, retired as Executive Director of the USC Canada. She died in Ottawa on 1 August 1990. But her work lives on. The USC Canada, which is still based at 56 Sparks Street, remains active in developing countries around the world. Today, with an annual budget of about $6 million, its core focus is food production, biodiversity and health eco-systems, implemented through its “Seeds for Survival” programme funded in part by the Canadian Department of Foreign Affairs, Trade, and Development as well as thousands of individual donors. Faithful to the approach taken by Lotta, assistance the USC Canada programme supports women and young farmers through training, enabling them to live independent and secure lives in an ecologically sustainable manner. Lotta would have been proud.