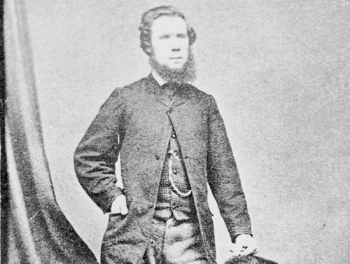 On February 11, 1869 in the Carleton county gaol, Patrick James Whelan was hanged for the murder of Thomas D'Arcy McGee. He went to the gallows protesting his innocence and, without all the forensic evidence TV keeps showing ,there is no way we can ever be sure he was truly guilty. There are some who believe he was innocent and that his conviction was rushed to show the efficiency of the police, prosecutors and the government of the day. The murder of McGee had taken place the previous April and Whelan was arrested within 20 hours The basis of his conviction was his possession of a revolver of the same calibre as the murder weapon, stories that he was a Fenian and the testimony of a person who had shared his cell in the gaol who swore Whelan had confessed to him that he, Whelan, had indeed carried out the shooting. This evidence was enough to convict Whelan and led to the last public hanging in Canada, right here in staid old Ottawa. A Wikipedia article states that five thousand people attended the event. Whelan was buried on the grounds of the gaol, but no one knows exactly where. Remains were discovered some years later, but could not be confirmed as those of Whelan, Whelan's ghost is still said to haunt the gaol, still protesting his innocence. One fact is that public hangings were banned in Canada about five months after the execution.

Whelan was of Irish extraction having been born in County Galway c. 1840. He was a tailor by occupation and apparently considered good at it. He came to Ottawa from Montreal in 1867 and was employed by the firm of Peter Eagleson. The Canadian on line encyclopedia describes him as "skilled at this trade, fond of horses, shooting, dancing and drink". This would describe my own Irish ancestors and many current Irish Canadians! While he was an apprentice tailor in Quebec City after 1865, he volunteered for military duty to oppose Fenian invasions of Canada. He married Bridget Boyle in 1867 and made his home in Ottawa. Perhaps a dedicated researcher can find where his residence in Ottawa was, or his immigration record. Ship landing records are on file at the National Library and Archives from 1865 on. Names and residences are in the City directories.

To the Canada of 1866-67 the Fenians were a scary commodity. Mostly Irish expatriates and many of them hardened veterans of the US Civil War (both Union and Confederate) they were dedicated to conquering Canada to hold as ransom for Ireland. They invaded Canada in 1866 and defeated a hastily organized force of militia and some British regulars at Lime Ridge near Fort Erie. They hoped for an Irish uprising in Canada, and when that did not occur they retreated to the United States where they continued to agitate. Another attempt was made south of Montreal in 1870. All the details can be found in Senior's book The Last Invasion of Canada for those interested.

Whelan was said to be sympathetic to this group, but there is little, if any, hard evidence to go on. Why did he volunteer to fight the Fenians in 1866? There are several facts that suggest he may have been a scapegoat. There was intense political interest in his trial as evidenced by the fact that the Prime Minister, Sir John A. Macdonald sat beside the presiding judge during the initial trial. The judge was William Richards who was appointed to the Court of Queen's Bench after that trial just in time to preside over the appeal of Whelan's death sentence. The vote to reject the appeal was 2-1, with Richards casting the deciding vote. While historians are not supposed to use today's standards to make judgments on pat events, there seems to be grounds for suspicion, at least.

A play, “Blood on the Moon” has been written that queries the conviction and a song "The Hangman's Eyes" has been composed about Whelan's execution A little known historical fact is that real Fenians, who invaded Canada were originally sentenced to death, then the sentence was commuted to life in prison. All of the individuals concerned were out of prison within a decade after the events, except for one individual who died of natural causes during his incarceration A review of government records indicates that a question as to what correspondence there had been about these prisoners was not answered in the House on the recommendation of a House review committee. If this kind of generous treatment was accorded to the real Fenians, why not Whelan? An answer to that question eludes us to this day.