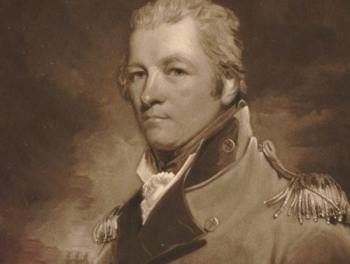 Exactly 200 years ago this month, on Aug. 28, 1819, a 54-year-old English aristocrat — convulsed with excruciating pain and surrounded by horrified, helpless onlookers — died in a barn near the fledgling village of Richmond, about 25 kilometres southwest of present-day Parliament Hill.

What killed the Duke of Richmond has not been a source of great controversy over the past two centuries, though there have been occasional whispers about the cause of his death.

But one of Newfoundland’s top veterinarians — who is also a medical historian and a leading Canadian expert on rabies — is trying to shake the long-held belief that the duke succumbed that day to the effects of a bite two months earlier from a rabid fox.

Instead, argues Dr. Hugh Whitney, Newfoundland and Labrador’s chief veterinary officer for 30 years before his retirement in 2015, the more likely killer was booze.

Whitney, in defending an argument he first presented at an international rabies conference in 2009, and then in a lengthy 2013 article and 2017 addendum in the peer-reviewed journal Ontario History, isn’t just challenging one of the foundational tales of Ottawa history.

He’s questioning a story that has become entwined in the identity of Richmond village, Ottawa’s oldest constituent community, where a welcome sign shows a cartoon fox posed menacingly above a portrait of the doomed duke.

The community’s 2018 bicentennial celebrations even featured a kid-friendly mascot in a fox costume alongside an actor playing the duke.

Time has clearly tamed the sense of tragedy surrounding the Duke of Richmond’s death. But what really killed him?

Years of alcoholic excess, Whitney contends, may have afflicted the duke with chronic liver disease and terminal hepatic encephalopathy, perhaps leading to a severe final episode of delirium tremens — the dreaded “DTs” that can fatally strike alcoholics abruptly deprived of liquor, and which can produce extreme disorientation, painful spasms and other symptoms similar to rabies.

Whitney, a St. John’s-based adjunct professor of biology at Memorial University, has reopened one of the oldest and coldest of all cold cases in Ottawa history, a sorrowful and momentous death pre-dating even the founding of Canada’s future capital as Bytown in 1826.

And the victim — Charles Lennox, the 4th Duke of Richmond, Lennox and Aubigny — just happened to be the most powerful political and military figure in British North America at the time.

“It is quite clear that the duke had a long history of alcohol abuse,” says Whitney. He notes that several reliable contemporary sources, including members of the duke’s own family, “show him to be in poor health” at the time of his visit to Upper Canada — “comments on his deteriorated appearance followed him wherever he went” — and that “he had a habit of drinking to excess with junior officers and soldiers, as was done a few days before his death.”

There’s also a handwritten document from 1879 that was recently unearthed in the archives of the McCord Museum in Montreal, and which records the recollections of Maria Hill. She was the proprietress of the Richmond inn where the duke slept the night before his death. The same woman later prepared his body for transport to Quebec City for burial.

“She was pronouncedly sceptical” of the rabies story, noted the 1879 manuscript, “and believed hard drinking to have been the real cause.”

Along with much other direct evidence of the duke’s boozy lifestyle, Whitney offers some interesting circumstantial proof in the label of a renowned brand of Irish whiskey, Kinahan’s, which has featured the insignia “LL” on every bottle from the early 19th century to the present day.

The initials stand for “Lord Lieutenant”, the position the duke held in Ireland from 1807-1813. During this time, according to the company’s website, Richmond “was so impressed with the whiskeys made by Kinahan’s that he ordered all stocks at the Kinahan’s Dublin vaults to be taken exclusively for his private use, marking each cask with ‘L.L.’ ”

A descendant of King Charles II and heir to a sprawling country estate in West Sussex, the duke served as colonial Canada’s governor-general and commander-in-chief while the smoke was still clearing from the War of 1812, in the days before such roles were stripped of all but their titular potency.

Properly addressed as “His Grace”, the duke took up his duties in Canada in July 1818. Barely a year later, he completed his fateful two-day visit to Richmond — the year-old soldier settlement named in his honour — and was on his way back to the colonial capital of Quebec City when he died.

The visit to Richmond was part of a two-month tour of Lower and Upper Canada that had also taken the duke in late June 1819 to what is now Sorel, Que., northeast of Montreal, where he was reportedly bitten by a semi-domesticated fox.

There are many versions of what happened in that incident. In one, Richmond is nipped on the hand while breaking up a fight between the fox and his pet dog, Blücher; in another, the duke foolishly tries to pet the heat-agitated fox with predictable results.

By the time he reached the Richmond settlement nearly two months later, the duke was showing signs of exhaustion and illness.

Though he was the star of a great banquet in his honour on Aug. 26 at the village’s main gathering place, Hill’s Masonic Arms Inn, those around the duke had begun to worry about his haggard appearance and fitful behaviour.

According to one of his aides, the man of the hour was eventually unable to consume his usual watered brandy or wine because he had trouble swallowing or would even convulse at the sight of a drink.

Such documented observations have bolstered the idea that the duke was stricken with rabies, also known as hydrophobia because it can induce an irrational fear of water.

But “we might well ask,” counters Whitney, “whether the duke’s problem was a difficulty in swallowing any liquid (the suggested hydrophobia) or whether it was actually the alcohol that his body was now rejecting.”

Whitney and Maria Hill aren’t the only ones to suggest alcohol was the main culprit in the duke’s death. An 1899 history of Ontario place names by author Herbert F. Gardiner stated: “There are old residents in Perth who maintain the tradition that it was delirium tremens and not hydrophobia that cut short the career of the Duke of Richmond.”

Whitney argues in his research paper that, “the constant reference to the Duke’s hydrophobia seems overstated, while other common symptoms of rabies” — including “extreme irritation at the site of the initial infection, and an ascending paralysis” — are absent.

“What first started me wondering about the truth of this story,” Whitney stated in an email, “was that his dog, Blücher, had reportedly been in a fight with the fox, but lived for years afterwards with no indication that it became infected with rabies.”

The trip from Richmond back to Quebec was expected to take the duke’s entourage along the Jock River (then known as the Goodwood after the duke’s English estate) to the start of a rough-cut roadway (today’s Old Richmond Road) to the future site of Ottawa — specifically an Ottawa River boat launch (Richmond Landing) at what came to be known as LeBreton Flats.

The many landmarks in Ottawa named for the duke are a testament to the enduring hold his story has had on local imaginations, a saga “of such a tragic and unusual nature that it still looms large in the legends of the district,” as author Wilfred Eggleston put it in his 1961, National Capital Commission-authorized history The Queen’s Choice.

Nearly every Ottawa history book details how the duke scrambled madly out of a canoe just a few miles downstream from Richmond and — suffering severe spasms — took shelter in the barn where he soon drew his last breath, surrounded by attendants.

The approximate spot where the duke died has been marked since 1926 by a stone cairn and plaque proclaiming it a site of national historic significance.

Whitney says the various landmarks named for the duke and other such tributes are exactly the kind of reputation-burnishing legacies Richmond’s acolytes were safeguarding when they spread the idea that his death was caused by rabies rather than the ravages of alcohol.

“Noblemen need to die noble, heroic deaths to maintain the myth of their superiority,” Whitney told the Citizen, expanding on what he described in his 2013 essay as “the protective bubble placed around the nobility that deflects analysis or critique.”

In short, he says, “I personally think that the rabies diagnosis was an attempt to find a more noble way for a nobleman to die. One cannot be definitive about the past, though; we can only make arguments one way or another.”

George Neville, past president of the Historical Society of Ottawa, recently undertook research on the Duke of Richmond’s funeral and burial in Quebec City for a society publication.
While he believes there’s a stronger case for death by rabies, Neville said Whitney’s overall “hypothesis is reasonable” because it’s well known that the duke “drank wine particularly heavily throughout his life at his many and frequent social engagements; hence, alcoholism could have been a contributing factor to his death.”

On the other hand, said Neville, severe alcohol withdrawal seems unlikely given observations of the duke drinking less than 48 hours before his death.

And “there were witnesses to the fox bite,” he added. The two-month time period for the infection to manifest is about right, and the duke’s documented symptoms in Richmond fit what’s expected for the progression of the disease.

“As far as I’m concerned,” he said, “the duke died from rabies.”

On a recent afternoon along Old Richmond Road at the place where the duke died, just a brief walk — a much briefer mad dash — from the lazy, winding Jock, torrential rains pelted the cairn for 20 minutes. Such a downpour would have been torture to His Grace if he was, indeed, in the grip of fatal hydrophobia when he reached the spot two centuries earlier.

But soon a low, intense afternoon sun was lighting a rainbow against the dark clouds south of the cairn, and casting a long, long shadow of the monument to the fallen duke.

Randy Boswell is a Carleton University journalism professor and a former Citizen and Postmedia News writer who specialized in Canadian history. He’s also a board member of the Historical Society of Ottawa.