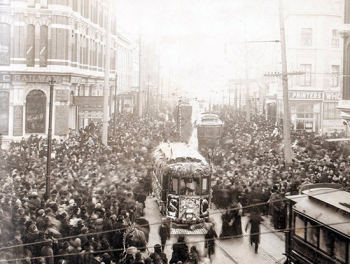 It’s hard sometimes not to get a little cynical about Christmas. Even before the last Halloween candy or pumpkin pie is consumed, it seems that stores have already put up the lights and tinsel of Christmas. Television advertisements urge us to buy things that neither we nor our family need. Christmas catalogues and store flyers clog our mailboxes, both real and virtual. Every shopping centre has its mall Santa, complete with faux ice palace, throne, green-clad helpers, and a posted list of times of when that jolly old elf dressed in red polyester and a fake white beard will be there to hear children’s wish lists. Christmas craft fairs and Santa Claus parades abound. For 2016, a local tourism site listed no less than seventeen Santa parades in the Ottawa area, most taking place in November to help rev up the Christmas spirit and encourage us to shop.

This is not to say the “good old days” were necessarily any less commercial. In the lead-up to Christmas 1896, Bryson, Graham Company, a large department store on Sparks Street, billed itself as the “Headquarters of Santa” and advertised “Special Xmas Offerings to the Little Folks.” For boys, these included small iron trains for 25 cents, fire ladder wagons with horse for $1.45, and tops, “some musical, some goers,” for 50 cents, as well as “spring guns, harmless pistols, and cannons.” (One hopes that the spring guns and cannons were also harmless.) For little girls, there were doll perambulators for 25 cents, and “very pretty” doll parlour suites for 15 cents or 25 cents. Games of all kinds, including Bagatelle [a forerunner of pinball], Parlour Croquet, and Go Bang [similar to Go], were also “expressly priced for Christmas.” The store also told shoppers not to forget while they were at the store to buy three dozen oranges or five pounds of candies for 25 cents. 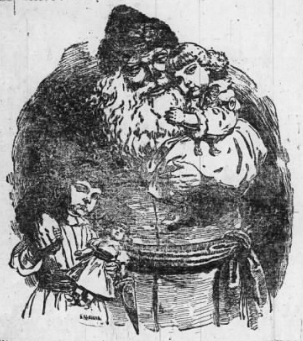 Santa Claus in the 1890s
The Ottawa Evening Journal, 21 December 1895John Murphy & Company, another big Ottawa retailer, urged “everyone to take a stroll round our store and see the sights of Xmas displays. Everything is looking marvellous.” It advertised “Christmas Dresses at Santa Claus’ prices.” For one day, full length dress robes were only $2.15. Best quality dresses were $3.00. Camel hair cloth was marked down to 50 cents a yard, from 75 cents, while brown and grey all wool homespun was reduced to 75 cents a yard from $1.25. On Christmas Eve, the store advertised a free bottle of perfume with every pair of kid gloves purchased. In the toy department, one thousand games were on sale at half price. While 40 extra staff had been hired for the day, it warned that “Christmas Buyers should do their shopping early” to avoid the rush and to get “better service and better suited.” Store hours were extended to 10pm for the convenience of shoppers, as well as, of course, to provide more opportunity for the store to pry hard-earned cash from the wallets and purses of Ottawa citizens.

Despite the commercialism of Christmas, then and now, once in a while something happens that restore one’s faith in the generosity of mankind, and the almighty dollar is pushed aside for a time. One such occasion occurred in 1896. Three days before Christmas, the Ottawa Evening Journal received a mysterious, little letter from Santa Claus. Dated the previous week from the North Pole, the letter read:

I have arranged to visit Ottawa on Thursday, the day before Christmas, and wish you would let all the little children know that I shall appear on the principal streets during Thursday afternoon on top of an electric [street]car.

Santa added that he would visit Sparks and other streets but would have to disappear by 4.30pm so that he could prepare for the visits he intended to make “that night to the homes of all Ottawa children who are good.” He closed by promising that he would telegraph ahead to tell people his progress on his trip south. The Daily Citizen remarked that Santa’s visit was not connected to any advertising scheme but was “simply the outcome of a desire upon the part of an Ottawa gentleman that the children of the city may see Santa in person.”

The following day, a second letter appeared. Writing from 31 Mile Lake, north east of Gracefield, Quebec, Santa announced his arrival in the region, saying that he would be in Ottawa the next afternoon.

I am bringing my best reindeer and will have him with me on top of a special electric car. I am also bringing with me a couple of thousand oranges and will distribute them from the car to the little boys and girls. 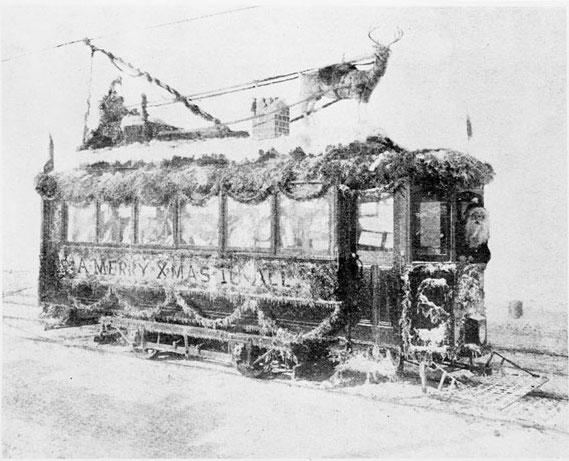 Santa Claus's Streetcar, 24 December 1896
Courtesy of the City of Ottawa Archives, RG045/CA001513He also announced his stops in the city, starting at 2.45pm at the corner of Sparks and Elgin Streets, followed by the corner of Rideau and Dalhousie at 3pm, corner of Queen Street West and Bridge Street, Chaudière, at 3.15 pm, corner of Richmond Road and Albert Street at 3.20 pm, corner of Bank and Maria [now Laurier Avenue] Streets at 3.35 pm and, finally, at the corner of Bank and Ann [now Gloucester Avenue] Streets at 3.45 pm. He would then return to the Post Office and immediately disappear. He apologized to the children of New Edinburgh that he was unable to make it to the town since his reindeer’s horns were so high he couldn’t take his car through the bridges. However, he promised to make his usual visits that night to the homes of all good boys and girls who have gone to bed early and were fast asleep. He asked grown-ups to tell their youngsters to look out for him on Thursday afternoon as it would be his only appearance in Ottawa.

The next day, Christmas Eve, Thursday, 24 December 1896, the excitement in the city was palpable. Thousands of people of all ages converged on the street corners where Santa Claus was scheduled to appear. They were not disappointed. The Ottawa Evening Journal noted that “the rules of etiquette, or whatever else is supposed to govern the movements of that most mysterious personage Santa Claus, and which from the oldest tradition led most individuals to believe that his visits are of a midnight nature, were rudely broken today.” Right on the scheduled time, Father Christmas arrived. “For convenience sake in transportation about the city streets,” his sleigh and reindeer were mounted on a streetcar of the Ottawa Electric Railway, which was decorated as a snow-covered cabin complete with chimney, and festooned with garlands. On its sides were signs reading “Merry Xmas To All.”

Santa himself was dressed in a fur cap and a long fur coat—very different from the red and white coated Saint Nick described in the classic Clement Clarke Moore poem ‘Twas the Night Before Christmas, and popularized by Coca Cola in its commercials. He did, however, have white whiskers, though press reports don’t mention if he also had “a little round belly that shook like a bowl full of jelly.”

Who was that Ottawa gentleman who brought Santa Claus to Ottawa for his first ever official visit to the nation’s capital (outside of his usual Christmas Eve tour of Ottawa rooftops, of course)? The answer was Warren Soper, the wealthy industrialist who, with his partner Thomas Ahearn, owned the city’s streetcar company, as well as other area businesses. Mobbed by adoring children, their parents and grandparents, Santa Claus handed out more than three thousand oranges to the city’s little boys and girls during his short stay. The Ottawa Evening Journal said that the visit was “quite the treat even for the grown people to see a real Santa Claus and such a good and generous one at that.”

The Daily Citizen opined that “No wretched doubter will ever again be able to hold his head in Ottawa and say that good, kindly Santy did not exist.”

Sadly, among the crowds of people that came out to meet the visitor from the North Pole, there was a grinch who stole $4 from the purse of poor Miss Scheik of 20 Keefer Street, New Edinburgh while she waited to see Santa at the corner of Dalhousie and Rideau Streets.