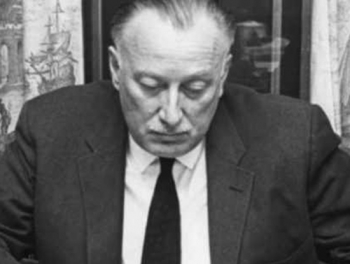 It would be hard to find a better demonstration of the adage that people who live in glass houses shouldn’t throw stones than the Gerda Munsinger case, a scandal that burst without warning onto the Ottawa political scene in early 1966. On 4 March, Lucien Cardin, the Justice Minister in Lester B. Pearson’s Liberal minority government, came under a blistering, personal attack by John G. Diefenbaker, the Progressive Conservative leader of the opposition. The object of Diefenbaker’s ire was the government’s handling of George Victor Spencer, a Vancouver postal clerk who had been fired from his job for selling information to the Russians. Two Soviet diplomats were expelled from Canada in the case. Spencer had provided names of dead people, bankrupt companies, and closed schools, which would have been useful in creating background cover stories for Russian agents based in the lower mainland area, as well as information about post office security. There was also evidence that the Russians were grooming Spencer to act as a “letter box” for passing on messages. In return, Spencer was paid several thousand dollars to meet with his Soviet handlers in Ottawa. He had also hoped to get a free ticket to visit Russia.

On that fateful March afternoon, Cardin was defending his department’s decision not to press criminal charges against Spencer. The opposition, sensing blood, demanded a formal inquiry to examine possible weaknesses in Canada’s security system, and to give Spencer, who had been fired without the right of appeal, an opportunity of a hearing. Cardin refused. Baited by Diefenbaker, Cardin lashed out saying that Diefenbaker was “the last person in the house to give advice on the handling of security cases in Canada.” He then added “I want the right hon. gentleman to tell the house about his participation in the Monseignor (sic) case when he was prime minister of this country.” His words caught people’s attention.

Prime Minister Pearson, who was in a weak political position, caved in to demands for an inquiry into the Spencer case. Overruled by Pearson, Cardin tendered his resignation from cabinet. But he almost immediately backtracked after receiving encouragement to stay on from his cabinet colleagues and the Quebec caucus of the Liberal Party. With rumours swirling in Ottawa about Cardin’s future, and a new security scandal, Cardin called a press conference where he acknowledged his aborted resignation over the Spencer file. He also reiterated what he said in the House of Commons, and provided startling new details. This time he got the name right. He claimed that a former Soviet spy named Gerda Munsinger had been involved with two or more Conservative Cabinet ministers during the Diefenbaker years. He claimed that the affair was worse that the Profumo case in Britain. (In 1961, John Profumo, the Secretary of State for War, resigned his cabinet position and his parliamentary seat after admitting to having had an affair with a young woman, Christine Keeler, who allegedly was also sleeping with the Soviet naval attaché in London.) Cardin also claimed that Diefenbaker and David Fulton, who was Justice Minister at the time, had known that cabinet ministers were involved with Munsinger, but did nothing, despite the evident security risks. He added that he believed Munsinger had died of leukemia.

Gerda Munsinger, circa 1966, the "Mata Hari" of the Cold WarCardin’s sensational allegations rocked the House of Commons. Normal business came to abrupt halt. Outraged Conservative MPs demanded that Cardin reveal the names of the former ministers, or resign. In turn, Prime Minister Pearson announced a judicial inquiry into the affair, and challenged the opposition to defeat his government.

Toronto Star journalist Robert Reguly tracked down a very much alive Gerda Munsinger in Munich, Germany, and got an exclusive interview with her. She readily admitted her involvement with Conservative cabinet ministers. Quickly, details of Munsinger’s life, and who she had been dating, were circulating in the press.

She was born Gerda Heseler in Königsberg, East Prussia in 1929, which became Kaliningrad, after the war when the Soviet Union expelled its German inhabitants, and annexed the city. In 1952, she married Michael Munsinger, a U.S. serviceman stationed in Germany. But when the couple subsequently tried to move to the United States, Gerda Munsinger was denied entry on security grounds; she had a record of petty theft and prostitution in West Germany. As well, she had apparently admitted to having had a relationship with a Soviet KGB agent, and of having worked as a low-level Soviet spy. Their marriage was annulled. Later in 1952, Gerda Munsinger tried to immigrate to Canada under her maiden name, but was rejected on security grounds. She tried again in 1955, using her married name. This time, she was successful. Settling in Montreal, the aspiring model worked in various nightclubs connected with Montreal mobsters as a cashier or hostess. Allegedly, she was also a sometime prostitute.

In August 1959, she was introduced to Pierre Sévigny, the Associate Minister for Defence in Diefenbaker’s Conservative government. Sévigny was a much decorated veteran of World War II, who had lost a leg at the battle of the Rhineland. Their relationship became intimate. She was also introduced to George Hees, Minister for Trade and Commerce, and dined with him on several occasions. In late 1960, Munsinger applied with Sévigny’s help for a Canadian passport. Through their passport vetting process, the RCMP discovered that she had been denied entry into Canada eight years earlier. After placing Munsinger under surveillance, which included a wiretap, they discovered she was Sévigny’s “mistress.” The RCMP briefed David Fulton who informed the prime minister. Diefenbaker told Sévigny to break off the relationship. This he did, a decision made easier by Munsinger’s decision to return to Germany in early 1961. No further action was taken. Sévigny remained in his cabinet post as Associate Minister for National Defence until his resignation in 1963. Diefenbaker and Fulton kept the RCMP file confidential; other members of the cabinet were not informed.

When Sévigny’s name was publicly linked to that of Munsinger, the former minister went on the offensive. Appearing on CBC television, flanked by his wife and daughter, Sévigny admitted to having met Gerda Munsinger at a party in August 1959, and afterwards seeing her a few times socially, but their relationship was “just that, a social one.” He said he never had any reason to think she was a foreign agent, and was convinced that she never presented a security risk. He called Cardin “a despicable, rotten, little politician.”

Two months later, Justice Spence gave his report on the Munsinger affair. It was devastating. While there was no evidence to suggest that Munsinger had worked as a spy in Canada, Justice Spence tore into the previous Conservative government’s handling of the case. While commending Fulton for bringing the RCMP brief on Munsinger promptly to the prime minister’s attention, he faulted him for not initiating a full investigation into whether there had been a security breach. One of the issues not investigated was the arrest and release of Munsinger for bouncing cheques in Montreal shops immediately before her return to Germany. Reportedly, Montreal police had been subjected to political pressure to release Munsinger, and were told that, if charges were pressed, a prominent politician would be blackmailed.

Diefenbaker, who refused to testify at the inquiry, came out very badly. Justice Spence argued that Diefenbaker had relied solely on his personal assessment of Sévigny’s character to retain him in cabinet. Had he read the background documents that supported the RCMP brief, Spence said that Diefenbaker would have clearly seen that Sévigny “was not telling the whole truth.” Moreover, Sévigny’s relationship with Munsinger was known by persons “said to be of unsavory reputation,” and had Diefenbaker done a bit of research “the danger of blackmail and improper pressure would have been revealed as startling.” He also chastised the former prime minister for not bringing the issue to his cabinet for discussion, and especially for not informing Douglas Harkness, the senior cabinet minister for national defence, as well as George Hees, who knew Munsinger on a casual basis, of the RCMP investigation. He also argued that if Diefenbaker had, despite everything, wanted to retain Sévigny in cabinet, he should have moved him to a less sensitive portfolio.

Justice Spence concluded that Pierre Sévigny had understated the closeness and the extent of his relationship with Gerda Munsinger, both to Diefenbaker and to the inquiry. While it had been argued that Sévigny’s strength of character was such that he could not have been pressured or blackmailed, Spence noted that Sévigny had not exhibited “such sterling qualities” on the one instance of pressure—when Diefenbaker confronted him about Munsinger. In addition, despite vague denials, there was no question that he had “actively used his influence to try to obtain Canadian citizenship for Mrs Munsinger.”

Finally, Justice Spence stated that all the allegations made by Lucien Cardin at his March press conference were true. Importantly, there were indeed aspects of the case that were worse than the Profumo affair in Britain. There, the cabinet minister in question had resigned his position and had apologized to Parliament. Sévigny had done neither.

One thing that Justice Spence did not comment on was why the Pearson government had taken so long to initiate an inquiry. Pearson had been informed of the Munsinger case almost two years previously. Consequently, was Cardin’s revelation in the House on 4 March 1966 a slip of the tongue, made while under pressure, or was it something planned to divert attention away from a weak, minority government assailed on many fronts? Fulton called the Spence report “one man’s opinion,” while Diefenbaker called it “the shabby device of a political trial.”

Pierre Sévigny never apologized for his actions. He believed “the scandal was built up out of nothing” by senior people in the Liberal Party. He claimed that he was “framed,” and that the scandal was use to cover up greater misdeeds. He saw himself as “the victim.” He died in 2004.

Gerda Munsinger, the woman at the centre of the affair, remarried after the Spence inquiry. She died in 1998.