Some Chicken! Some Neck! 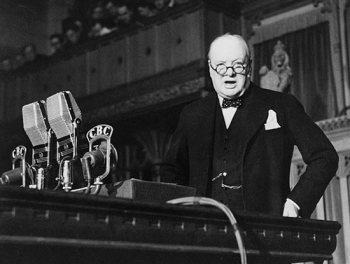 Churchill Speaking in the House of Commons, Otttawa, 30 December 1941

News that Japan had attacked and destroyed much of the U.S. Pacific Fleet stationed at Pearl Harbor in early December 1941 simultaneously appalled and elated British Prime Minister Winston Churchill. While disheartened by the destruction and loss of life, he was overjoyed that the sleeping American giant was finally fully awake to the global threat posed by the Axis Powers. With the English-speaking peoples of the world now united against the common foe, Churchill was convinced that eventual victory was assured.

Churchill immediately made plans to go to the United States to confer with his new war ally, President Franklin Roosevelt. Initially, Roosevelt advised Churchill against the trip, citing the enormous risks of crossing the U-boat infested, North Atlantic, as well as domestic American political reasons; he was unsure of Churchill’s reception. But there was no dissuading the redoubtable British Prime Minister. Accompanied by staff and senior military leaders, he arrived on American soil on 22 December, just two weeks after the Pearl Harbor attack, having journeyed to North America on the newly-commissioned battleship HMS Duke of York. The perilous journey took ten days. Churchill spent much of the next four weeks a guest of the Roosevelts’ at the White House. In so doing, a close, personal bond was established between the two leaders. After spending Christmas Day with the Roosevelt family, Churchill addressed the joint Houses of Congress on Boxing Day. At the Senate rostrum, Churchill reminded his audience, and the American people who were listening to his speech by radio, that he was half American himself, and, but for a quirk of fate, he might have had a seat there instead of the House of Commons in London. He also warned his audience not to understate the severity of the ordeal they faced. He predicted dark days to come in 1942, but was confident in their ultimate success. Churchill’s frankness, and boundless enthusiasm, charmed U.S. lawmakers, who gave him a thunderous ovation.

While the prime reason for his trip to North America was to woo the United States, and to coordinate the next steps in the Allied military campaign, Churchill made a two-day side journey to Canada. With the American trip off to an excellent start, Churchill felt that he was able to accept an invitation from Canada’s Governor General, the Earl of Athlone, and Prime Minister Mackenzie King to visit Ottawa. The trip was a “thank-you” to the Dominion for the significant contribution the country had made to the war effort in the form of manpower, materials, food, and money.

For obvious security reasons, Churchill’s visit to Canada was kept top secret until only shortly before his arrival in Ottawa. But when the news broke, a wave of excitement gripped the nation’s capital. Flags and bunting quickly appeared on the city’s buildings and telephone poles. At shortly after 10am on Monday, 29 December, Winston Churchill arrived at Ottawa’s Union Station on President Roosevelt’s luxurious, bullet-proof, personal train, complete with the President’s personal valet, chef, and body guards. Also on board was Canadian Prime Minister Mackenzie King, who had travelled down to Washington on Christmas Day to confer with American and British officials, and to witness first hand Churchill’s historic address to the U.S. Congress.

Despite the cold and a light snow falling, twenty thousand people filled the streets around Ottawa’s Union Station to catch a glimpse of Churchill. The official welcoming committee consisted of representatives of the Governor General, Cabinet Ministers, Senators, Members of Parliament, heads of diplomatic corps resident in Ottawa, and Mayor Stanley Lewis. As the train backed into the station, the British Prime Minister stood at the end-car platform, wearing a dark overcoat and a dark blue muffler, with a heavy walking stick in hand, and his characteristic cigar clenched between his teeth. He greeted the crowd’s welcoming cheers with broad smiles, waves of his hat, and his famous “V” for Victory sign. On exiting the train, Churchill was swamped by enthusiastic citizens who had burst through the police cordon as he made his way to the official car. Apparently, he was forced to use his elbows to reach the car, though he took all the jostling in good humour.

Churchill was driven from Union Station to Rideau Hall, the residence of the Governor General, with whom Churchill would be staying on his short visit to Ottawa. Along the processional route, which took his motorcade down Nicholas Street, the Laurier Avenue Bridge, Mackenzie Avenue, Lady Jane Drive, and Sussex Avenue, thousands of Ottawa citizens cheered themselves hoarse. People clambered on top of cars to get a good view of their wartime hero who had sustained an Empire through more than two desperate years of war. Office windows on the route were jammed with spectators. Security was provided by scores of RCMP and Ottawa police both in uniform and in plain clothes.

Newspaper accounts commented that Churchill had been accompanied to Ottawa by Sir Charles Wilson, the prime minister’s personal physician. The Ottawa Citizen pointed out that Wilson’s presence signified nothing; it was “not that Mr. Churchill is in the least need of medical attention.” On the contrary, the paper said that the 66-year old British Prime Minister was “fighting fit,” looked younger than expected, and there was “no evidence of fatigue, nothing to indicate that the weight of his responsibilities is proving too much for him.” In reality, that assessment was far from the truth. Years later, it was revealed the night after his triumphant Congressional speech, just two days before leaving for Ottawa, Churchill experienced a gripping pressure in his chest, with pain radiating down his left arm. Wilson recognized the symptoms of a heart attack, but said nothing, telling Churchill that he had simply overdone things. Fortunately, for Churchill and the entire world, the symptoms eased, and the British Prime Minister continued with his gruelling schedule without further incident.

The following afternoon, Churchill was taken in procession to Parliament Hill to address a joint session of the Senate and House of Commons. As Parliament was officially in recess, members were recalled for Churchill’s speech. Before entering the Centre Block, Churchill inspected a guard of honour consisting of personnel from the Royal Canadian Naval Volunteers, RCAF, and cadets from the Canadian Officers’ Training Centre in Brockville. In charge of the guard was Major Alexandre Dugas of the Maisoneuve Regiment, recently returned from Britain. Again, the British leader was given a huge welcome by the many thousands of Ottawa citizens. To their cheers, Churchill got out of his car, and raised his hat in acknowledgement.

Inside, the House of Commons was packed. Almost 2,000 people, including MPs, Senators, privy councillors, provincial premiers, judges, clergy, high-ranking military leaders, and heads of Commonwealth and foreign delegations, sat on the parliamentary benches and on temporary seats set up on the Commons’ floor. The galleries too were packed with humanity, including a virtual army of photographers and movie cameramen there to record the historic proceedings.

At 3pm, Churchill took his seat to the right of the Commons Speaker, the Hon. James A. Glenn; the Senate Speaker, the Hon. Georges Parent, sat on Glenn’s left. Churchill’s arrival was the signal for minutes of near-frantic cheering from the assembled multitude. After the words of welcome, Churchill rose and strode over to the end of the table nearest the Speaker’s chair, where a bank of microphones had been set up. When silence was restored, Churchill addressed the throng, his words transmitted live over CBC radio, and to the crowds outside on Parliament Hill over a loudspeaker system. In his speech, one of his most memorable, Churchill thanked the Canadian people for all they have done in the “common cause.” He also said the allies were dedicated to “the total and final extirpation of the Hitler tyranny, the Japanese frenzy, and the Mussolini flop.” Alluding to defeatist comments made by French generals who in 1940 had said that in three weeks England would have her neck rung like a chicken, Churchill famously said “Some Chicken! Some Neck!” Simple words, but ones that captured the resolve of a people to fight on to victory. The House erupted into cheers.

After his speech, Churchill retired to the Speaker’s chambers. There, Yousef Karsh, the photographer, persuaded the British leader to pose for an official portrait. Churchill gruffly agreed, giving him five minutes. When Karsh took Churchill’s iconic cigar out of his mouth, Churchill glowered. Karsh immediately snapped a picture, capturing the pugnacious pose that became symbolic of British resistance to Nazi aggression. (See Karsh photograph.) Karsh later said “By the time I got back to my camera, he looked so belligerent, he could have devoured me.” The photograph made Karsh internationally famous. Mackenzie King was so delighted with the photograph that he sent three copies to Churchill.

The next day, Churchill returned to the United States for more talks with President Roosevelt and U.S. political and military officials, as well as for a short, but much needed, holiday in Florida. On 16 January 1942, Churchill finally left America on a Boeing 314 Flying Boat called the Berwick, departing from Virginia to Bermuda. The intrepid leader took the controls of the plane and flew it for part of the journey. Arriving in Bermuda, he had been scheduled to rendez-vous with the battleship Duke of York for the remainder of the trip back to the United Kingdom. However, advised that the weather was favourable, and eager to get back home after being away for more than a month, he continued his journey to Britain by plane—an audacious undertaking; transatlantic air travel was still in its infancy. While the flight itself was largely uneventful, disaster was narrowly averted when the airplane accidently flew within five minutes of the coast of occupied France. When a course correction was finally made, the flying boat, now headed north to Plymouth Harbour, was identified by British coastal defences as a German bomber. Six Hurricane fighters were sent to intercept the airplane and shoot it down. Thankfully, they were unable to locate it. As Churchill laconically put it “They failed in their mission.”

Churchill returned to Canada in late 1943 to confer once again with President Roosevelt and Prime Minister Mackenzie King. By then, the tide of war had finally turned. Instead of focusing on how best to resist the Axis onslaught, the leaders, at La Citadelle in Quebec City, plotted the invasion of Nazi-occupied France.

Cobb, Chris, 2011. Winston Churchill 70 Years Ago: “Some Chicken! Some Neck!” The Churchill Centre.