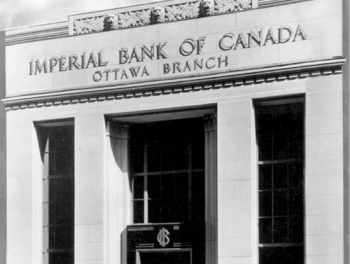 When Mr W.W. Pegg, manager of the Imperial Bank of Canada’s main Ottawa branch at 62 Sparks Street, arrived at work on Monday, 27 October 1958, he had no idea that he was about to experience the worst day of his long and successful career. Entering the classic, Temple-style, granite and sandstone building, his thoughts must have undoubtedly been on the Slater Street gas main explosion that had rocked Ottawa’s downtown core just two days earlier, injuring scores, demolishing buildings, and shattering store fronts and glass windows in a several block area from Sparks Street to Somerset Street. But on opening the bank’s vault for the start of the day’s business, all thoughts about the explosion would have been forgotten by the sight that confronted him, or, more correctly by what he didn’t see. The cash reserves of the bank were gone. Also missing, were funds transferred to his branch from smaller Imperial bank branches across the city the previous week. How the audacious theft was committed was not immediately apparent. There was no signs of forced entry. It took head office auditors days to determine the precise amount of the shortfall—an astonishing $260,958 (equivalent to $2.2 million today), the largest theft ever from an Ottawa bank.

Suspicion immediately fell on Boyne Lester Johnson, Pegg’s 27-year old, trusted, chief teller. Johnson, a Renfrew native, was a seven-year veteran of the Imperial Bank, having joined the financial institution out of high school. Among his duties were handling the cash deposits brought in from other Imperial branches. Consequently, a large volume of money routinely passed through his hands. Although everything had appeared normal when he had left work with other bank employees the previous Friday, he had failed to show up Monday morning.

When police arrived at Johnson’s home, apartment #20 at 350 Chapel Street in Sandy Hill, there was no sign of him, or his wife Bernice. A search revealed a large sum of cash though there was no way of knowing whether the money was part of the missing bank funds; the bank had no record of the serial numbers of the stolen notes. The Johnsons’ family car was in the basement parking lot, a .22 calibre hunting rifle, hunting clothes, and maps were found in its trunk. The building’s caretaker told the police that he had last seen Boyne Johnson on Sunday morning when the young man had awoken him at 8.30am to ask to be let into his apartment. Johnson had told him that he had forgotten his key after going to church with his wife. The superintendent thought this was odd as Boyne was dressed in old clothes rather than his Sunday best. Police immediately issued a warrant for his arrest, alerting law enforcement agencies across the country, as well as the FBI in the United States. Rail stations, airports, car rental agencies, and customs posts were also advised to be on the watch for Boyne Lester Johnson. 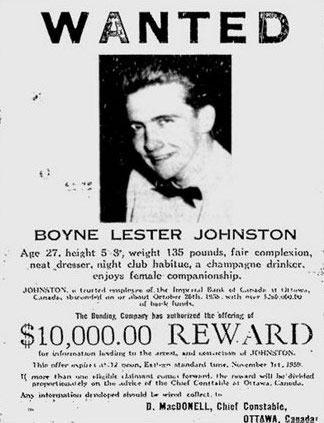 Johnson Wanted Poster released by Ottawa Police and circulated throughout North AmericaWhile Ottawa police were trying to track down Boyne, Bernice Johnson was becoming frantic with worry. On the Saturday, the couple had driven to Renfrew to visit their mothers, Mrs Mary Johnson and Mrs Julia Narlock who lived in the town. They had supper that evening with the two parents in a Cobden restaurant. Everything seemed normal. The couple spent the night at the home of Bernice’s mother. The next day, Boyne had risen early, telling his wife that he was going hunting close to the Renfrew golf course. She last saw him at 6.30 Sunday morning. He never returned. On Monday morning, she and a friend began searching the Renfrew area for her missing husband. Having no luck, and fearing that some serious had happened to him, she turned to the Renfrew police department for assistance. She was shocked to find out that her husband had become the subject of a nation-wide alert.

Johnson’s trail went cold. There were few clues to his whereabouts. Police speculated that he was still in the vicinity, but admitted they really didn’t know. To help their inquiries, the Ottawa police and RCMP issued a detailed “wanted” poster with a $10,000 reward for information leading to his arrest and conviction. He was described as age 27, height 5’ 8,” weight 135 pounds, with a fair complexion. Also noted was that he was a neat dresser, frequented night clubs, and had a penchant for champagne and the ladies. The poster went out to police stations and post offices across North America. Tips started to come in. A Trans-Canada Airways (TCA) stewardess thought she had spotted Johnson on a flight from Ottawa to Montreal. On 5 November, Montreal police were sent “scurrying” on receiving a phone call from a man who identified himself as Inspector Osborne, a vacationing Ontario Provincial policeman. He called Montreal police headquarters telling them that he had captured Johnson, and sought aid to bring him in. He also claimed to have the money in an airline carry-on bag. It was a hoax. No Inspector Osborne worked for the OPP.

The big break came on Monday, 10 November when Geneva Flowers, a waitress at Chez Paree, a Denver, Colorado night club, recognized Johnson from his wanted poster shown to her by a friend in the Denver police department. Another server, Ormonde Wynn, had spotted Johnson sipping champagne sitting at the bar. The Denver police were called, arresting Johnson without a fuss. He took the policemen to his YMCA room where they found a suitcase crammed with more than $233,000 in mostly Canadian cash. He also told them that on arriving in Denver he had bought a $4,150 sports car, and had planned to go skiing in the mountains. He said that he always wanted to know what it was like to have lots of money. He admitted that he knew he would eventually be caught, and was glad it was all over. He had wanted to experience the “have fun while you can principle.” Denver policemen said that the highly detailed wanted poster circulated by Canadian police that had highlighted Johnson’s love of champagne was responsible for his capture.

Under police questioning, Johnson freely explained how he robbed the bank, and his movements over the previous two weeks. Through the day on Friday, 24 October, he had removed cash from the vault, secreting the money in accessible spots around the bank. At some point, exactly when is not clear, he converted $7,000 into U.S. currency at another Ottawa bank. That night, he returned to the Imperial Bank’s Sparks Street branch, letting himself in using the key with which he had been entrusted as chief teller. He then retrieved the money from their caches, filled a suitcase, and left via a rear laneway exit to his car. There were no witnesses. Returning home with the suitcase in the trunk, he calmly drove with his wife to Renfrew the following day, the suitcase still in the back of the car. On Sunday morning, instead of hunting, he returned to Ottawa, stopping off at his apartment, where he left some money for his wife. He then flew to Windsor, Ontario. At the Windsor airport, he stored the cash-stuffed suitcase in a locker, and took a taxi to the Detroit airport. Pretending to have accidently forgotten his suitcase, he persuaded a Detroit taxi driver to go to the Windsor airport and fetch it for him. Incredibly, the driver agreed to do so, passing through US customs without incident. Johnson gave him a $20 tip for his trouble. From Detroit, he flew to Los Angeles, before going to Salt Lake City, Twin Falls, Idaho, Cheyenne Wisconsin, and finally Denver, where the law finally caught up with him. While in Cheyenne, Johnson, feeling blue, had telephoned a friend, Gerald Cotie, the third assistant accountant at the Imperial Bank branch. Cotie had urged Johnson to give himself up, but without success.

With Johnson waiving an extradition hearing, two Ottawa police officers, Inspector Ab Cavan and Detective Gordon Lowry, went to Denver on November 11 to officially identify him, and to return him to Ottawa. With a stop at Malton Airport in Toronto, Johnson arrived at Uplands Airport, Ottawa, accompanied by the two officers, on a regular TCA flight, at shortly before 10pm on 14 November, three weeks after the heist. On arriving in the city, he politely thanked the two detectives. Wearing a suede windbreaker, dark grey trousers, and running shoes, Johnson walked briskly down the steps to be greeted by flashing light bulbs and television cameras. More than 300 spectators were on hand to meet his plane. When asked why he did it by a Citizen reporter, Johnson replied “It’s hard to explain. I guess it was the climax to a lot of personal trouble.” He also told journalists that “It’s nice to have met you. But when you write this, don’t say ‘Go west, young man!’ It just doesn’t work out.”

On the following Monday, he was officially charged, and was remanded into custody by Magistrate Glenn E. Strike. No plea was entered, and no bail was set. In the crowded court room was his wife, Bernice. Johnson, who did not speak at the hearing, was represented by John Dunlop; James Maloney, QC, Member of Parliament for Renfrew, was retained as Johnson’s defence counsel. A month later, Johnson plead guilty, and was convicted. In court, it was revealed that all $260,958 that he had stolen from the Imperial Bank had been returned. The bulk of the money was discovered by Denver police in Johnson’s YMCA room. A further $5,000 was recovered from his Chapel Street apartment. He had spent only $12,050. Johnson’s father, Hartzell Johnson, made up the shortfall. His father also told the judge that he was planning to start a business in another city, and would offer Boyne a job on his release from jail. Wife Bernice also said she would stand by her man, and wait for him.

During his short hearing, police officers testified that Boyne had been “a model prisoner,” and it seemed that “he was glad to have been caught.” One testified that Johnson seemed to have been trying to run away from himself. Defence counsel argued that Johnson was “not really a criminal.” The prosecuting Crown attorney, Raoul Mercier, countered that it was important for society to be protected from thefts by trusted employees.

On Thursday 18 December, in front of several Johnson family members, Judge Strike pronounced sentence. The magistrate said that he had little sympathy for Boyne. His was a very serious crime involving a very large sum of money, and that Boyne had been disloyal to both his employer and his family. A pale but composed Boyne Johnson received his sentence—four years in the Kingston Penitentiary.