Yet More on Gouzenko - The Red Menace 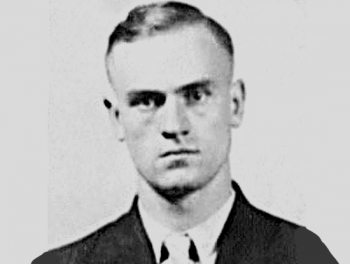 On Wednesday evening, 5 September 1945, Igor Gouzenko, a cipher clerk from the Soviet Embassy in Ottawa, defected, or at least tried to defect as it took him almost two days to convince anybody that he was serious. He first showed up at the office of the Ottawa Journal with secret documents that he had smuggled out of the embassy. But the city editor was busy and told Gouzenko to come back the following day. He then tried the office of Louis St. Laurent, then the Minister of Justice. But the minister and his staff had long gone home for the night. Again, Gouzenko was told to return in the morning. After going back to the Journal for another fruitless attempt to attract somebody’s attention, Gouzenko returned to his Somerset St apartment building. Terrified that he was being followed by Soviet operatives, Gouzenko, his wife and young child, took shelter with a neighbour. This was a wise decision as later that night members of the Soviet Embassy broke down the front door of their apartment looking for them.

Fortunately, the break-in brought Gouzenko to the attention of the Ottawa police who asked for guidance from the RCMP. The Mounties called Norman Robertson, the Undersecretary of State for External Affairs, who in turn conferred with Sir William Stephenson, the diminutive, Canadian-born, British spy chief, code-named “Intrepid.” Gouzenko and his family were finally “brought in from the cold” on Friday, 7 September and whisked away to a secret location outside of Oshawa for debriefing. The documents he brought with him were breathtaking. They provided details of a Soviet spy ring in Canada. Its objective was to obtain intelligence about the U.S. atomic bomb which the Americans had just dropped on the Japanese cities of Hiroshima and Nagasaki.

Ottawa was an ideal locale for spies. Its National Research Council was a major weapons research centre during the war. Its scientists, along with their British and U.S. counterparts, worked on “the bomb” in secret laboratories at the University of Montreal. Canada was also the source of the uranium fuel for the weapon, and had built a top-secret nuclear reactor at Chalk River, a tiny community 180 kilometres northwest of Ottawa.

The reasons for Gouzenko’s defection were straightforward. He had been a committed Stalinist when he had arrived in Canada via Siberia in 1943. Although living conditions in the Soviet Union were difficult, he had been told that conditions were worse in the capitalist countries. However, he was shocked to discover Canadian stores stocked with goods that Soviet citizens could only dream of. Ordinary Canadian workers lived in their own houses and drove cars, unthinkable in Soviet Russia. He was also dumbstruck that people freely spoke their minds about their government without fear of arrest. After two years in Ottawa, he could not face returning to the Soviet Union.

The Canadian government’s initial response to Gouzenko’s defection was lukewarm owing to fears about upsetting the Soviets, key wartime allies. Prime Minister Mackenzie King did, however, personally inform U.S. President Truman and British Prime Minister Attlee of Gouzenko’s defection and the contents of the documents that he had brought with him. But the news was kept under wraps for months.

Rumours of a Soviet spy ring operating in Canada began to circulate in the United States on 4 February 1946. With the news about to break, King briefed his Cabinet the following day and established a Royal Commission headed by two Supreme Court Justices, Roy Kellock and Robert Taschereau, to examine the evidence and allegations made by Gouzenko. The Commission immediately began secret hearings. On 15 February, the RCMP arrested thirteen men and women named in the Soviet documents. More arrests were to follow. Later that day, the government made an official announcement to the public. Still protective of Soviet feelings, it did not mention the Soviet Union by name, saying only that secret and confidential information had been disclosed to “some members on the staff of a foreign mission in Ottawa.”

The news burst like a bombshell. The Globe and Mail’s headline the next day screamed “Atom Secret Leaks to Soviet, Canadians Suspected.” Canadian public opinion which had been very favourable towards the Soviet Union because of its role in defeating Hitler swung sharply negative. On the basis of documents and testimony gathered by the Royal Commission, twenty-three persons who mostly worked for the military, government, or Crown agencies were arrested. Eleven were subsequently found guilty of spying, including Fred Rose, the communist Member of Parliament for the Montreal riding of Cartier. He was expelled from Parliament in 1947 and sentenced to six years in prison. Allan Nunn May, a British physicist working on the bomb project in Montreal, was tried in the United Kingdom and received a sentence of ten years hard labour. Several others also received prison terms. However, courts later dismissed charges against more than half of those publicly accused by the Commission. Several had only been members of study groups, a popular activity in wartime Ottawa, which had discussed Marxism and other left-wing subjects.

The King Government’s handling of Gouzenko’s defection marked a low point for Canadian civil liberties. Suspected spies were arrested on the basis of a secret order-in-council. Their basic right of habeas corpus were suspended. Suspects were held indefinitely without legal council and without a court able to challenge their detention. Justices Kellock and Taschereau were harsh with witnesses. At times, they seemed to forget that their mission was to collect the facts and not to be judge and jury. The accusations they publicly levelled against many who were later exonerated ruined reputations and destroyed careers.

The Gouzenko affair marked the beginning of the Cold War between the Soviet Union and the Western democracies that was to last until the fall of the Berlin War in 1989. News of Soviet spies in North America fuelled growing U.S. anxieties about Soviet activities at a time when the Russians were consolidating their grip on Eastern Europe. On 5 March 1946, three weeks after the Gouzenko affair became public, Winston Churchill famously said that “an iron curtain has descended across the Continent.” Also that year, Joe McCarthy was elected junior senator for Wisconsin. In 1950, he catapulted to infamy with his unsubstantiated claim of hundreds of communists working in the U.S. federal bureaucracy. The communist witch-hunts subsequently orchestrated by the U.S. House Committee on Un-American Activities blighted countless lives. We now have a word for this—McCarthyism. And it all began that warm September evening in Ottawa.

——————, 2004. “It is Not the Beliefs but the Crime that Matters: Post-War Civil Liberties Debates in Canada and Australia,” Australian Society for the Study of Labour History, No. 86, May.

Retired from the Bank of Canada, James is the author or co-author of three books dealing with some aspect of Canadian history. These comprise: A History of the Canadian Dollar, 2005, Bank of Canada, The Bank of Canada of James Elliott Coyne: Challenges, Confrontation and Change,” 2009, Queen’s University Press, and with Jill Moxley, Faking It! A History of Counterfeiting in Canada, 2013, General Store Publishing House, Renfrew, Ontario. James is a Director of The Historical Society of Ottawa.
Published in Personalities: Very Famous to the Lesser Known
back to top