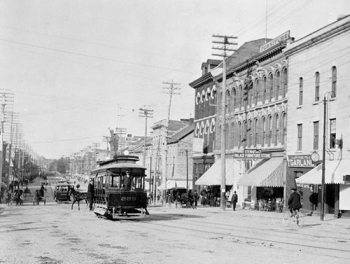 With all the growth in our City in the past fifty years, I wonder how many people remember the days when you could take a streetcar from, among other routes, from the old train station out to Rideau and Charlotte? Thanks to Professor Don Davis of the University of Ottawa we have a detailed history of the streetcar system and how it grew and how it was eventually done away with! (see Keshen and St. Onge eds, Ottawa—Making a Capital).

Ottawa's street railway system died in 1959 after a life of 68 years. Did citizens love or hate the system? Davis notes that the love of the system was like some marriages—initial great enthusiasm followed by many years of declining interest in our rapidly changing technological world. Perhaps the streetcar era has lessons to teach in the consideration of expanded light rail?

The new streetcar system was opened on June 29, 1891—largely as a result of the work of two local entrepreneurs, Thomas Ahearn and Warren Soper. Everyone thought that such a project would fail because of Ottawa's winters. However, at the time, unless you could afford a horse and buggy plus sleigh in the winter, there was no way to get around the growing city except by walking. The system proved to be an immediate success, even in the winter. The system had the first electrically heated cars in Canada, maybe even the world. The Ottawa Car Manufacturing Company made streetcars that were exported to other parts of Canada. In the early days of the system, “ridership” rose seven times faster than the population. In 1921 at the peak of the system. Each citizen took an average of 336 rides per year. The fares were low—about three tickets for ten cents Despite attempts at updating and revival, Ottawa's Street Railway went steadily downhill from this point....

Public love for the automobile was probably a contributing factor, as was the rising costs of maintenance, expanding the roadbed and new streetcar technology The investors also played a part as they took an increasing amount of dividends out of the system and did not develop a good reserve fund for necessary expansion and repairs. By 1924, the automobile was using up the space needed for transit cars.. They blocked the progress of streetcars by parking on city streets, forcing other cars to drive on the track allowance and stopping to pick up passengers and make left turns. Streetcar trips became longer. Davis points out that “trains in 1956 were slower than they had been in 1901. Downtown it was faster to walk”.

Having made money for years, the owners of the OER now wanted to sell the system to the city. While the City Council was willing to buy, assuming they would have a monopoly on inner city transit. But, over a five year period to 1929, plebiscites were rejected four times. The taxpayers did not want to pay. In January, 1924, the City and the OER reached an agreement to extend the service and monopoly for five years, subject to renewal in 1929. This agreement created more problems than it solved. First, the carfare was frozen at five cents per ride, lower than nearly all other North American systems, and the five year term was not conducive to the kind of capital investment that was becoming increasingly necessary. Thanks to the increasing competition from the automobile, streets became even more clogged and streetcar trips ever longer. In 1929, it was apparent that new equipment was necessary, and the five year contract emboldened the owners to buy new equipment with borrowed money. Contracts were let and then came October 1929. Pressure for loan payment became intense but the fare was still frozen at five cents. When authority was finally obtained to raise the fare to seven cents, “ridership” dropped by 16%, despite a revenue increase of 10%. The OER staggered on until the end of World War 2, but the handwriting was on the wall revenues could never match increasing costs of new equipment, track extensions, competition from the auto and pressures from various interest groups. For example, Glebe residents would not permit streetcar routes along residential streets, The forerunners of the NCC did not want unsightly power lines overhead and riders demanded more comfortable and frequent service The federal government increased business taxes enormously during the War. Trams were crowded and noisy—people preferred buses before the environmental effects of buses were discovered. Despite the eventual creation of the Ottawa Transit Commission in. 1947/48 these questions continued and new ones arose. It was obvious—too many groups wanted the tram lines to disappear. By 1958/59 the pressures became too much and the old streetcar lines were removed. The only mourners at the time were the older population who had fond memories of the great days before and during the First World War.