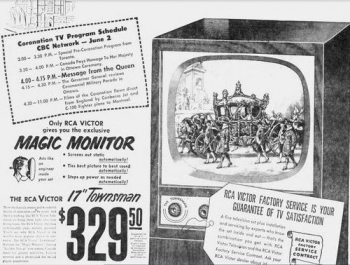 By the late 1930s, commercial television broadcasting was ready for “prime time” after years of experimentation, first with mechanical systems and later with electronic systems. The British Broadcasting Corporation (BBC) is credited with the first “high-definition” television broadcast when it began regularly scheduled transmissions in late 1936 from its studios at the Alexandra Palace in London using Marconi-EMI’s fully electronic system. “High definition” in this context should not to be confused with today’s high-definition television.  The BBC was broadcasting with just 405 lines of resolution, much less than the 720-1,080 lines considered to be high definition today. Its broadcast resolution was, however, far superior to that of earlier broadcasting systems that had resolutions ranging from roughly 30 to 204 lines. The BBC station’s range was officially only forty kilometres, though unofficially it could reach much farther depending on atmospheric conditions. BBC television quickly became a big hit; the hot, new gift in London during the 1937 Christmas season was the television set. Some 10,000 receivers were sold. But progress came to a halt at the outbreak of World War II when the BBC suspended its broadcasts owing to fears that German bombers could use its signal to home in onto London. BBC technicians were also needed elsewhere to support the war effort.

In North America, experimentation also went into high gear during the 1930s. The Canadian experimental station VE9EC, owned by La Presse and CKAC radio in Montreal, broadcasted during the early years of the decade using mechanical systems with 60-150 lines of resolution. In the United States, a number of competing broadcasting systems were also being tested and perfected. The Radio Corporation of America (RCA) began regular experimental television broadcasts in New York City in the spring of 1939, transmitting monochrome (i.e., black and white) programmes from the top of the Empire State Building. RCA’s television subsidiary became the National Broadcasting Corporation (NBC). That same year, RCA began to ramp up its production of television receivers for sale to the general public. RCA also demonstrated the television at the 1939 Canadian National Exposition in Toronto, marketing it as “science’s most modern miracle,” that will soon feature in every home. In 1940, the Columbia Broadcasting System (CBS) began regular black-and-white television broadcasting in the United States. In the spring of the following year, U.S. regulators adopted the 525-line resolution as the standard for the American television industry, allowing commercial television to move out of its experimental phase. However, like in Britain, the United States’ entry into the war delayed a wider roll-out of commercial television as vacuum tubes used in television sets were required for defence purposes.

Notwithstanding its success south of the border, television was slow to come to Canada. In 1947, senior Canadian Broadcasting Corporation (CBC) officials declared that “the time had not yet come for the general development of television on a sound basis in Canada.” Not surprisingly, given the burgeoning growth of U.S. television, there was criticism that CBC was dragging its feet. There were also fears that Canada was falling behind the United States and other competitors in the technology race. Two related and highly political issues were delaying television’s Canadian debut—ownership and funding. The big question was whether Canada should have a national, state-owned television network, similar to publicly-owned networks in Europe, which would promote Canadian values and culture, or allow private television networks, as in the United States, that might be foreign owned, and broadcast foreign shows. There was also considerable controversy about the cost of building a Canada-wide television network. The initial funding for CBC television was placed at $4.5 million (roughly $46 million today). Later, material shortages were also cited as delaying the building of stations, with expansion beyond Toronto and Montreal dependent on the defence production programme associated with the Korean War.

In part, the government’s hand was forced by US border stations whose signals could be picked up by Canadians living close to the U.S. border. In Ottawa, the signal from the NBC affiliate WSYR-TV from Syracuse, New York could be picked up from early September 1951. The Evening Citizen reported that a Mr Kitchen of 350 Chapel Street managed to receive a good video signal with his home-made antenna and three home-made boosters. Canadian television was finally born on 6 September 1952 when CBC’s Montreal station CBFT began regular programme broadcasts. Its Toronto station, CBLT, commenced broadcasting two days later.

First programme listing for CBOT, The Ottawa Evening Citizen, 30 May 1953.Canadian television officially arrived in Ottawa at 2pm on 2 June 1953 when CBOT, the CBC’s third station, began regular broadcasting. Using equipment supplied by Marconi’s Wireless and Telegraph Company of Montreal, the station initially had a range of only 15 miles (24 kilometres). Its signal was later boosted to have a range of 40 miles (65 kilometres). Found on channel 4 on the television dial, CBOT actually started testing its equipment roughly two weeks earlier when a microwave relay tower built on the top of the Bell Telephone Building on O’Connor Street became operational. The microwave system, which could simultaneously carry both telephone and television signals, linked Ottawa to Toronto and Montreal. After test programmes were transmitted with “astonishing clarity” over the long May weekend, the station felt confident enough to list its programming schedule for Saturday, 30 May in the newspaper, albeit with a warning that it was still operating on an experimental basis. The station, which broadcasted for less than four hours that day, started at 6.45pm with Uncle Chichimus, the much beloved Toronto-based production starring John Conway and his two puppets, Uncle Chichimus and Hollyhock. The evening’s entertainment ended with an hour of wrestling starting at 9.30pm. During these early days of television, CBOT, like the Montreal station CBFT, offered programs in both English and French, a practice that continued until Radio Canada had its own stations.  That first night’s French-language program was called Télescope. 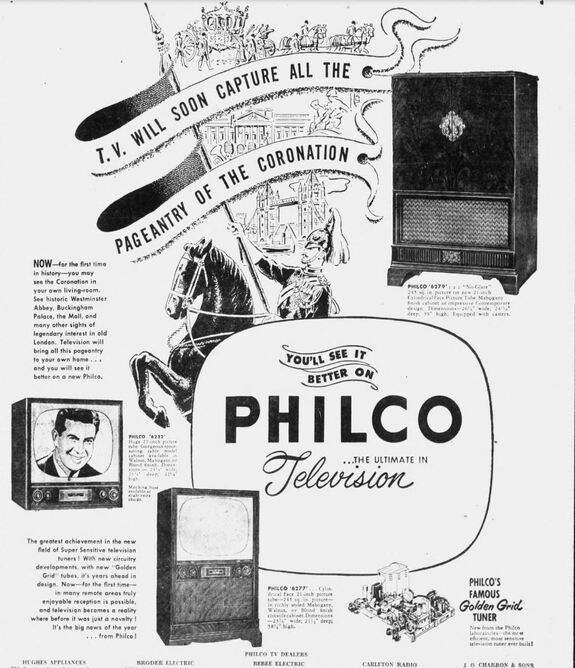 Ottawa Evening Citizen 28 May 1953.The official launch of CBOT on 2 June 1953 was timed to coincide with an event guaranteed to attract the largest audience possible—the Coronation of Queen Elizabeth II. Not only were celebratory events on Parliament Hill in Ottawa televised on the three CBC stations, but the entire Coronation ceremony from London with a delay of only four hours. In “Operation Pony Express,” three RAF Canberra bombers flew film footage across the Atlantic from North Weald Airport outside of London to Goose Bay, Newfoundland, with the first plane carrying the first two hours of film coverage, with the other two planes following with later hours of coverage. In Goose Bay, the film canisters were transferred onto RCAF CF-100 fighters for the flight to the St Hubert Airport outside of Montreal. A truck then took the film to the Radio Canada building in downtown Montreal for broadcasting, with simultaneous viewing in Montreal, Toronto, and Ottawa. Coverage of the Coronation from London started at 4.30pm, after a broadcast of the ceremonies on Parliament Hill, and the Queen’s Coronation message. Prior to the start of its Coronation coverage, CBC broadcasted a test pattern and music. Regular updates on the status of the Canberra flights were also provided. The Coronation broadcast was in black and white; colour programming would not be launched in Canada until 1966, thirteen years after colour was introduced in the United States. If people wanted to see the Coronation in colour, they had to go to the cinema when the film became available a few days later.

With the day declared a national holiday, people scrambled to find a television to watch the historic event. In Ottawa, the Radio and Television Manufacturers Association of Canada installed televisions in every school without charge to allow all students to watch the Coronation. An abridged French-language version was also televised. Naturally, parents were invited to watch as well–a good marketing ploy. Stores also offered special Coronation deals so that families could watch the events on their own sets. One enterprising store invited those uncertain about television, or were unable to afford a receiver (the price for the monochrome receiver started at $249.99, equivalent to $2,200 today), to come in and watch the Coronation on its sets for free.

From that day on, there was no looking back. Television quickly became, as RCA had predicted in 1939, an indispensable part of every Canadian household. In 1948, there were only 325 TV sets in Canada. In 1951, roughly one percent of Canadian households, mostly located in southern Ontario in range of American TV signals, had purchased a TV set. Ten years later, 83 per cent of Canadian households had a television, a higher percentage than that of homes with indoor plumbing.

Hammond Museum of Radio, 2004, “Some Dates From Canadian Broadcasting,” http://www.hammondmuseumofradio.org/dates.html.