The Arrival of the Iron Horse 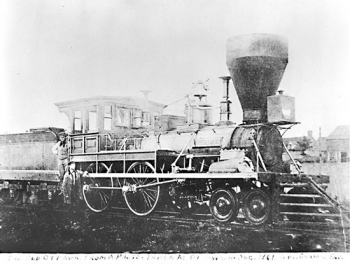 An iconic image of the Industrial Revolution is the train, powering across the countryside, with clouds of smoke and steam billowing from its locomotive’s smokestack. Not only a new, rapid form of communication, the train embodied the scientific and technological discoveries of the age, the heavy industries needed to make and power it, and the innovative manufacturing techniques required to turn out the miles of iron rails on which it ran. Within twenty years of the inauguration of the world’s first steam-powered, interurban rail line between Liverpool and Manchester in 1830, Europe and the Americas were in the grip of a railway mania, similar to the “dot com” bubble of the 1990s. Hundreds of railway companies were formed; many went bust, though not before leaving behind a massive railway infrastructure legacy. The railway transformed the economies of the world, linking distant communities and opening new markets. In the Americas, the railway provided European settlers with access to virgin territory to exploit (and native communities to despoil), and, in the case of Canada, gave birth to a nation that spanned a continent.

The first Canadian railway was constructed in 1836 in Lower Canada, now Quebec. The Champlain and St Lawrence Railroad ran between La Prairie on the St Lawrence to St Jean on the Richelieu River, a navigable waterway that debouches into Lake Champlain. The railway cut hours off the long journey between Montreal and New York City. Railway building began in earnest in Canada following the Guarantee Act of 1849 under which the Province of Canada government offered cheap financing to companies building railways of at least 75 miles in length. Additional government financing was forthcoming after the 1852 Municipal Loan Act. In 1850 there was less than 110 kilometres of railroad laid down in Canada. Ten years later, there was more than 3,200 kilometres.

Discussions to bring the “iron horse” to the Ottawa valley began in 1848. In May of that year, The Packet, the precursor of The Ottawa Citizen, began to enthusiastically promote the building of a railway between Bytown, later to become Ottawa, and Prescott, a small community on the St Lawrence River. Prescott was immediately opposite Ogdensburg, New York which was to be the terminus of a railway linking the St Lawrence River to New York City and Boston. As the only way in or out of Bytown during winter was by sleigh, a rail link from Bytown to Prescott offered the tantalizing possibility of an all-season transportation route for exporting lumber cut from Ottawa valley forests to the important U.S. markets, one that was much speedier and less costly than using the Rideau Canal or the Ottawa River that were locked in ice for four months of the year.

Prescott’s leading citizens held an exploratory meeting with engineers and surveyors in June 1848. A similar meeting took place at the Court House in Bytown the following month. Receiving wide support from both communities, the Bytown and Prescott Railway was incorporated by an act of the Provincial government on 10 May 1850. A prospectus was issued describing the length of the line, its likely location, and its construction and outfitting costs, estimated at £150,000-200,000 (£1=C$4.87). To make it pay, annual revenues of £21,000-30,000 were needed. The possibility of extending the line eastward to link up with the Lachine to Montreal railway was also mooted. The line’s chairman was John McKinnon, the son-in-law of Thomas McKay, whose company helped to build the Rideau Canal, and who was a major lumber mill owner in New Edinburgh, a village he started.

Through the winter of 1850-51, the surveyor, Walter Shanley, with two assistants, mapped out four possible routes from Prescott to Bytown, covering more than 300 miles on snowshoe. On 7 April 1851, Shanley gave his report to the president and directors of the railway company. While stressing the preliminary nature of his survey, he favoured a route to the east of the Rideau River that took the tracks from Prescott through Spencerville, Oxford, Kemptville, Osgoode, Manotick, and Gloucester, before arriving in Bytown. While the terminus at Prescott on the St Lawrence was not controversial, the location of the Bytown terminus was. Some shareholders favoured a spot beside the Rideau Canal Basin (roughly where Confederation Park and the Shaw Centre is located today), while others wanted to build the station on land originally set aside for the military between Nepean Point and the Rideau Falls. The latter option was chosen. It was perhaps not entirely coincidental that the train would conveniently pass in front of Thomas MacKay’s lumber mills. With hindsight, Lebreton Flats, which later was to become the centre of Ottawa’s lumber industry, would have been a much better location, but at the time the area was largely undeveloped.

Funds to build the railway were raised partly by subscription from private shareholders, partly from municipalities, and partly through loans raised in England and Canada. Unfortunately for the railway’s backers, the line, only 52 miles long, was too short to qualify for the provincial subsidy. However, Bytown kicked in £15,000 in equity, and, after the 1852 Municipal Loan Act was passed, provided a massive loan guarantee of £50,000. Tiny Prescott, with a population of only 2,000, provided another £8,000 in capital and £25,000 in loan guarantees. The township of Gloucester chipped in a further £5,000 in equity financing. The links between the towns that provided support, the railway’s largest shareholders, and the railway’s most prominent advocate were unhealthily close, at least by today’s standards. Robert Bell, editor and later owner of the Ottawa Citizen, was the railway’s secretary, as well as a Bytown councilman. John McKinnon, the company’s president, was the reeve of Gloucester.

Workers started to clear land for the railway in early September 1851, with the official ground-breaking ceremony held on 9 October, 1851. A celebratory parade started in front of the railway office on Rideau Street and made its way down Sussex Street. On hand for the big event, were Bytown’s mayor, members of the Town Corporation, the directors and officers of the Bytown and Prescott Railway, a senior magistrate, the area’s member of parliament, the county sheriff, and the “Sons and Cadets of Temperance” in full regalia. That evening, McKinnon and the directors hosted a self-congratulatory dinner at “Doran’s,” a top Bytown hotel. Notwithstanding the presence of temperance followers in the afternoon parade, copious amounts of champagne and wine was consumed, leading to a “number of jovial songs…sung in the course of the evening.” 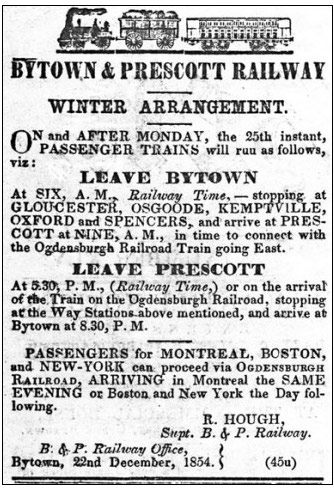 Advertisement that appeared in The Ottawa Citizen, 23 December 1854Construction was initially slow but for the most part straightforward; Shanley had done a good job siting the tracks. The most difficult part was crossing a swamp north of Prescott. Here, engineers laid down a wooden causeway as a bed for the train tracks. Once the rails arrived from England from the Ebbw Vale Iron Company in late 1853 and early 1854, the pace of construction picked up. The railway company laid down a narrow 4 ft 8 1/2 in. gauge track, commonly used in the United States and elsewhere, rather than the broad 5 ft 6 in. “provincial” gauge typically used in Canada at that time. The carriages and locomotives were sourced in the United States, with the first locomotive, the “Oxford” delivered by barge in May 1854. Two more, the “St Lawrence and the “Ottawa,” arrived in July. Immediately, the locomotives and carriages were put into service, servicing Kemptville by August, and Gloucester, just three and a half miles from Bytown, by 11 November.

When the first train arrived in Bytown is a bit controversial. An advertisement placed by the railway in the Ottawa Citizen, dated 14 December 1854, informed its Bytown customers that “trains will start from the Montreal Road near the Rideau Bridge, at the East end of Bytown, at 7 o’clock, A.M. (Railway time).” Simultaneously, the railway discontinued its temporary stage coach service from Bytown to the Gloucester train station. The place of embarkation was just outside Bytown’s city limits. Most authorities place the date of the first train as Christmas Day, 1854, based in part on a later newspaper advertisement which said the train would leave Bytown at 6am, Railway time, staring on 25 December (see above). However, in a speech given eleven years after the event, President Bell of the Railway said the date of the first train was 29 December. Differences in timing may relate to when the Rideau Bridge was finally ready for rail traffic, whether the train carried freight or passengers, or the fog of memory. The official opening of the line occurred on 10 May 1855, exactly five years after the railway company was incorporated. Its name was also changed from the Bytown and Prescott Railway to the Ottawa and Prescott Railway to reflect the city’s new name.

Like many similar ventures of the period, the railway never lived up to the hopes of its shareholders and creditors, and was quickly in financial difficulty. An economic depression in the late 1850s cut into the revenues of the heavily-indebted line. The railway’s Ottawa station was also inconvenient for much of the city’s growing lumber industry located in Lebreton Flats. The building of other rail lines meant more competition and lower prices. At the Ottawa & Prescott’s annual general meeting in May 1863, a faction of shareholders tried to seize control of the failing company; an unseemly brawl ensued. Subsequently, with the railway bankrupt, the company’s senior creditors, most importantly, the Ebbw Vale Iron Company, assumed control. Shareholders and junior creditors, including the municipalities, got nothing. Following a corporate re-organization, the line re-emerged in 1867 as the St Lawrence and Ottawa Railway. In 1881, the Canadian Pacific Railway took over the line, and began using it as a feeder link to its main east-west route. Declining traffic during the 1950s led to the closure of the line, and its rails pulled up. Much of the route was converted into a recreational path. In downtown Ottawa, the Vanier Parkway was constructed where the old Bytown & Prescott Railway used to run. A portion of the old line’s route is still used today by Ottawa’s “O” train.

——————, 2005. First Trips and Early Excursions in the Ottawa Area, http://www.railways.incanada.net/circle/excursions.htm#B&Psod.

Vanier Now, 2013. The History of the Vanier Parkway-Part One: Bytown and Prescott Railway Company, http://vaniernow.blogspot.ca/2013/02/the-history-of-vanier-parkway-part-one.html.