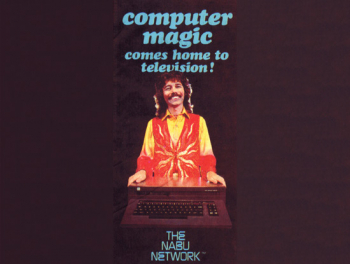 By the early 1980s, Ottawa was a hot-bed of high tech activity. Surrounding established companies, such as Bell Northern Research and Mitel, a cluster of small, ambitious telecommunications and computer-related firms with exotic names had emerged. These included Gandalf Data, Norpak, Xicom, and Orcatech, to name but a few. Many fizzed for a while, only to quickly disappear due to competition, rapidly changing technology, weak consumer demand, and inadequate funding. One that for a time stood out from the pack was NABU. Named for the Babylonian god of wisdom and writing, NABU was an acronym for “Natural Access to Bidirectional Utilities.” In its initial incarnation, the start-up was formally known as NABU Manufacturing Corporation. It was listed on the Toronto Stock Exchange in December 1982, raising $26 million in its initial public offering. The Ottawa-area company was itself the product of a number of mergers and acquisitions, including Bruce Instruments of Almonte, a manufacturer of remote television converters, Computer Innovations, a seller of computer hardware and software, Mobius Software, Andicon Technical Products of Toronto, a producer of small business computers, Volker-Craig of Kitchener, a manufacturer of video-display terminals, and Consolidated Computer Inc.(CCI), a relatively large, but troubled, government-owned, Canadian computer manufacturer and distributor. NABU bought CCI for one dollar from the federal government after the company had burned through $118 million of taxpayers’ money.

With close to 900 employees, half of whom were based in the Ottawa area, NABU had a multi-faceted business strategy. First, it planned to take on the business market, selling desk-top computers for word processing and data management. Initially producing the NABU 1100 in its Almonte plant, it released the 16-bit NABU 1600 in 1983. The 1600 version had 256 kilobytes of random-access memory (RAM), expandable to 512K, and a 10-megabyte hard drive, and used Intel’s 8086 processor. (Today’s laptop computers have eight to sixteen gigabytes of RAM, with up to 4 terabytes of hard drive, though with cloud computing, the sky is the limit for data storage.) It also came with a high density mini-floppy disk drive with storage for 800K of formatted data. Three people could use the NABU computer simultaneously doing different tasks. The price for the NABU 1600 was a breathtaking $9,800, equivalent to more than $21,000 in today’s money.

Second, NABU aimed to produce the first Canadian microcomputer for home use, taking on the likes of Commodore, IBM, Xerox, and a fledgling company that had gone public in December 1980 called Apple Computer. Third, the company envisaged selling on-line services to households. After buying or renting a NABU home microcomputer, and using its television as a monitor, a familiy could access programmes and data stored in NABU’s central server (a DEC mainframe) through a cable company’s broadband network. As the transmission of television signals only used a portion of the information-carrying capacity of cable networks, there was ample space for the transmission of other data-carrying services without degrading the television signals. The speed that the data could be transmitted on the coaxial cables employed by the cable companies (6.5 megabits per second) was also hundreds of times faster than what could be achieved over telephone lines.

By joining what was advertised as the NABU Network, cable company subscribers who bought the NABU package of services would have access to a wide range of educational and financial programmes, video games, news, weather, sports, and financial data including stock market quotations. In addition to consulting the Ottawa Citizen’s “Dining Out” guide, subscribers could read their daily horoscope, learn to type, balance household budgets, and improve their maths skills. A number of video games were also developed specifically for NABU with the help of another talented Ottawa firm, Atkinson Film Arts, featuring the comic strip characters, the Wizard of Id and B.C. In one game, called The Spook, billed to be superior to the popular arcade game Pac-Man, a player could guide a character through the dungeons of the kingdom of Id to freedom. Subscribers also had access to the space games Demotrons and Astrolander, a tennis game, and a downhill skiing game.

An even more outstanding feature of the NABU Network was two-way communication made possible by Telidon, a videotext/teletext service developed by the Canadian Communications Research Centre. NABU envisaged subscribers doing their banking and shopping from the comfort of their home. Also possible were electronic mail and remote data storage—an early form of cloud computing. In essence, NABU had foreshadowed today’s wired world, a decade before the launch of the Internet.

After rolling out their home computers at the end of May 1983, NABU launched its Network services in Ottawa on 26 October 1983. Initially, the service was only available to Ottawa Cablevision subscribers, i.e. people who resided west of Bank Street. One could purchase the NABU home computer for $950, or rent the unit for $19.95 per month, plus an addition $9.95 for NABU’s “lifestyle software.” For this price, one received the NABU 80K personal computer, a cable adaptor, a keyboard, a games controller, and thirty lifestyle games and programmes; the inventory of games and programmes later rose to roughly one hundred. For an extra $4.95 per month, subscribers had access to LOGO, an educational-based programming language, and LOGO-based programmes. NABU executives hoped to receive orders from at least five per cent of Ottawa Cablevision’s 90,000 customers within six months. In early 1984, the service was made available to subscribers of Skyline Cablevision, i.e. people who resided east of Bank Street. The plan was to introduce the NABU Network to forty cities across North American by the end of 1985. NABU’s first foray into the U.S. market took place in Alexandria, Virginia, close to Washington D.C., in the spring of 1984. To lead the U.S. charge, NABU hired Thomas Wheeler, former president of the US National Cable Television Association.

Unfortunately, things did not go as planned. When NABU’s line of business computers failed to meet expectations, the company hunkered down to focus on its more promising NABU Network. A corporate restructuring at the end of October 1983 led to the NABU Manufacturing Corporation being split into two companies, the NABU Network Corporation and Computer Innovations. The latter company quickly disappeared into oblivion. NABU Network struggled on for a time. By late 1984, it had about 1,500 customers in the Ottawa region, and a further 700 in Alexandria. This was not enough to make the enterprise viable. With the home computer market seen as being too competitive, the company de-emphasized its proprietary hardware to focus on the delivery of its software. In in a last ditch effort to attract subscribers, adaptors were offered so that owners of Commodore and other home computers could access the NABU Network.

It was not enough. In November 1984, the Campeau Corporation, NABU’s principal shareholder and largest creditor, pulled the plug on the failing enterprise. Having already invested more than $25 million, and, with little indication that NABU could attract sufficient subscribers to break even, let alone turn a profit, Campeau was unwilling to pour more money into the venture. NABU’s remaining 200 employees were laid off. John Kelly resigned as CEO and chairman of the NABU Network Corporation. Trading in NABU Network shares were suspended, with the company delisted from the Toronto Stock Exchange in January 1985. When it finally provided financial statements as of September 1984, the company had assets of only $4 million, with liabilities of $30 million. NABU shares, which were sold for $12.75 each at the company’s IPO two years earlier, were worthless.

Still confident about the concept of linking home computers to a central server using cable networks, Kelly formed a new, private company called the NABU Network (1984) to continue providing programmes and video games under licence to NABU subscribers in Ottawa; the U.S. service in Alexandria was discontinued. The new successor company hired back roughly 30 of the staff previously laid off. Subscriptions were sold door-to-door by Amway. Forever the optimist, Kelly hoped to have 6,000-8,000 subscribers by the summer of 1986. It was not to be. Limping along for eighteen months, the company ceased operations at the end of August 1986. The NABU Network dream was no more.

Why did NABU Network fail? In 1986, Kelly attributed its failure to the network concept being “ahead of its time,” and a slump in the home computer industry that killed the NABU personal computer. Part of the problem was that home computers themselves were not widely accepted; relatively few homes had them in the mid-80s. Many saw them as expensive toys rather than an indispensable part of everyday life. Content on the NABU Network was also an issue. Thomas Wheeler, who headed the company’s U.S. operations, and who is currently the chairman of the Federal Communications Commission (FCC) in the United States, attributed the company’s failure to its dependence on cable company operators for its subscribers. In contrast, America Online (AOL) in the United States, which launched a similar, but far inferior, dial-up service in 1989, was wildly successful, at least for a time. Wheeler credits AOL’s success to it being available to anyone with a telephone and a modem. Ironically, cable companies later became important internet service providers.

In 2005, the York University Computer Museum began a programme to reconstruct the NABU Network, and develop an on-line collection documenting the NABU technology. It called the NABU Network “a technologically and culturally significant achievement.” Four years later, the Museum’s version of the NABU network was officially demonstrated. There for the event was John Kelly, NABU’s president and chief executive officer.

IEEE Canada, 200? (Institute of Electrical and Electronics Engineers), The Internet Before Its Time: NABU Network in the Nation’s Capital.