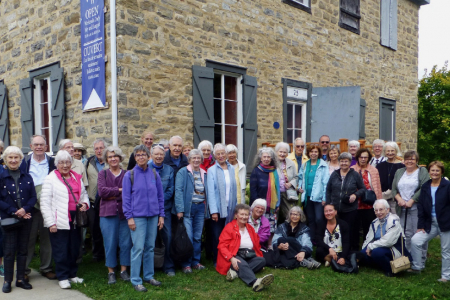 Participants in the HSO’s fall excursion to Vankleek Hill and Pointe Fortune gather outside historic Macdonell-Williamson House, an exceptional example of Georgian architecture built in 1817-1819 by fur trader John Macdonnell. The house has 12 fireplaces. Photo by Evelyn Burke

On Sunday, Sept. 15th, 42 HSO members and their guests boarded a coach and headed out to Vankleek Hill, where they visited the local museum — housed in a recently restored 19th-century general store. Participants were then split into three groups for a leisurely walking tour of Ontario’s “Gingerbread Capital” guided by Denis Séguin, the architect responsible for the restoration, the town’s ex-mayor and a well informed resident whose family has lived in Vankleek Hill for five generations.

In 1797, Simeon Van Kleeck, an United Empire Loyalist, received a land grant for his services in what is now known as Vankleek Hill.

A mural depicting 19th-century life in the town is painted on buildings on Home Street. Further along this street is the entrance to the Higginson Tower.

Many of the buildings display the craftmanship which is the source of the Gingerbread reputation earned for the town. Several beautiful gardens and trees enhance the beauty of the area.

We had lunch at Herb’s Travel Plaza on the 417, ordered from a preset menu which offered eight choices.

Then we proceeded to the Macdonell-Williamson House located at the Ontario-Quebec border. Also known as Poplar Villa, it is located on the banks of the Ottawa River in the town of PointeFortune.

The afternoon was spent at the historic house, an exceptional example of Georgian architecture in the Palladian style.

We were again split into two groups so half could enjoy their tea and scones in the formal dining room of the 200-year-old house, while the other half were guided through the building, which was expropriated to make way for construction of the Carillon Hydro Electric Dam in 1961-62.

Due to geological anomalies, the location of the dam was moved 200 metres farther upstream and the house was allowed to deteriorate until it was taken over by the Ontario Heritage Trust in 1978 to save it from demolition.

The house was built between 1817 and 1819 by fur trader John Macdonell for his Métis wife, Magdeleine Poitras, and their six children. The family expanded to 12 children but unfortunately few of the children survived to adulthood. Some unique features are a cooking hearth, 12 fireplaces, bed closets and a second floor ballroom. It served as a centre for Macdonell’s milling, general merchandising, warehousing and freight-forwarding business.

According to a plaque erected by the Historic Sites and Monuments Board of Canada, the house’s “impressive stone exterior and exquisitely detailed interior proclaimed Macdonell’s position as a major business and political figure along the Ottawa River.”

The Williamson family purchased the home and property in 1882. Over the years, they made several changes, including the construction of a verandah on three sides of the house. 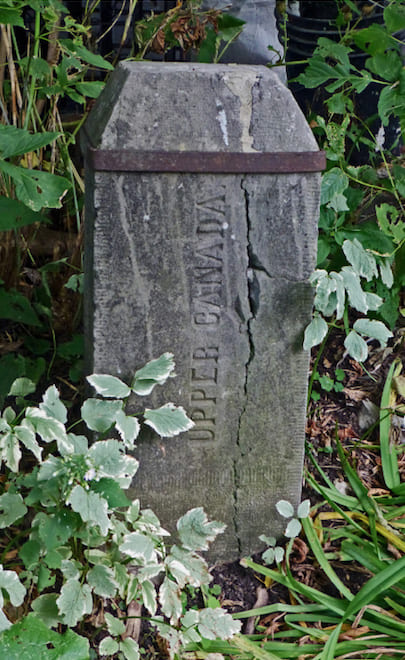 Boundary marker placed by surveyor Da- vid Thompson, circa 1823, marking the line between Upper and Lower Canada near Macdonnell-Williamson House.Owner William Williamson ran a general store in the house and later founded the Laurentian Lumber Company.

Under the Heritage Trust, the house was opened to the public in 1995. Work is ongoing to have the site restored as a Cultural Centre for local and early Canadian History.

Just east of the house is a plaque commemorating David Thompson, the surveyor who, circa 1823, marked the boundaries between Upper Canada (now Ontario) and Lower Canada (now Quebec).

Thompson (1770-1857) is described as “The Greatest Map Maker of North America” on a plaque near the site, which was erected in 2007 by the Friends of the Macdonnell-Williamson House.

The Vankleek Hill museum, left, and historic mural on Home Street depicting scenes from 19th-century life are among the attractions in the “Gingerbread Capital” of Ontario.
Photo by Evelyn Burke