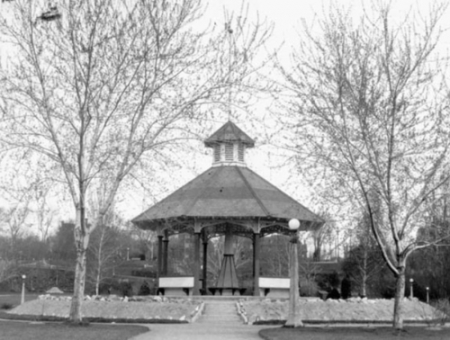 The Society’s Board of Directors is delighted to announce that it has approved a pledge of $5,000 towards a project to construct a replica gazebo at Strathcona Park. This project was proposed by HSO member, François Bregha.

At last year’s Annual General Meeting, members agreed to allocate funds to finance community projects over the coming years. Members were asked to suggest potential projects, and a process was established to choose among projects. The selection process was based on a number of criteria, including relevance to the HSO’s mission and objectives, cost, and the availability of people to take the lead on the project.

The construction of a replica pavilion at Strathcona Park has long been the dream of Action Sandy Hill, a local community group. Strathcona Park, which is located on the western bank of the Rideau River, was originally the home of the Dominion Rifle Range. During the early 20th century, the range was turned into a park by the Ottawa Improvement Commission, the forerunner of the National Capital Commission. The park is now maintained by the City of Ottawa.

The park was named in honour of Scottish-Canadian businessman, financier and politician Donald Smith who became 1st Baron Strathcona and Mount Royal in 1900. During the nineteenth century, Smith was president of the Bank of Montreal, and co-founded the Canadian Pacific Railway with his cousin George Stephen, later known as Lord Mount Stephen. Smith also for a time represented Montreal in the House of Commons. Later, he became Canada’s High Commissioner to London. Lord Strathcona was also a great philanthropist, endowing hospitals, including the Royal Victoria Hospital in Montreal. He was also Chancellor of McGill University and the University of Aberdeen.

A feature of Strathcona Park is a large fountain sculpture by Mathurin Moreau which was donated by Lord Strathcona in 1909. The four standing figures supporting a bowl represent Europe, Asia, Africa and America. Another original feature of the park was a Victorian-style gazebo, the site of many band performances and other events. Unfortunately, the aging gazebo was dismantled in 1961 and never replaced. The initiative of Action Sandy Hill to re-build the gazebo will restore a historic structure and provide a new focal point for the Park.

Planning for the structure is well advanced. Action Sandy Hill (ASH) will allocate up to $26,000 to this endeavour using money received from a developer earmarked for community benefits. The City of Ottawa has agreed to match the ASH funds. Heritage architect Barry Padolsky is contributing the gazebo design and specifications pro bono. Action Sandy Hill held a community consultation on the gazebo in September 2020 and is looking for estimates for its construction. It is also seeking funds from the broader Ottawa community to complete the financing.

The Historical Society of Ottawa is delighted to support this initiative to rebuild the gazebo and reintroduce a lost historical artifact in a well-used and much-loved park.

Published in HSO News
More in this category: « The HSO returns–virtually!
back to top