The Hanging of Patrick Whelan 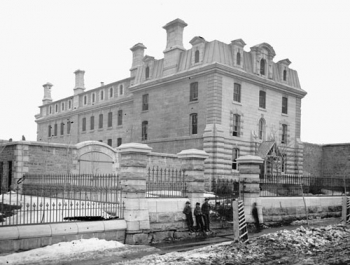 Thomas D’Arcy McGee, the much revered Canadian statesman, nationalist, poet, and orator, died by an assassin’s bullet on 7 April 1868 as he was entering his boarding house on Sparks Street. Immediately, suspicion fell on the Fenian Brotherhood, a secretive group of Irish extremists founded in the United States mid-19th century, but with cells and sympathizers in major Canadian cities, including Montreal, Toronto, and Ottawa. At that time, waves of poor, Irish immigrants were flooding North America each year to escape the potato famine, poverty, and British neglect and misrule in Ireland. Bringing anti-British sentiments with them, most settled in the major U.S. northeastern cities. Between 1866 and 1870, armed groups of Fenians, many battle-hardened from service in the U.S. Army during the American Civil War (1861-65), launched a series of raids into Ontario and Quebec from the United States in an attempt to hold the country hostage and force Britain to free Ireland. In one of the worst of these incursions, some 1,300 Fenian soldiers led by a former U.S. Civil War colonel captured Fort Erie in southern Ontario in June 1866 before being forced to retreat back to the United States.

McGee, an Irish radical himself during his younger days, had provoked the wrath of Irish extremists when he became their most outspoken critic. Being a senior member of the Canadian government, McGee was seen as a traitor to the Irish cause, a sell-out to British interests. What probably hurt the most was that McGee ridiculed the Fenians, calling them deluded and foolish. He also poked holes in Irish nationalist shibboleths, arguing that Canada under the British Crown was a far better place for Irish immigrants to settle than republican United States. Instead of discrimination and exploitation, Irish Catholics would find acceptance and equality. In Canada, Irish settlers were becoming prosperous landowners, and were well represented in the professions and business.

After McGee’s assassination, Ottawa police swooped down on known Fenian sympathizers, arresting several and held them for questioning. But a sandy-haired, whiskered man named Patrick James Whelan quickly became a subject of interest, and was charged by Detective Edward O’Neill with McGee’s murder. Police searched Whelan’s room in a nearby hotel and found copies of the Irish American, a Fenian newspaper, that had supported the invasion of Canada. Also discovered were Whelan’s membership cards and badges for radical Irish societies, and, most incriminating of all, a Smith & Wesson revolver. Power residue suggested that it had been fired within the previous two days. Later, evidence emerged that Whelan had been stalking McGee, twice going to his boarding house in the days preceding the murder. He had also watched McGee from the House of Commons visitors’ gallery on the night he died. In an odd encounter, Whelan had shown up at McGee’s Montreal home late at night the previous New Year’s Day. When McGee’s half-brother opened the door, Whelan, using an assumed name, had warned the family that their house was about to be fire bombed. Fortunately, nothing happened.

The ensuing trial was a sensation, pitting two of Canada’s top legal minds. Ironically, for the prosecution was James O’Reilly, an Irish, Catholic, Queen’s Counsel from Kingston, who excluded all Catholics from the jury on the grounds that they might be prejudiced in favour of Whelan. For the defence was John Hillyard Cameron, grandmaster of the Orange Order, a rabidly Protestant, Loyalist society. He took the job of defending Whelan on principle, and for the money; his considerable fees were paid for by funds raised by Irish Catholics who feared hasty justice.

There was general agreement that both attorneys were in top form. The defence counsel proved that six weeks before McGee’s murder a maid at the hotel where Whelan had been staying had accidentally discharged his revolver when she found it in his bed. But this did not explain the powder residue which experts testified was no more than two days old. More successfully, Cameron rubbished the supposed eye-witness testimony of Jean-Baptiste Lacroix who didn’t show up at the police station until two weeks after the assassination. Lacroix said he saw a small, whiskered man follow McGee down Sparks Street to McGee’s boarding house. But in reality, Whelan was a big man, taller than McGee. He also said McGee had been wearing a black hat whereas the hat had actually been white. The defence also presented witnesses who cast doubt on Lacroix’s reliability, and said that he had only come forward for the reward money—$10,000, a considerable sum in those days. Harder to shake was testimony that Whelan had repeatedly threatened to kill McGee, and that Whelan’s New Year’s Day visit to McGee home was an aborted assassination attempt. Even more damning was testimony by Gaelic-speaking Detective Andrew Cullen who, when planted in a nearby cell to Whelan’s in the Ottawa jail, overheard him say to a fellow prisoner “I shot the fellow…I shot him like a dog.”

Following six days of testimony, and superlative closing addresses by the two attorneys, the jury found Whelan guilty of murdering Thomas D’Arcy McGee. Whelan was sentenced to hang by the neck until he was dead. Defence counsel appealed on the grounds that the judge had incorrectly ruled that Whelan couldn’t challenge potential jurymen for cause until after he had exhausted his 30 peremptory (i.e. without cause) challenges. The appeal failed. Two days before his date with the hangman, Whelan reiterated his innocence. He told his wife that it was better to hang than to be an informer. Whelan also said that he knew who shot McGee because he had been there.

After sleeping soundly for six hours, Whelan was roused at about 5.00am on 11 February 1869. After Mass in the prison’s chapel, he had some breakfast. Despite a driving snowstorm, people started to arrive at the prison at 9.00 to get a good view of the gallows. By 10.30, a rowdy throng of some 8,000 people were crowded into the streets in front of the jail. The Globe newspaper was shocked that many respectable women were in the crowd, along with hundreds of boys and girls. At 11.00, the sheriff appeared with Whelan on the balcony, with three priests in surplices. The bound Whelan looked “pale and excited” with beads of sweat on his forehead. After repeating the Pater Noster, Whelan moved to the railing to address the crowd. He begged pardon for any offences he might have committed and forgave all parties who had injured him. His last words were “God save Ireland and God save my soul.” He then stepped back over the drop.

At 11.15, the executioner drew a white bag over Whelan’s head and adjusted the rope. He then opened the trap door, and Whelan dropped to his death. It was not an easy one. Many in the crowd clapped as Whelan kicked his heels in the air before expiring. It was the last public hanging in Canada.

Many have subsequently questioned Whelan’s guilt and the fairness of his trial. Anti-Fenian feelings were running high in Canada at the time, and McGee had been a popular politician. The evidence, while compelling, was largely circumstantial; the only eyewitness was unreliable. Jailhouse confessions also have a dubious record of veracity. Moreover, while there were no complaints about how the trial was handled, even by Irish nationalist papers, it was flawed by today’s standards. Sir John A. Macdonald, the Attorney General as well as Premier, sat beside the judge during Whelan’s trial. While his presence didn’t raise negative comment at the time, it would be seen as prejudicial today. As well, the judge, William Richards, who presided over the trial had been appointed to the Court of Appeal by the time defence counsel launched an appeal. As a consequence, he sat on the court that listened to the appeal of his own ruling—a clear conflict of interest. He also sat on the bench when a subsequent appeal was made. In both cases, he made the deciding vote. However, the breach in court procedure regarding the selection of a jury by the defence was highly technical, and it’s hard to see how it might have affected the course of the trial.

Modern-day ballistic tests were conducted in 1973 on Whelan’s Smith & Wesson revolver and the bullet that killed McGee. However, owning to corrosion, it was impossible to conclusively say that the bullet had been fired from McGee’s gun. It would, of course, have be impossible for the tests to determine that it was Whelan’s hand that had held the gun.

Whelan was likely a Fenian, and he certainly held a grudge against McGee. His own words prior to his execution placed him at the scene of the crime. But there is no hard evidence that he was the triggerman.

The fascinating story of Whelan’s innocence or guilt is the subject of a play Blood on the Moon, a one-man production written and performed by Pierre Breau. The play premiered in 1999 in Ottawa in the same building that once was the court house where Whelan’s trial was held and adjacent to the prison where Whelan was hanged.

The Globe, 1869. “Execution of Whelan: Closing Scenes and the Agony of Death. A Short Speech and No Confession,” 12 February.

The Montreal Gazette, 1973. “Ballistic Experts Not Sure on Gun that Killed McGee,” 19 October.