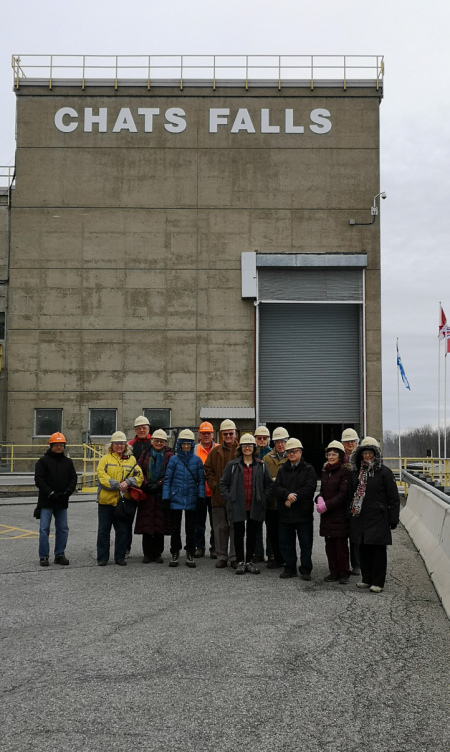 A brisk wind greeted us as we stepped onto the roof of the Chats Falls Hydro Power Generating Station situated on the Ottawa River at Fitzroy Harbour, across from Quyon, Que. Twelve HSO members and friends braved the November damp and chill to explore this fascinating and crucial component of our community. Our host was Gary Kowaluk and two of his associates. From the rooftop we could see this long rectangular building stretch across the Ottawa River, straddling the two provinces. The view of the Lac des Chats reservoir was spectacular. Large sections around the dam are fenced off to protect onlookers from falling into the turbulent waters. Gary pointed out how giant sliding gates control the amount of water flowing through the station.

Our tour had begun shortly after 9 a.m., when we passed through a high chain-link gate, driving down a long narrow road through dense woodland and over three bridges. The drive was reminiscent of entering a Cold War facility in post-war Europe. Over the bridges one could look down and see the remnants of what would have been the sides of the Chats Falls, where large boulders rested with only a trickle of water splashing between them. The 35-foot falls were destroyed to accommodate the power station, built 1929-31.

Now in operation for nearly 90 years, the facility provides renewable energy that is 99% free of air pollutants and greenhouse gas emissions. At maximum output, the plant could power nearly 200,000 homes. Output varies upon demand as well as precipitation that affects water levels, which are constantly monitored for environmental balance to minimize any possible damage.

We then viewed a film made during the construction of the dam and station. Grainy black and white images showed many men at work. The hydro village in Fitzroy Harbour was created to accommodate many of the workers who stayed for the duration of the project, bringing considerable activity and revenue to the village.

After the viewing, we started through the plant, which included our rooftop excursion. We saw firsthand the two-storey-high turbines at the heart of the energy-generating process that powers our modern life. We even journeyed beneath to glimpse in the dim light where the power of nature connects to the ingenuity of human machines.

Many thanks to Gary Kowaluk, his staff and the good people who joined us, and especially our past president George Neville, who first suggested it as a part of our fall excursion, as his own father had worked on the construction of the dam.

Published in Special Events
More in this category: « HSO Members Tour Historic Tucker House History Lives on at Beechwood »
back to top