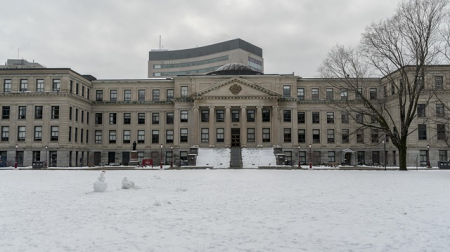 One early April afternoon, Karen Lynn Ouellette and myself had the honour of attending the last class of Dr. Sarah Templier’s Canadian Digital History course at the University of Ottawa. This was a big day for Dr. Templier’s students who in groups of two or three presented their digital history projects. All the projects were related to the Historical Society of Ottawa. Besides enjoying the wonderful presentations, our job was to help Dr. Templier and PhD candidate, Celeste Dagiovanni, to judge the students’ work, and to select the top three projects. Celeste is the student coordinator of the Venture Initiative Program working with Fahd Alhattab who is in charge of the program as the entrepreneur in residence at the Faculties of Arts, and of Social Sciences. 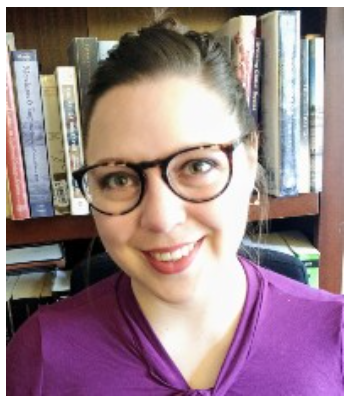 Sarah Templier, University of Ottawa.The idea of partnering with the HSO was the brainchild of Professor Templier. Before the start of the semester, she had contacted Karen Lynn with the idea of involving her fourth-year digital history students with the Society in some fashion. A number of ideas were floated, including going through the Society’s archives held by the City of Ottawa to document and digitize key documents. However, with the City Archives closed owing to Covid, an alternate project was selected under which student teams would develop websites that contributed to the HSO’s mission and online presence in a meaningful way.

In teams of two or three students, five website projects were presented—Epidemics in Ottawa by Jessica Barton and Victoria Pope, Ottawa and the Fur Trade by Danny Bengert and Jordan Johnstone, The Rideau Canal by Charles Wickens, Breanna Campbell and Jameson Holdip, The Murder of Thomas D’Arcy McGee and the Fenian Brotherhood by Jack Lapalme and Thomas Wagner, and The Galloping Gourmet by Rowan Moore and Brenna Roblin. The projects were judged on the basis of how the project contributed to the Society’s on-line presence and mission, the team’s research and ability to reach the target audience, their innovative use of visuals and digital tools that would enhance a reader’s experience, and the ability of each team to effectively “pitch” their project in the allotted time and answer questions.

All five presentations were excellent, making the choice of the top three very challenging. After more than thirty minutes, judges agreed that the top three presentations in order of preference were The Galloping Gourmet, The Rideau Canal, and Ottawa and the Fur Trade. Rowan and Brenna’s winning entry on the television show filmed in Ottawa from 1968 to 1971, styled their presentation in the form of a TV Guide. Their presentation featured recipes, a map of the locations Graham Kerr, a.k.a. the galloping gourmet, visited to inspire his recipes, an interview with a participant who viewed the filming of an episode at the Merivale Road studio, fashion in the 1960s, as well as a section on Graham Kerr’s life after the series ended. Their lively and fun presentation helped to bring to life the late 1960s as well as a little-known part of Ottawa’s television history. It is sure to delight Ottawa history buffs.

In second place, Charles Wickens, Breanna Campbell and Jameson Holdip’s presentation on The Rideau Canal had several innovative features. It was bilingual and acknowledged that the Canal cuts through Indigenous territory. The “then and now” feature was well done. In addition to the usual history of the Canal, the website featured sections on the financing of the canal and what the life of a labourer would have been like. The team noted the importance of the HSO highlighting the significance of the Canal for Ottawa’s upcoming bicentennial.

The third-placed presentation on Ottawa and the Fur Trade by Danny Bengert and Jordan Johnstone provided a useful reminder that life existed along the Ottawa River before the establishment of Bytown by European settlers. It filled a big gap in the HSO’s coverage of Ottawa’s history and heritage, highlighting the contribution of the area’s original Indigenous inhabitants to the fur trade in an engaging and informative fashion.

While the final two presentations on Ottawa pandemics from the early 1800s to the present by Jessica Barton and Victoria Pope, and on the assassination of Thomas D’Arcy McGee by Jack Lapalme and Thomas Wagner did not make the top three, they too treated their subjects well and provided useful insights. We wish we could have provided prizes to all the presenters.

After the students complete their projects, the HSO intends to link the Society’s website to the five student websites so that all those interested in Ottawa history and heritage can benefit from them. As thanks for their hard work on behalf of the Society, each student was given a copy of Controversy, Compromise and Celebration: The History of Canada’s National Flag by Glenn Wright, as well as a one-year membership in the Historical Society of Ottawa. The University also gave cash prizes to the top three projects.

We hope all those who participated in this digital history project learnt a lot about Ottawa’s rich history and had fun in the process. The Society would like to thank Dr. Templier for an excellent initiative and looks forward to future collaboration in the years to come.